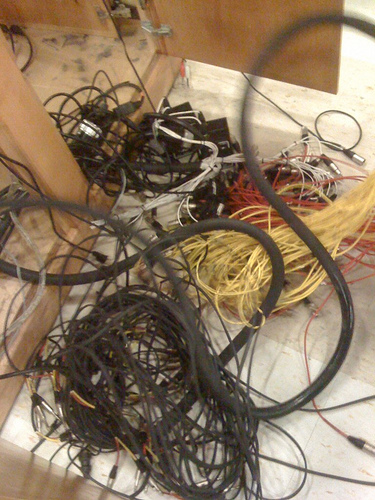 A few of us were recently asked a troubleshooting question on Twitter, and this seemed like a good opportunity to talk about the subject. If you’re a troubleshooting ninja this is probably going to be below you, but if you often feel overwhelmed when trouble arrises and don’t know where to start, this is for you.

When I would talk to my crew about troubleshooting, the first thing I always mention are checking the 3 “P’s”. These are three things that, in my experience, are the leading cause of trouble in probably 80-90% of audio issues.

If we’ve checked all these things and there’s still an issue, we’re going to have to do some real troubleshooting. I have a very simple system for this when I’m troubleshooting an unfamiliar issue:

Start at the source of the sound and work through the signal path.

The reason for this is very simple. It’s important to be as systematic as possible when troubleshooting things. If we run back and forth checking things all over the place, it’s very easy to overlook or miss something. However, if we start at one end and work to the other it’s easy to be thorough one step at a time instead of trying to think through hundreds of possible causes.

Audio signal paths may seem complicated at times, but in most cases if we step back and follow them from the source of the sound to the speakers they’re not so complicated. Signal paths are generally very linear which makes them relatively easy to follow. For example, here’s a typical vocalist’s signal path:

This is simplified a bit because there would likely be a deeper signal path within the console involving any processing such as EQ or compression being done to the vocal, but that’s actually not important at this stage for me. The goal in this stage of troubleshooting is to isolate the component that’s causing the problem, and here’s the important thing to always keep in mind:

Every point in our signal path is a potential point of failure.

Every location where we can break the flow of signal is where something can go wrong. If there’s a connector of some sort in use, that’s our first clue it’s something else we need to check. This is why it’s so important to understand signal flow in audio. If you don’t know how your signal gets from A to B, you’re going to have a hard time finding and fixing issues that crop up.

Once we’ve isolated our problem to a specific component, we either need to replace that component or investigate further. For example, if we find a mic cable is bad, we should just swap out the cable and move on with things. If it’s a console issue, however, things could be more complicated. So, again, we start at the source of our signal and follow it through the signal path until we isolate the problem component. So I’d start at the channel input, check the gain, check the EQ, check any insert points, etc, etc, etc.

I’ve found this approach leads to finding the problem in almost all cases, however, there can still be some tricky situations from time to time. For example, digital clocking issues can be hard to find. The distortion issue we faced last year was also particularly difficult to track down; you can read about that here and here.

So what do you when the signal path seems to be clear, and you can’t isolate one component as the problem?

The first things I look at are places where outside devices connect to my system. In other words, when I know all of my equipment is working fine and there’s still a problem my goal is to isolate my equipment from anything external to my system. For example, with a clocking issue I would want to examine anything that connects to my system’s word clock inputs or connects to my system digitally. Buzzes and hums can be caused by things sharing the same circuits as audio gear so I would start hunting for those. I’ve had guitar amplifiers with wonky power supplies cause problems throughout an entire system.

The other thing I start thinking about is if anything has changed with my system or any systems that come in contact with my system. Did I add new wireless mics? Did I add a new dropsnake? Did video world just get an upgrade? Did the broadcast console just change out? Did the electrical transformer get replaced? Also, did anything happen to my gear recently? Did someone drop that mic? Did someone drive a lift over a snake? Etc.

So, this can obviously get complicated. As you gain experience dealing with audio issues, you can often learn to identify the cause of issues simply by what you’re hearing. For example, RF hits and dropouts to the uninitiated can be just random hisses. Digital clock issues exhibit as random clicks. Distortion can be a variety of things, but you can learn to identify when it’s digital and when it’s analog clipping and what that likely means in terms of the problem.

When you don’t know what the problem is or where to start looking, the important thing to remember is to always try and be as systematic as possible and to work through things in a linear fashion as much as possible. Start at the source of your signal and work through your signal path until you isolate the component giving you trouble. And when I say start at the source, I mean the ACTUAL source. You may be surprised at what is actually causing your problem. For example, I’ve had vocalists with voices that distort naturally when they sing right in front of you, and there’s nothing you can do on the audio side to fix that. 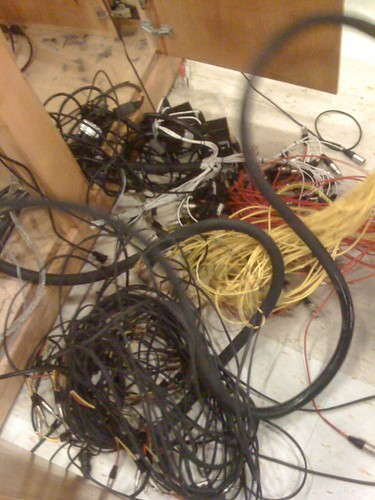 3 Responses to “When There’s Trouble”