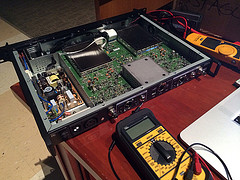 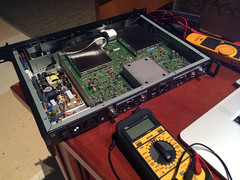 If you’ve been following along on social media, you might have noticed that we’ve been working through what has turned out to be the most frustrating and perplexing technical issue I can remember dealing with. So here’s what happened.

On Monday we hosted the Catalyst One Day conference. I was on site at about 6am to get things ready for soundcheck and rehearsal so this is when everything got powered on. I mixed FOH for the conference, and everything went as smoothly as these sort of things can go. Working conferences has always been a mixed bag for me, but this was one of the good ones from a work perspective. The conference wrapped around 4:30pm, and we took a break for about a half hour while some crew switched out before an event we were doing that night for our volunteers that would feature a lot of the same musicians and speakers from the conference.

The band started soundchecking around 5pm and pretty much immediately began to complain about the lead vocal being distorted in their monitors. I pushed things up at FOH and could hear it, too. The next hour or so began what would be a week of troubleshooting. Our monitor engineer and monitor tech tried a bunch of things backstage, and the issue seemed to minimize, but there was still audible distortion when the band took the stage at 7pm for the first song. I was disappointed we had this distortion happening, but in some ways I felt like it sort of fit aesthetically with the song and wouldn’t be noticed negatively.

Then our campus pastor walked up to welcome everyone using our spare handheld, and what do we have? Distortion. So now it’s on two handheld mics. When our first speaker hit the stage: distortion. I can’t put into words the freaking out going on in my head at this point.

We have twenty channels of Shure UHF-R receivers that are about 6 years old, and suddenly they were all distorting. I have been extremely happy with these units and found it very hard to believe that they would all suddenly crap out at the same time. Our monitor engineer came up with an innovative solution using the headphone jack on one of the units that seemed to minimize the issue so we could get through the night, but I knew I had my work cut out for me the next day.

Interestingly, we’d had a similar issue crop up a couple weeks before this in the afternoon before our PM services, but the issue was unrepeatable the next day and seemed to clear up. Unlike that week, though, this one hasn’t. At this point I’ve spent pretty much every waking moment this week troubleshooting or thinking about what could be causing this issue, and at this point I’ve tried pretty much everything I could think of.

I’ve used different output connectors, different power, bypassed the split, tried whip antennas, checked it on different consoles, tried different transmitters, taken things offsite, taken things to other parts of the building, pumped 1k tones into things, brought in a unit from another venue to compare, and on and on and on and on. The only thing I haven’t tried is to use a completely fresh unit, and one arrived on Friday from Shure to do some testing with. I also shipped a unit to Shure for them to check out because they are just as puzzled about this as I am.

In fact, there are a lot of people scratching their heads on this one. I’ve talked to or emailed as many people in the last week to try to get some insight on tackling this issue as I probably did all of last year. I have absolutely no idea what’s going on.

Now, it’s possible maybe something electrical happened and fried the rack all at once, although I’d be surprised if that’s the case since all our gear is protected by UPS’s or at a minimum some form of surge protection. My hope, though, is something did damage the units and Shure will confirm that when they get one of the receivers on their bench. This would be the easy fix because we just ship it all off for repair, figure out if there’s a way to prevent this from happening again, and get back to business.

But if that’s not the case, I’m pretty much out of ideas at this point.

In the meantime, the Production Director for our Students loaned us his ULX-D travel rig so that we can make Sunday happen with some RF units in one of our auditoriums. I hardwired some mics in the other auditorium to make that one happen.

I’m hoping on Monday we’ll find something out where we are kicking ourselves because it should have been obvious. Then I can put do a post titled “I’m an Idiot”, and move on. But in the meantime, I am very perplexed by this.