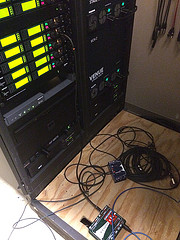 I’m Not An Idiot 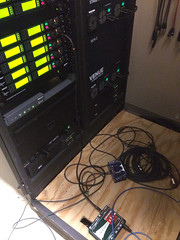 OK, I feel like I can finally get into this now so let’s talk about that distortion I was having on my RF mics. When I left off on the issue last month, we didn’t have a clue what was going on. We had borrowed some ULX-D mics from our Students, and they seemed to be getting us by while we tried to track down the problem. However, a couple Sundays later the distortion re-emerged in the afternoon while using the borrowed ULX-D rig. The distortion also reemerged on our keyboard lines.

Yeah, I didn’t mention the keyboards in the first post about this because when the distortion appeared on the keys on that Monday night, I initially thought they were two isolated incidents. Apparently they were not.

So while I was on my way back to our campus on that Sunday afternoon after getting the call the problem was back, I started thinking through what changed recently. Every time we would think the problem was fixed, it would suddenly pop back up so I started to think we were looking in the wrong places. Running through possibilities, the thing that stood out in my mind was our new studio console.

The studio console creating the problem didn’t make sense to me. The studio gets its power from our super-duper UPS that will keep our entire video world running in the event of a blackout. The console connects via fiber to its SD racks in our equipment room, and they are connected to one of the isolated splits off our 3-way analog split. So, basically, everything should be isolated from everything…right?

It was a far-out idea, but after two weeks without a clue what was causing the problem, far-out wouldn’t surprise me.

When I arrived back at North Point, I asked our team if they had checked to see if the issue was happening in the studio. They said they hadn’t had time, yet, so I headed into the studio to check the issue only to find everything powered down. I started powering everything up and got it all working just in time for the start of our 4:30pm service.

Everything sounded clean and clear when I solo’ed inputs in the studio. I then walked out to FOH where everything also sounded great. So I started looking for my Production Director to chat about my latest harebrained theory: when we power off the studio, everything falls apart.

It was the one changing common denominator I could think of. When we hosted Catalyst, the studio was running all day while they recorded the music in the studio. Then the studio powered off at the end of the day around 5pm when the issue appeared. Just when I thought the issue had disappeared, we had distortion on a Wednesday night rehearsal while the studio wasn’t in use because we had rehearsed that auditorium earlier in the week. The weekend before, everything had been fine all day, but the studio was also powered all day and didn’t get powered down until after the last PM service. Then on that Sunday afternoon when I arrived, I found the studio powered down.

In between services, I powered the studio all the way down. We checked the mics and keyboard lines, and they were all distorting. Next I started powering up the studio gear. I started with the SD racks which didn’t completely fix the issue. When I powered up the actual console in the studio, and it took control of the SD Racks, I immediately got a call on the radio that the distortion had stopped.

So what’s going on exactly?

I’ve traded a lot of emails with Digico who were very helpful in figuring out what’s going on, and this is not a bug. This is actually a feature. As I understand it, the preamps in the Digico use a bit of active circuitry to protect the preamps from excessive voltage. When the SD rack is powered down, it essentially goes into protection mode which changes the impedance on our entire system resulting in audible distortion on our other consoles.

Now, I’m still not exactly clear on why this happens because the electrical side of audio isn’t my strong suit. I’ve spent the last couple of weeks trying to understand this better, so maybe someone smarter than me can shed some light on this in the comments.

At the same time, in some ways it doesn’t really matter, though, because the good news is we found the source of the problem. The solution is also pretty simple because we just keep the SD Racks powered. As long as they don’t go down, everything is happy.

I’ve had some weird issues pop up in my career, but I feel like this has been the most perplexing and definitely the least fun issue I’ve ever had to troubleshoot. So I just want to give a big shout out to my friends at Shure, Avid, Digico, Clark, and Moyers along with many of my other engineer friends for all their help and support in trying to figure out what’s going on. It’s comforting to know that when something mysterious like this happens, there are a lot of folks interested in helping. I was going out of my mind on this, and I don’t think I ever would have figured it out without all the help and support we received.