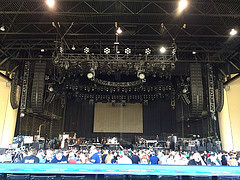 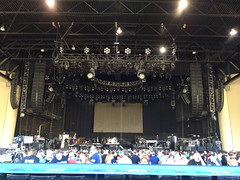 I learned a new trick this week while listening to the UBK Happy Funtime Hour, which in spite of the title never seems to be anywhere near an actual hour. Gregory Scott had a great little trick that I can’t believe I had never tried before considering it’s so simple.

Next time you get your mix up and going and in a happy place, swap your left and right and sit back and listen.

So simple, right? Why is this a great mixing trick?

Well, you might recall my experience last fall where I was freaked out on the other side of the aisle. This little trick can create a similar experience. The thing that happened last fall wasn’t fun initially, but ultimately it helped reveal some stuff in my mixes that I was probably missing more than I wanted.

You see, it’s very easy to get used to hearing things certain ways especially when you are mixing in the same environment all the time. Swapping the left and right forces you to listen from an alternate perspective. It creates a wake-up call for a brain that is expecting the exact same thing.

This is also a great trick if you’re mixing live in a FOH position that isn’t in the center of the room. Flopping your left and right offers a perspective of what’s happening on the other side of the room. If you’re doing any sort of panning of instruments, this can be a great tool to make sure what you’re doing in your mix isn’t negatively impacting one side of your room.

I actually built a swapping ability into my normal template on my console using the VENUE’s snapshots. I feed the PA via the matrix section of the desk using stereo matrices so I created a couple of snapshots that alternate the panning of the PA outputs. Then I used the console’s Events settings to configure a function key to fire these snapshots using a couple of events. When I press and hold the function key my PA swaps the left and right. When I release it the PA goes back to normal. This lets me do a quick check in the middle of rehearsal.

I deliberately set this up so I have to hold a key to listen to the swapped sides. I did this so that I would be forced to just listen without immediately reaching for a fader or a knob. If something’s off, my thought was when I go back to the normal setting I should be able to identify that issue.

I’ve used this little trick live during a rehearsal as well as with virtual soundcheck, and both methods work with similar results. However, I don’t think it would be a good idea to use this during an actual service or event unless it’s for a specific effect.

What little mix tricks do you use to keep your mix perspective fresh?