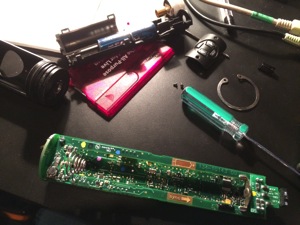 I’ve been getting questions about a couple of projects from the past week so here’s a little more info than social media can provide.

First up are some new battery trays I installed in our Shure UR2 handhelds. Adam Dye told me about these out at Seeds earlier this year. I don’t know if it’s a new part or just an alternative, but the deal is Shure has a replacement battery tray for the UR2’s that will better accommodate wider batteries such as the Ansmann rechargeables. I got the part # from Adam, and I ordered them through one of the Shure dealers we work with.

Now before you go trying to order this part, keep something in mind. Changing these things out isn’t necessarily hard, but it’s not for people who are uncomfortable working with sensitive electronics. There’s not necessarily soldering involved, but if Shure did the swap I could see where they might do some. Doing this kind of work will likely also void your warranty. Our mics have been out of warranty for several years, and I don’t mind tearing things down so I was open to giving this a shot.

I used my emergency spare mic as a guinea pig for the first install, and when it came out fine I went and did all of them. It took on average around 10-20 minutes per mic, and I was able to change all of mine out in between meetings and some other little projects over the course of two days. I only had one casualty with one of the IR sensors for sync’ing, but the mic itself still works so that one will just end up in the shop with the next repair shipment I send off to Shure. Our Ansmann’s slide with ease now, though, so it was worth the time and expense in my book.

I’m not sure how Shure feels about end users doing this kind of work, but there’s probably a reason why you’re not going to see this part advertised on Shure’s website. So if you want to try and do this yourself, you’re doing it at your own risk. When I ordered these, I was naively thinking they would just be plug and play, but that is definitely not the case. I didn’t mind installing these myself, but if I had known what was involved before ordering the part, I probably would have just sent them off to Shure to refit a few at a time. 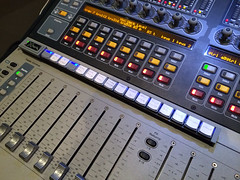 The other thing I added last week was an X-Keys 16 key stick out at FOH. These are basically 16 keys I can program to do whatever I want. The stick connects via USB, and comes with software to program what each key does.

I know my buddy Mike Sessler was using one to get extra macros on his console, but I got the bug to try this out from Brandon Thompson, our Production Director over at our Watermark campus. While it wasn’t fun to try and figure out how to program it at first, Brandon walked me through it, and I feel like I’ve got a good working first stab at using it now.

I’m basically using X-Keys with a Mac Mini to control three applications I use when I’m mixing FOH: Smaart, Meyer Sound’s Compass, and Wireless Workbench. I have each application assigned to a key so I can quickly bounce between applications without needing a mouse or full-size keyboard. Then I have keys for each application to handle common keystrokes I would do in those apps. For example, I have keys set for Smaart to toggle my target curve on and change between some custom views I use.

For example, I recorded a workflow that gets Smaart up and running for me. If I press my “Smaart” key on the X-Keys stick, the software launches. Then I have programming so if I hold the key for 2-3 seconds, it runs an Automator workflow that sets up my SPL monitoring input and starts up my RTA’s for me. I also have workflows that do things like change SPL monitoring in Smaart between A-Weighted Slow and a 2 minute LEQ or select different RMS monitoring in Compass which I use to monitor our PA’s performance.

The X-Keys basically put a lot of things within reach that I always needed either a mouse or a second keyboard to do. It doesn’t do everything for me, but I’ve got most of the main stuff I would do on a weekly basis on a single key sitting on my console now. This is just another tool so I can stay primarily focused on the mix without having to do technical stuff.

X-Keys makes a bunch of different size controllers so if you have a need for something like this, check them out. With a little bit of creativity, I think you could program these things to do just about anything you want on a computer.