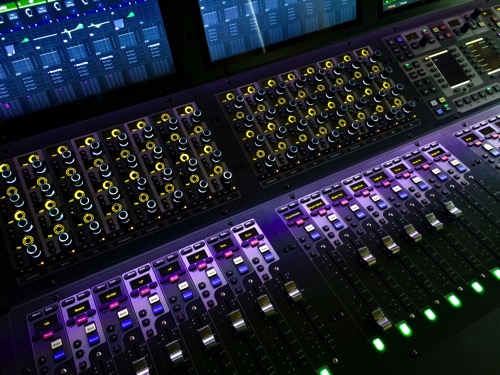 A lot of mixing is mindset related, and this is something I’ve been thinking about a lot on recent training visits. The churches I visit are enthusiastically looking to get great sound. They’re trying to figure out how to get the best sounding drums, vocals, guitars, etc. I think this stuff matters and I love helping engineers discover new ways to get the sounds they are after, but it’s just not everything to me.

Great sounds are definitely part of audio production, but I’m just more interested in the parts. This is a little hard to explain in writing, but I’m going to give it a try.

To me, within just about any song are sort of key elements or parts. No matter how layered something gets, if it’s a decent song there are almost always certain things that kind of stick out to my ear and in my brain on a first listen. These are the things that, to me, really make the song what it is sonically once you go beyond the basic lyric and melody. So, let’s look at a song.

Here is the original recording of Still Haven’t Found What I’m Looking For by U2.

There are a LOT of layers of guitars in this song, and they evolve and change over the course of the song. Some are more sustained throughout the song while others are just little bits here and there. All of this changing within the song keeps the recording interesting. If you didn’t notice them all, I suggest going back and giving this another listen. You can try counting every new guitar part you hear.

In all of those guitars, there is one part that stands out to me as “the song”. Without that part, it’s not really Still Haven’t Found What I’m Looking For. The band knows this as well and demonstrate this in a live version of the song which will also help clarify the part I’m talking about.

All those layers from the record are gone when they do this song live. That main guitar part is slightly different as Edge added a couple of extra notes sort of culled from a different part on the recording. The core of the part is still there and loud and clear, though.

When I’m mixing any song, I’m looking for parts like that guitar part in Still Haven’t Found. The parts aren’t always guitar and could be any instrument being performed. When I find those parts, I want to make sure they are audible in the mix and doing what I feel they should be doing from a musical standpoint.

So let’s look at a relatively recent worship example. Here is Love So Great performed by Hillsong Worship. It’s a few years old now, but I still find a lot of churches doing it and even some just beginning to add it.

I like this song as an example because there are a few different parts that jump out at me, and they’re not all played by the same instrument. So here’s what sticks out to me:

First off, the guitar in the verse is a big deal to me. Its syncopation with the chord changes helps it stand out. Then in the pre-chorus it continues to grab my attention especially as it plays in between the lyrics. Things shift in the chorus, though, and I’m drawn to the high synth part. There’s also a high guitar part in the chorus that is kind of cool, but it’s not as important to me as the synth and doesn’t really matter until the 3rd chorus. In the instrumental after the second chorus, the synth arpeggio is the big thing, and then it comes back in the bridge.

If I’m mixing this song, one of the first things I’m doing is trying to figure out where those parts are and who is playing them. Similarly, when I’m mixing other songs I’m searching for that song’s particular parts that make that song tick and who is playing them. It doesn’t matter if I’m mixing a song live that I’ve heard a hundred times or a new song for an artist. I need to find the parts that really make it what it is.

Part of the reason I bring this up is I get a lot of compliments regarding separation in my mixes along with requests to learn how I do it. I’ll admit there is definitely a bit of technique to making separation happen that I share regularly on training visits. However, a big driver in that separation and/or perception of separation is finding those parts and giving them a place in the mix to be heard.

I don’t think there is always as much separation in my mixes as I sometimes get credit for, although, I’ll take the credit every time. The reality is, if we really got everything hyper-separated in modern music, it would overload the brain. According to mix engineer Jack Joseph Puig, we can’t really hear more than three things at a time.

One of the things that gives that perception of separation, though, is when you hear the parts that matter at the right times in a song. If you’re just pushing up the faders and creating some kind of mashed together mix without anything distinct, it’s not going to sound like there’s separation. It ends up just sounding like a wall and sometimes a wall of confusion. We can even run into some of the same problems when we prioritize the wrong parts.

When we start sorting and prioritizing things so not everything is as loud as everything, we start to give things more or less focus in the mix. And as things come in and out of focus at the proper times, the listener feels like they can hear everything.

If you’d like to learn how to get more separation in your mixes, let’s chat. In the meantime, just start thinking about what parts matter most in a song and make the most of them in your mixes.