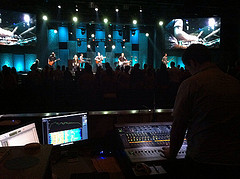 Freaked Out on the Other Side of the Aisle 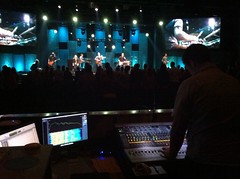 Well, I’m slowly making my way back down to earth from the PA extravaganza of the last couple weeks. I feel like I kind of disappeared from here early on in week 1, but now that my brain is moving past the PA I’m starting to write again. I want to start with a little story about the new PA that I’ve been sharing with our FOH engineers.

On Tuesday night of the install week, I was a little freaked out. The boxes were all up, and I was standing at FOH listening to some reference stuff with a rough EQ on the mains. I was getting a little freaked out because the imaging just seemed way off. A couple of our non-audio production guys walked into the room and pointed out exactly what I was hearing before I could say anything. Needless to say, this set off alarms in my head.

The riggers were pretty sure the arrays were identical, but I didn’t go home that night feeling warm and fuzzy. I figured we’d be moving the arrays on Wednesday morning for sure. This didn’t excite me because I knew it would eat up the time we should be using to start optimizing the system.

So on Wednesday morning Steve Bush from Meyer Sound arrived so we could start dialing in the system. After he walked around, looked at things, and did an initial listen I mentioned my concerns because before you do anything electronically you’ve got to get the boxes aimed right.

Steve looked very closely at the arrays from a few different locations and assured me that if anything was off it was by less than a degree. Then he told me a story.

A lot of the guys who do theatre stuff have a policy. Since theatres typically have a center aisle, a lot of these guys have no choice but to setup FOH on one side of the aisle. So when they do set up off-center, they always set up on the same side.

I thought about this a bit and it made sense, but here’s the thing: when you put someone like Steve Bush and me in the same room, there are going to be a lot of interesting–to me at least–tangential audio geek conversations. It’s like audio geek vomit to people who carelessly wander in with a pink noise backdrop. Steve’s story was definitely something to think about, but I filed it in with a lot of the other stuff we were talking about that day so that we could get on with dialing in the system.

That night we had our first rehearsal, and I ended up covering for our FOH engineer who would be mixing on Sunday; I deliberately booked someone else to mix the first week, but that’s a story for another time….

The PA imaging bugged me for most of the night. Sonically everything seemed to be in order, but it just didn’t feel right.

Now, one thing to understand is our new setup is nearly identical to what we have in our East Auditorium. I’ve been pushing towards this for seven years, and the new PA was the last big piece of that puzzle. However, there is one thing I can probably never change: our FOH positions are different. They are both just a bit off-center in each room, but they are on different sides of the room.

After a bit of mixing and thinking about what Steve shared earlier in the day, I walked around our camera platform to where the mix position sits in our other auditorium and immediately started laughing. It felt just like the other auditorium. And in a way this also kind of freaked me out.

So there were a couple of lessons for me in this.

I’d rather be in the center, but Lesson One is you always setup on the same side of the aisle.

Lesson Two is to be careful with what you get used to.

When I walked around to the mix position I was used to, it freaked me out a bit because it revealed a potential trap I had fallen into. Getting used to your room and what things are supposed to sound like at FOH isn’t a bad thing. In fact, I think it can lead to better mixes in most situations; some of us call this learning the room. However, this can also easily blind us to things if we’re not careful because our evaluation process starts to get a fixed set of criteria to evaluate against and sometimes that set of criteria is incomplete.

Hearing the imaging on the new system differently than the other room really got me thinking a bit about some of the imaging I’ve been doing in my mixes on our system(s). I’ve talked a bit about this before and how I’ve typically gone for a wide-mono kind of thing, but I’m re-examining some of that now specifically in regards to how wide wide-mono can be.

After spending most of my time in the West Auditorium with the new system for the last two weeks, I’m hearing the system in the East Auditorium a little differently. The new system was been great not just in terms of bringing higher quality audio than our previous system, but also because it is forcing us to listen with a new perspective. The end result of this is going to benefit both of our rooms.

So I guess my advice is, if you’ve been mixing in the same room in the same position for some length of time, do yourself a favor and try and figure out a way to force yourself to hear things different than you’re used to. You might be surprised at what you learn in the process.

TweetShare
If you enjoyed reading this post, please share it!
Freaked Out on the Other Side of the Aisle