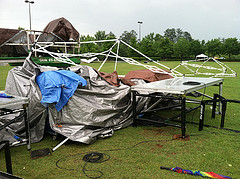 Back to the Lawn

We do an event almost every year called Concert on the Lawn where we bring in a stage, some lights, video, and a big ol’ PA out on our front lawn to put on a little concert. The music is a mix of current to classic hits from a variety of genre’s sometimes too close together to tell the difference such as pop, rock, classic rock, alternative, etc. It’s just a fun night for people to come out to hear some music they can feel good about inviting their friends and neighbors to. This year we’ll probably have around 4000 people out on the lawn for the night. 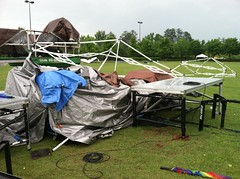 As some of you may recall, last year’s event was rained out and the subsequent power outage prevented us from moving everything inside at the last minute. We did reschedule it indoors later in the summer, but I ended up out of town and didn’t get to mix the night.

We’re set to take another stab at Concert on the Lawn this year on Friday, June 6, and hopefully it won’t get rained out again. I’m particularly excited about being a part of the concert this year because the PA will be L-Acoustics new box: K2. I’ve been a fan of K1 since it hit the market a few years ago, and K2 is essentially K1 with 12″ drivers instead of 15’s. I haven’t mixed on K2, yet, so this will be a fun first time out on the rig.

I’m trying to wrap up my pre-production work for the show by the end of the week so I’m ready for everything next week. The biggest challenge for me going into this is input and output count. The band isn’t necessarily large, but with these kind of events there are typically instruments here and there that will show up for a song or two. On top of that are a large number or rotating vocalists on and off-stage. So the challenge comes in on deciding where inputs and monitor mixes can be discrete and where things will rotate.

For example, the core band will all need discrete monitor mixes, however, vocalists who aren’t on stage the entire time will end up sharing mixes on the console. Through the power of modern day digital consoles they might get their own mix while they’re on stage, however, they might then need to relinquish their IEM receiver for another vocalist and those transactions need to be figured out ahead of time and managed during the show.

The same thing goes for vocal mics and similar instrument inputs. If three different guys play acoustics at different times, do I blow 3 inputs on 3 different acoustics or just use one line and snapshot them? If I have 10 vocalists, but a maximum of 4 of them sing at a given time, do I kill 10 inputs for vocalists or do I find a happy medium in between 10 and 4? And do I trust that everyone will get the right mic if I minimize things? Or if I go for all 10, can I even kill that many inputs because I have a feeling someone is going to bring a mandolin or fiddle or french horn I wasn’t originally informed about?

I have great communication with our music folks, but stuff comes up and sometimes it’s good for band morale to leave room for these “creative moments”. Happy bands generally play better and are mixed easier; that’s one reason why I will probably never go see the Eagles live in concert.

On top of all this, most of the gear we’ll be using is rented for the event. Since I haven’t finished all my pre-production work, I haven’t been able to make sure all of my specific requests will be met. I know what’s coming in terms of my major players like PA and consoles, but some of the nitty-gritty details like specific mics are still up in the air.

Once my pre-production work is done, I’ll need to figure out how much of my usual mics can be provided by the sound provider. Then I’ll need to decide whether I bring some of our mics into the fold or use whats available from the sound provider. For example, I’d probably be OK using an alternate small condenser on the cymbals, but I’m probably going to want the same vocal capsules I’m used to using with these vocalists.

Then there’s the console management side of things. Where do I put it all on the desk? Do I use snapshots to share processors across inputs? And what happens if the consoles arrive with less DSP than we were counting on? Will I be able to compromise on the fly? Should I just assume from the start I’ll be compromising and mix rehearsals within those limits?

These are all things rolling around in my head, but I don’t consider figuring these things out a drag. This is part of the fun of doing events like this. Of course, this part of the fun is almost up because next week we move into a day of rehearsals followed by a couple of days refining and rehearsing the mixes via virtual soundcheck. And somewhere in there I’m still going to prep all the normal Sunday stuff.

I’m sure I’ll have more to say about how next week goes in a future article, but for now I’m just really looking forward to it.