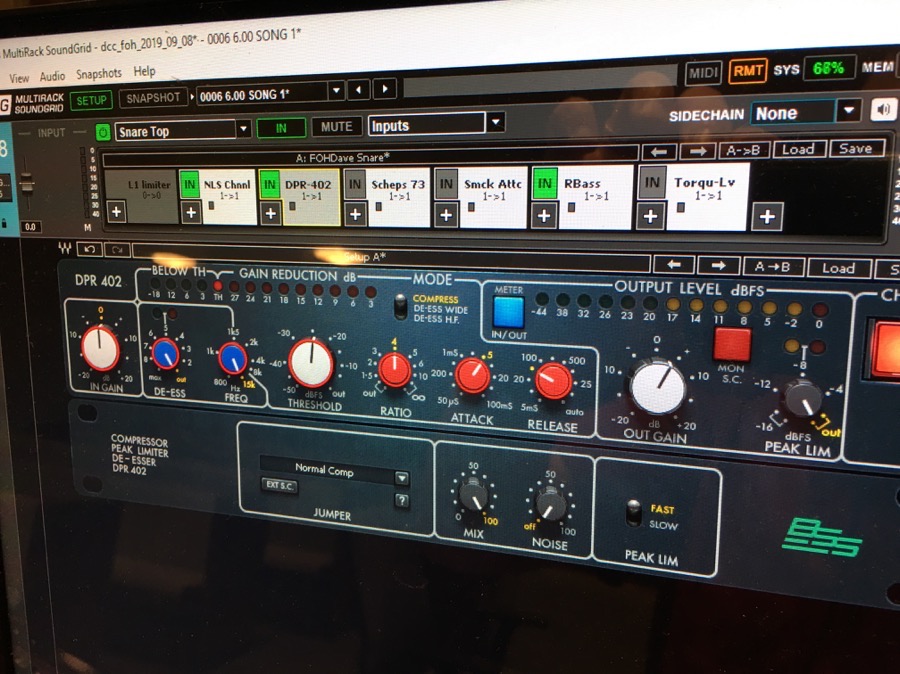 You Don’t Need Everything

Take a look at the photo here.

This was my rack for my snare channel from a recent mix, and as you can see there’s a LOT here. In fact, within Waves MultiRack you can use up to 8 plug-ins on a rack, and I have 7 plug-ins loaded in the rack. Right now some of you guys are probably shaking your heads while some of you are probably nodding and thinking Rock on!

If you look a little closer, though, you’ll notice that not everything is on. So what’s going on here?

First up, there’s a lot of stuff loaded in the rack because I work with a lot of different drummers. When I’m getting ready, I don’t know exactly what I’m going to need for a particular drummer, but I do have some favorites I like for doing different things. Setting them up to start saves me time when I actually get into soundcheck and rehearsals because I won’t need to go digging for things in a bunch of menus. I like to start with stuff off, though, because I only want to use the stuff I need. In most cases, I only end up using a few things.

On this particular day, I had a little bit of saturation from NLS at the top using the Mike setting, then I did a hair of compression with the DPB-402 to get a little more punch from the the drum, and I finished it off with a little bit of RBass because the drum was on the brighter side and I thought it needed a little more meat for the style of songs we were doing. So what about the other stuff in there?

I had a drummer at some point who was hitting rimshots that on occasion were a little inconsistent and peaky for me, and the L1 helped tame those. So I have the L1 ready for cases like that or for someone else who might be out of control at times. I didn’t need it for this week, though.

The Scheps 73 is there because I love its high shelf for brightening up a snare and bringing out the crack AFTER compression. Sometimes I like bumping the low band set at 220 as well. There’s also a thing you can do with this where you drive the input fader while bringing back the output fader that sounds cool sometimes. I didn’t need or want any of it this week, though.

Then there’s Smack Attack which comes in handy if I need to play around with the overall transient and impact of the drum, but all was good this week so it’s off. Finally, I have Torque in there which is a last resort for me if the snare is tuned too high. I know some guys really love this plug-in, but I rarely use it. In most cases I don’t want to mess with the pitch of the drum, and I have a few things I prefer to try if I want to fatten or thicken up a snare drum.

I think it’s really easy to get carried away with inserts when you’re mixing. A lot of older engineers will complain like it’s a new issue created by plug-ins, but overusing inserts has been around for as long as patchbays have existed. It’s just a lot easier and more convenient to patch a lot of stuff in the digital age with a tool like MultiRack.

No matter what kind of gear you’re using, though, it’s important to understand what everything is doing to a sound. There should be a reason why you have something turned on in the chain. It’s very easy to just start adding things over time and end up no longer helping things. For example, one week you add an EQ. The next week you add a compressor. Then you add a transient shaper. Then you add another EQ–maybe a dynamic one–and on and on until you’re two months in with a stack of stuff on the input that’s not sounding so hot anymore. You didn’t have any fear when you added that stuff so you shouldn’t have any fear in turning it all off because the odds are high that you don’t need everything.

One of the things I try and stress when I’m training is everything you do should be based off what you’re hearing. A big part of why I do training on site is so we can look at the sources people are dealing with on a regular basis to both demonstrate some things that can be done and to help people make choices on what to do. Sometimes we overhaul a lot of things, but there are also times when I help confirm choices and we just refine what is already working.

So are you sure what you’re doing is the best for the musicians in your bands? Is it time to take the audio in your church to the next level? If so, why not look at getting some training for you and your team? You can Contact me through my website or even schedule a time to chat right from my homepage.