The Misconception of “Everything” 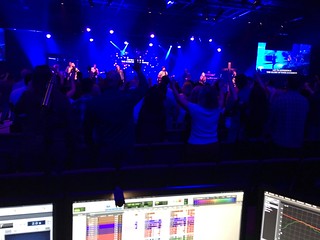 At a recent FOH gig, one of the pastors came up to me and said, “It sounds amazing when you are here. I can hear everything!” Receiving this kind of feedback is always gratifying for me, but I think there’s a bit of a misconception on what exactly “everything” means.

For many engineers, there’s this idea that if you turn the knobs and set the faders in just the right way, suddenly everything playing becomes instantly identifiable. This idea of “hearing everything” is one of the Holy Grails of mixing. There are definitely some techniques we can use that help with achieving something along these lines in terms of separation, but I think our mixing abilities here are often exaggerated.

In reality, hearing everything isn’t really possible with a dense musical production.

I know I’ve mentioned this before: Jack Joseph Puig has a plausible theory the brain can only hear three things at a time. While that may be the case, I believe our ability to actually focus on things may be even less. So we might hear three things, but our focus or attention is likely only on ONE of those things at any time.

Does that seem far-fetched?

Well, think about this: Have you ever been out with a group and been able to focus on multiple conversations happening at one time? You can probably hear them all going, but your primary focus was likely only on one conversation. This is probably a bit of an oversimplification in how our hearing works especially when it comes to music, but it’s not a stretch to say that our brains just aren’t good at focusing on multiple things at a time, and there’s plenty of research floating around dispelling the idea of multitasking.

So what does this have to do with hearing everything?

The idea of hearing everything in a mix is often more about hearing the right things at the right time than having the ability to literally pick out everything all at once. In other words, it’s a bit of a mix trick in and of itself.

Look, I’m not gonna lie. I love it when I can get the mix happening to the point where I know anybody can scan the stage and pick out anything they want to hear. That ability comes largely from arrangement as I mentioned in a recent article, and there are also some engineering techniques I often teach in my workshops related to this as well.

At the same time, though, I see myself failing as a mixer if someone is scanning the stage and listening to anything they want. Maybe that’s important for some genre’s and artists, but in the music I mix there is nearly always a strong focus or principle element driving the music at any given time.

So the principle technique I use and have relied on in every stage of my career is much more simple than console olympics. In fact, I believe the majority of my success in mixing stems from this simple method I started using long before I was any sort of EQ or compression ninja. This very basic technique I use is: Directing Attention. Basically, I highlight the important musical stuff and subdue the less important stuff with my mix decisions.

In the first song, the opening hook starts on piano with the last bit of the phrase on guitar so I pushed those instruments in the mix relative to their parts in the hook. In the verses I pulled the BV’s back letting the lead vocal take the forefront of the mix, and then pushed the BV’s back up in the choruses. The second song, Love So Great features a very simple guitar part in the verses so I nudged that up a bit. The third song, Holy Spirit was played by the band very simply at first with mostly light acoustic guitar and a keyboard pad with a wall of sustaining guitars entering when the full band came in. One of the standout parts of all this was the bass as he was playing very low on a 5-string giving the song fullness and weight so I made sure that was felt. The fourth song, Spirit of the Living God featured just about everything at some point with piano/keyboard stuff at the top and more guitars and vocals towards the back. Throughout the set the drums and vocals were always present as needed.

Now forget about the whole set for a minute and go back to that first song. Within that one song I highlighted pretty much everything on the stage at some point. It helped that the arrangement of the song leant itself to this, but my small, sometimes subtle, fader moves directed attention to each instrument’s part.

By featuring everything in a small manner as the music calls for it, the perception of a listener is they can hear everything because at some point they really did. Part of the key, though, is to constantly direct the listener’s attention. When a magician is making a coin disappear, he doesn’t wave the hand that’s actually holding the coin around. He constantly directs your attention where he wants you to look.

I’ve used this strategy at every stage of my career working on everything from large, top-of-the-line digital consoles to the days back when I only had a couple of 12 channel Behringer Eurodesks chained together. A bit of EQ and compression on things helps polish the overall mix, but it was these fundamental musical fader moves throughout the set that ensured everything was heard when it needed to be heard.

The beauty of this method is it’s very musical, and I believe engineers can get a hold of it much faster than the time it often takes to master things like EQ and compression. This is why discussing music and musical approaches are a large part of my mixing workshops and training sessions. I know the next couple of weeks are going to be busy for all of us as Easter approaches, but if you’re ready to go deeper and take your team’s audio to the next level, let’s chat after Easter.