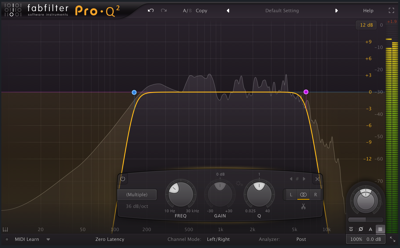 In this information age, I know a lot of us are always looking to get as much information as we can to become better engineers. I love getting “recipes” from other engineers just as much as anyone else. However, I’ve often found I prefer the results I get when I listen to something, consider what I think I’m hearing, and use that as a jumping off point. It doesn’t always matter exactly what someone is doing or exactly what someone is using. What matters is the result they get.

So how about an example.

I like to take different engineers I admire, throw a bunch of their work into a playlist, and listen for common things that stick out to me. Recently I’ve been going through a lot of Tom Lord-Alge’s mixes. TLA is the younger brother of Chris Lord-Alge, and I don’t think it is a secret that CLA has been a big influence on my mixes. So it was interesting for me to listen a little more in-depth to some of Tom’s work. While the two share some similar attributes in their mixes, there are definitely some differences.

One of the things I appreciate about TLA’s work is he has a wide range from more adult contemporary oriented stuff early in his career to modern rock in the 90’s up through today. You can check out some samples of his work at his management’s website.

So what are some things I took away from listening?

The biggest thing I noticed is how TLA treats the bass guitar, and it seemed like a bit of a signature for him. For starters, it is typically heavily compressed which is evident from how even it stays in level within the mix along with a sometimes droning sustain. It seems unless the bass player mutes the instrument, the bass fills out the low-end of the mix at all times.

TLA has never been shy about his love of compression and spanking things, and I’m fairly confident the bass guitar in most of his mixes gets hit pretty hard. While the amount of sustain leads me to believe he’s using a medium-ish or longer release time, I’d guess that the attack is maybe medium to slow-ish because the front end of each note is generally audible and important for getting the guitar to read in the mix.

Another thing that stood out to me about the bass is it doesn’t have a ton of mid-range information. It’s there, but the bass doesn’t seem to rely on this as much for clarity which is something I found interesting because I’ve often depended on making generous EQ moves in the mid-range to dig the note of the bass out. Since the bass guitar is getting it’s clarity primarily through low frequency information, I can make an educated guess there is a bit of filtering going on with the rest of the instrumentation to keep it out of the way of the bass which lead me to focus on the guitars.

As I started listening more closely to the guitars, I noticed they tend to be very strong in the mid-range. They don’t tend to be very bright or overly beefy. Throwing an EQ on the mixes helps reveal this a bit further, and also brings up a nice trick for evaluating things to learn.

I have a program on my laptop called Audio Hijack Pro. On the one hand it allows you to record your system audio or audio from a specific app, but what I use it most for is applying processing to what I’m hearing. When I’m listening to music to learn something, I will often thrown an EQ with a high- and low-pass filter on the mix using Audio Hijack Pro. Then I will play with those filters to adjust the bandwidth of what I’m hearing.

For example, I may start with a low-pass filter set around 30-40 Hz and begin raising the frequency. As the frequency rises, I’ll listen for when instrumentation starts becoming audible in a mix. In TLA’s mixes, most of the guitars I focused on typically started to really show themselves around 140-150 Hz. If I add a high-pass filter, I notice that it doesn’t seem to really affect much of the guitars until I get it down around 5-6 kHz. So right there that tells me that the bulk of the guitar bandwidth in his mixes is between 150 and 6000 kHz. I can easily apply this same approach to listen to the vocals or bass or keyboards by simply adjusting the filters while focusing on one of those instruments. As the instrument loses its character, that’s a sign of where the critical bandwidth for the instrument begins and ends.

Now the reality is, TLA may not be filtering guitars at all. He may be using a wide boost in the mid-range or maybe the guitars he gets handed to mix tend to just be this way to begin with. How he gets there doesn’t really matter to me, though, because I know when I’m mixing the audience doesn’t really care how I achieve the mix. They only care that it’s a good mix so in the end all that really matters is how the mix sounds and feels. However, by listening to music in order to learn, I can walk away with a bunch of ideas to try when I’m sitting behind the console. Just from the examples above I could try:

I may try these things and love them, or I might not like how they affect something else in my mixes. The point of the exercise wasn’t for me to figure out THE way to do things. The point was to get some ideas for different ways to approach things.

One of the hardest things about teaching mixing is there is rarely one way or approach to doing things. For example, I just had someone point out to me that a lot of pop vocals these days don’t have a lot of low-frequency information. I can see how that would work in the context of a mix, however, I probably wouldn’t do that to a live vocal because I don’t want my live vocals to sound thin when they start talking in between songs without the rest of the mix to fill things out. If I’m mixing a pop-track in my studio, however, this might be an approach I’d use.

So what’s the takeaway from all this? Grab some records you love or respect and listen to what’s going on, but don’t think you need to be an expert engineer to do this. Just jot down your impressions. Are the guitars bright or beefy or both? Do you hear reverb? Is it dark reverb or bright reverb? Do you hear delay? What are the volume relationships between instruments? Then the next time you’re mixing, try some things out. Find out what you like. Find out what works for you. Have some fun.

So what kinds of things have you been learning from the music you listen to? Let me know in the comments.