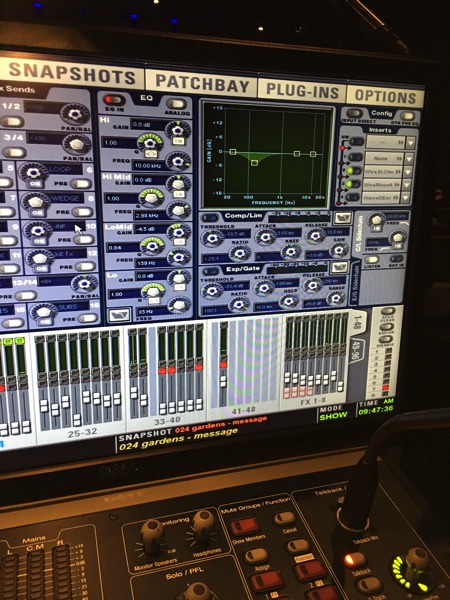 Well, this took a lot longer to get around to than I’d hoped, but the kids are finally back in school so let’s do this.

I’ve seen a growing number of church’s doing the isolated guitar amp thing. I’m not against this, and I’ve endorsed it and talked about using it in the past. However, as I traveled to other churches over the last year and a half, I started wondering how much it’s really helping.

I think guitars should be pretty simple to handle in a mix. If you’ve got good tone at the amp and a good mic in the right position, I don’t think there should be much else to do after pushing the fader up outside of maybe a touch of EQ to clean it up and make it play nice with the band. Yet, I feel like for I’ve been working harder than I should to get good guitar tones. Even when I’ve been working with amazing guitarists, there have been many times where it just never seemed as easy as it should be.

Through my travels, one thing that stood out to me is the churches I was visiting that didn’t use smaller isolation boxes typically had better sounding guitar amps at the console and through the PA EVEN when the tone at the amp wasn’t quite as good as some of the players I’ve had the privilege of working with through the years. Sometimes the amps were just sitting off on the side of the stage, sometimes they were in a large room backstage, and sometimes they were even just sitting out on stage like we used to do. In all of these situations, they tended to sound better and be easier to work with in the mix.

So I’m revisiting the whole concept of amplifier isolation boxes.

On the one hand, moving amplifiers off-stage makes for a quieter stage and more controllable mix for the audience. Tube based guitar amps, in particular, benefit tonally from hard driving so moving them off-stage allows the amps to run closer to their optimal volume and tonal sweet spot without cooking the audience and/or musicians on stage.

One modern solution to get the amps loud and off stage often involves placing them in some sort of constructed isolation box. While it may be relatively easy to get a few Radial SGI’s and a space for those amps, what isn’t easy is getting the acoustics of that box right. In fact, the more I use these, the more I wonder if they can ever be completely right.

Well, I think it’s because of our friend Phase once again coming to visit.

Just because we have a microphone slammed right against the grille of our favorite amplifier doesn’t mean the acoustics of the space it’s in aren’t coming into play. What I find is, the smaller the space, the harder it gets.

Think about it. Our amplifier is maybe a foot or two away from a hard surface in these boxes. The sound exits the amplifier, pounds the wall, and then reflects back. That short distance doesn’t give the sound a lot of time to lose energy so now we have sound reflecting back to our amplifier(and microphone) that is out of time/phase and/or polarity to some degree resulting in some kind of combination.

To deal with this, acoustic foam is often used to line the inside of the isolation space, but the problem with foam is it’s worthless at dealing with low frequencies. Switching to better acoustic material such as a rigid fiberglass like Owens Corning 703 still won’t provide adequate absorption for dealing with lower frequencies because you need a boatload of it. And before you think guitars have limited low frequency content, remember that the low E on a guitar has a fundamental at 80 Hz.

So I’ve been doing some experimenting at one of my regular FOH gigs asking guitarists to keep their amps out of the isolation boxes. The first time I tried this, I mic’ed the amp with a standard SM57 and a spare 421 that was lying around. When I pushed up the faders, I was very happy with what I heard as I was 95% there. You can see the final EQ I had on each mic below: 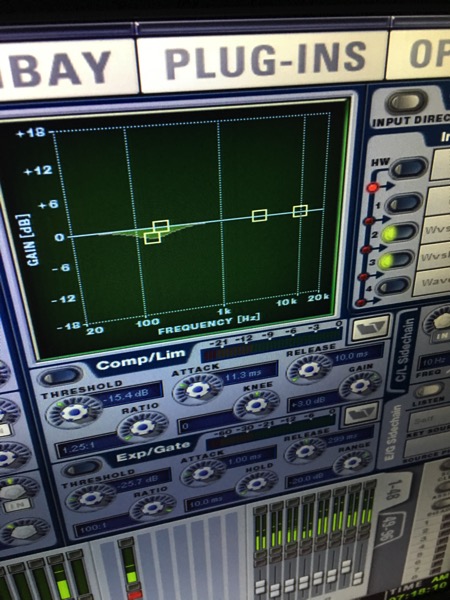 I should note there was a high-pass filter around 100 Hz in use on each of these mics courtesy of the Waves SSL channel plug-in, however, that’s all I used on those plug-ins.

Two things immediately struck me on that initial time out of the box. First, I used very little EQ. There was a bit of a resonance around 160Hz, and a few dB of EQ on each mic knocked it right out. Second, the frequency I was EQ’ing was very different from where I normally address things at this particular gig. It’s very typical for me to have to do something in the 4-500 Hz range and sometimes the 2-250 Hz range as well when using their ISO boxes. Then there’s often some stuff I end up doing in the upper-mids. Oh, and let’s not forget the C6 I almost always end up using on the channel. On this particular week, I had that one EQ move, and then I added some compression from Renaissance Axx to bring some of the more dynamic playing out. Pretty simple. Pretty easy.

As I experimented more over the Christmas season, I was able to get a couple recordings of the difference between the ISO box and no ISO box, and a sample from each of those is below. These were recorded over a couple of rehearsals with the amp in the ISO box for one rehearsal and outside it for another. What you are hearing is direct after the mic pre.

Outside the ISO Box [audio:/ISOBox/gtr-no_ISO.mp3]

I like these examples because the guitar player was a younger guy still chasing the ultimate tone. I know I could make both of these work, however, the amplifier outside the ISO box has a lot more clarity to me. The ISO box version is muddier, and the transients don’t cut the same. Some of this could have been playing style and knowledge of the song from one rehearsal to another. The player also noted to me that it was the best his guitar had ever sounded in his ears which would also influenced his playing, and the results. However, as I’ve experimented with this more and more I’m finding this assessment to be fairly consistent on this particular ISO box which is about a 4’x 4′ box with rigid fiberglass on every surface but the floor. Different size boxes with varying amounts of treatment will likely yield different results so your mileage and experiences will also likely vary.

So where am I at with guitar ISO boxes right now?

I currently view ISO boxes much in the same was as drum shields. There can be definite benefits to them such as having a quieter stage, but there may also be compromises in terms of sound quality that go with them. Ultimately, you’ll have to weigh the pro’s and con’s for yourself.

Personally, if I was starting from scratch at a new church or in a new facility, I would avoid a hard ISO box if possible, and I’d even be open to experimenting with putting the amps back on stage. One of the clients I’ve been working with regularly has had great success keeping their amps on stage, however, I’ll also add that their players are very bought-in to keeping volume under control and creating something for the room.

One thing I would really like to experiment with is building a frame to drape acoustic or moving blankets around an amplifier. My thinking is this could dampen the upper-mids in the space while avoiding hard, reflective surfaces that might be causing trouble in an ISO box.

There are also a lot more solutions for guitar volume available these days that remove amps from the equation, and I would love to experiment more with these as well. For example, amp modeling continues to move forward, and I would like to work more with Kemper Profiler and the latest from Axe-FX and Line 6. I’d also like to try some of the DI Box type solutions like the Palmer PDI or the newer Radial JDX Direct-Drive.

If you’ve been working with any alternative solutions to guitar volume involving or not-involving ISO boxes, I’d love to hear about it in the comments.

3 Responses to “State of the Mix 2017 – Revisiting Isolation”