Today I want to show you something I thought some of you might find interesting. A lot of people–myself included–like to point at the view of a waveform when referencing the dynamics of audio. I’ve found having a clear visual can be very helpful for engineers in understanding what they’re hearing. However, what you see isn’t always exactly what you hear, and you have to be careful not to misinterpret what you are seeing.

Take a look at the two waveforms below.

Based on what you can see above, which one do you think appears to be more dynamic? I’ll wait while you give it some thought.

The problem, though, is these waveforms are views of the exact same audio. The top waveform is being viewed in Peak mode while the bottom is a view in Power mode.

So what does this mean?

The Peak view is a truer representation of the actual waveform of the sound. This is the most common view you see of a waveform in a DAW. However, our hearing is not as sensitive to peaks. Our hearing favors things over time. That’s where I feel the Power view–provided here via Pro Tools–comes in as it is a better representation of our actual perception of dynamics.

Let’s look at the after now.

The two waveforms above are once again views of the exact same audio. The top is in Peak mode while the bottom is in Power mode. These are waveforms of the audio from the original example after processing. Without knowing that and based on what I’m seeing, I would once again assume the top waveform is more dynamic. However, since the audio is exactly the same, so are the actual dynamics.

First, we need to be careful to judge what we see. I like using waveforms as a teaching tool, and they can also be helpful in explaining what is being heard. However, I don’t use them to make initial judgements.

The other thing I wanted to show you that’s maybe more interesting is the visual difference compression can make on something. So let’s look at at the Before & After’s. 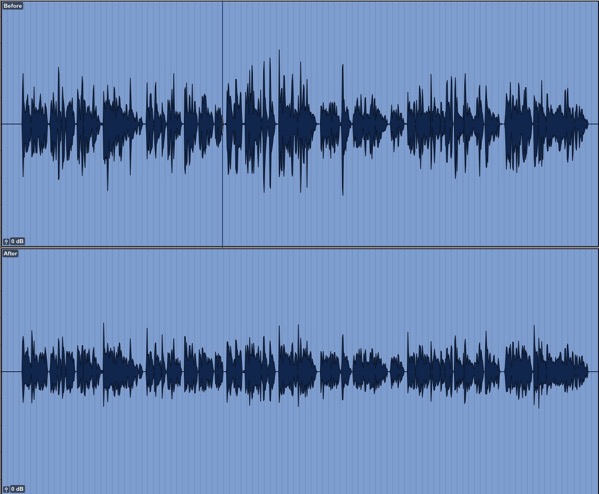 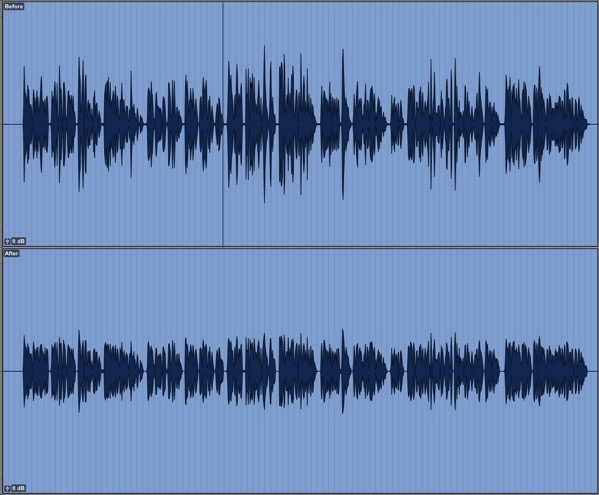 The photos of waveforms above are the same ones we’ve been looking at this entire time. I’m just grouping them together now in Peak views and Power views. You can see the result of compressing the audio in both of these. The After waveform in each case appears more consistent than the Before waveforms. I would expect this as it was one of the goals in processing the audio.

There are various reasons to employ compression, but I wasn’t going for anything fancy here. This was meat and potatoes compression as I was simply trying to make things more consistent in perceived loudness. I think the Power view does the best in showing this.

If you look at the Before, you can see how the waveform rises and falls quite a bit over the course of the audio. Since we’re looking at Power, we’re basically looking at the loudness rising and falling, and this is often happening within phrases with some things peaking out. This particular audio was of a voiceover, but I would approach a vocal in largely the same way. In this case, I wanted to make sure every word being spoken would be heard clearly, and that words wouldn’t be jumping out where I didn’t think they should. In the case of a vocal, I would be trying to make sure the average loudness of the vocal was consistent with the rest of the band so that every lyric can be heard and the vocal feels like it’s part of the the band.

In the After, you can see how much more consistent that loudness has become thanks to compression. The audio isn’t brick-walled, though. You can see it still has some movement in loudness over time because I didn’t want to take all of that out. However, the overall level is much more consistent so every word can be heard clearly, and things aren’t poking out now. If you look at the Peak view, you can see the transients that appear as spikes are still there because I didn’t want to take the life out of things.

Sorry I don’t have audio for you to hear of this. I’ll try for that next time. I just thought this might be interesting to some of you to see. I’m on a bit of a compression kick right now so if you have a question about compression, basic or advanced, let me know in the comments.