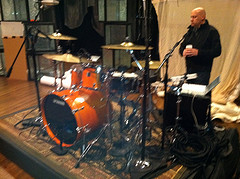 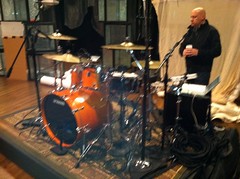 I started experimenting a bit with our drums again. Chris Briley had been trying to convince me to ditch our drum shield for a few months and was mixing an event in one of our rooms a few weeks ago with the shield off so I took the opportunity to walk around a bit during rehearsal to listen to what was happening in the room. What I was hearing got me a bit curious about trying it out myself.

So a little quick background on my use of drum shields; I essentially have two main reasons for employing them. The primary reason is to keep the drums from killing the first few rows of seating. The second reason is to clean up the vocal mics on stage from cymbal bleed.

But here’s the thing about the first point. My friend Vance and I have a theory that goes something like this: Most people who sit in the front rows are there for a reason. They don’t mind getting their hair parted and, in fact, some of them are even looking for that. If you’re sitting in the front row at our services on a regular basis, you’re already getting some extra thump from the subs along with maybe 2 or 3 dB of overall loudness. I don’t necessarily think these are bad things because it’s not an uncomfortable bump, and I think in a way it meets the expectations of front row seekers. The other side of our theory, of course, is that people who are looking for a quieter experience will instinctively sit further away from the stage. So I guess my bottom-line is maybe our effort to save the front row from the drums isn’t quite as necessary as I sometimes think it is.

The second point, however, does remain a real issue. While I don’t mind the actual drums bleeding into vocal mics so much, cymbals can be rough. Add to the fact that we have a lot of guys on the cymbal bashing bandwagon, and it really can be an issue. However, as I sat and watched the Grammy’s last month I was reminded of how many professional acts avoid using a drum shield and still get good results.

So after mulling everything over, I figured I’d try striking the drum shield to see what happens. I pulled the shield off for our Night of Worship a few weeks ago, and it has been off ever since. Although, my feelings are still a little mixed on the whole thing.

On the one hand, the drums do sound better. It’s hard to explain exactly what it is that makes them better, but they do sound better and maybe even more natural. One of the big downsides to a drum shield is the energy the shield is stopping has to go somewhere, and that somewhere is often a lot of bouncing around within the shield. These reflections can then cause destructive interference (comb-filtering) at the mics that can create some weirdness. These reflections can also actually cause issues on stage and out in the house depending on what’s directly behind the drums. Without the shield the drums sound like…well, drums. Go figure.

On the other hand, I’m still not sure about the vocal mics. There can definitely be a fair amount of cymbal bleed at times without the shield. The hard thing is that I’m often trying to bump up some air on the vocals, however, that also has a tendency to bring out the cymbal bleed a bit so I’ve found myself compromising a bit here which isn’t the end of the world. I’m also finding myself riding some of the vocal mics a lot more than usual pulling them out when nobody’s singing. We probably average 3 open vocal mics at a time which seems pretty manageable bleed-wise, but I can definitely see how there could be issues with a bigger vocal number knowing that all that bleed is only going to add up.

On the non-audio side, comments have been favorable. No shield definitely looks better on stage and on video than A shield. I also appreciate that it’s much easier to get at all the drum mics to tweak positioning. Plus I feel strangely validated as a FOH engineer mixing without a shield; it’s been a very long time since I’ve done it, and it was nice to know I can still make it work.

At this point in time I think the shield is going to remain off. Of course like all things I’m sure I’ll circle back at some point for one reason or another….