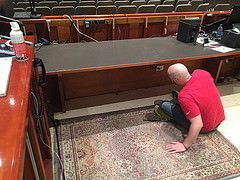 Earlier this year we solved something that has bugged me for the last 8+ years: our console height.

First a little backstory: Our mix position is in a pretty good position in the room. We’re fairly close to center about 2/3’s of the way back in the room. It’s back far enough to avoid the acoustic goofiness that can happen in the dead center of the room and far enough forward of the balcony so it doesn’t affect FOH. In a perfect world I would be a little closer to the center of the room from left-to-right, but where we’re at is good.

The downside to the position, though, is there is seating directly behind us, and since the floor of our room is completely flat we have to consider those seats behind us as much as possible when placing gear at FOH. One of the challenges the seating creates lies in getting the console high enough so operation is comfortable to stand while keeping it low enough to minimize our effect on sight lines. On a typical Sunday you can’t help but mix in both positions since everyone stands up for music and sits down for everything else.

The compromise we used for several years put the console a bit low when you’re standing and a bit high when you’re sitting. The position of the console was working, but it was just never as good as it could get. Let’s just be real. I’ve never had the best posture, and being hunched over the console every week hasn’t been doing me or anyone else any favors. 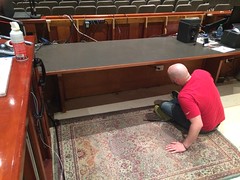 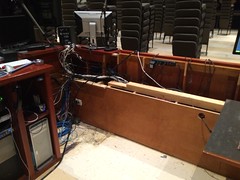 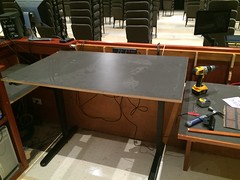 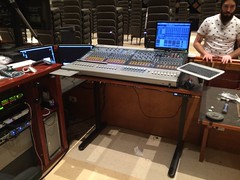 A few months ago, Josh, one of our Production Associates, and Seth, our Production Director, modified our FOH furniture so now we have the best of both worlds for seated and standing service programming. The solution was to install a Jarvis Sit-Stand desk for our FOH console. The desk is motorized and can move between about 26″ and 51″ high. It can lift up to 350 lbs. which is more than enough power to raise and lower our FOH console along with a few accessories.

I’ve been wanting to put our console on a desk that can adjust its height for several years now, but I was holding out in the hope we would eventually completely remodel our furniture and make it fit better. However, since the Jarvis is available as a frame without a top this seemed like a great solution.

On a late Monday afternoon, Josh and Seth cut out a portion of our existing furniture to make room for the new frame. We then assembled the Jarvis frame and reattached the original piece to the new frame the next morning. In total the entire project took less than a day for them to complete.

The controller for the desk’s height features up and down controls along with 4 memory locations. Since the desktop still sits within the existing furniture, part of the structure limits the travel of the desk so I programmed locations for minimum and maximum height which also handily serve as near perfect heights for me when I’m sitting and standing. I also programmed an additional memory slot for the maximum height of my ErgoLab Stealth Touring chair.

I’ll admit it. Having a console that automatically goes up and down definitely looks cool and is cool to have. However, I can’t express how priceless of an upgrade this has been for me. Ergonomics is one of those things that, unfortunately, often gets neglected, yet really does impact things. The last few months working on the “new” console have felt great. It just feels so natural having things at a comfortable height at all times. It may sound cheeseball, but I feel like I’m also connecting with our music again in ways I hadn’t realized I’d drifted away from.

A lot of us are very deliberate in where we place channels on the console to make things as natural and intuitive as possible, and I think this same philosophy can be extended to our entire mixing environment. If your console or any part of your overall mixing setup isn’t ergonomic, I highly highly recommend you look at moving things so you can work comfortably. A natural setup makes things easier to get at allowing an engineer to focus more on how things actually sound. At the end of the day, isn’t that something worth working towards?