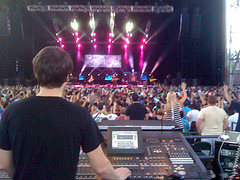 Revisiting Fundamentals In The Shed and Getting Dirt-y 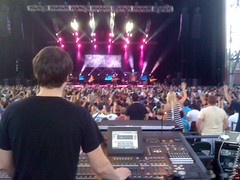 We had the privilege last week to crash the Hillsong United show in Atlanta at the Verizon Wireless Amphitheater and hang out with the crew. I was bummed that the PA was already in the air and dialed in by the time we arrived, but it gave us some time in the afternoon to talk shop and listen to some reference stuff through the PA. And the PA sounded amazing. It was a D&B J series rig: J12’s for the main arrays with 2 sets of B2 subs in cardioid configuration(1 set = 3 B2 subs) per side and then a bunch of J-subs up in the air. Given the laws of physics, the low end was good. The tops were also very smooth with pretty consistent coverage throughout. I love that PA which was a scaled up version of what we had in our room for the Thirsty Conference a couple years ago. There are some great PA’s out there, but this is still the best thing I’ve heard for my personal tastes, dreams, and desires.

FOH console was a Yamaha PM5D, and FOH engineer James Rudder had a few cool things in his rack like a Distressor for vocals and a Fatso Jr. for fattening up some drums and then there was a Smart C2 doing a little bit of compression on the master bus. But beyond that everything was being done in the console. It was fundamental mixing and sounded great from where I was sitting/standing(see inserted photo….); I also got to walk around during soundcheck, and if it was my room I would have been pretty satisfied with the consistency of the coverage.

Now I don’t think it’s any secret that I have personal leanings toward certain pieces of gear, but last week I got to stand over the shoulder of a guy using some stuff that I wouldn’t necessarily have pulled out of the sound company’s shop and it sounded great. Why? Because it was a talented band with a talented FOH engineer and a talented system tech. Yes, they were using really good gear, but I got the impression that these guys could have still pulled off a great show with less than they had.

So this got me thinking about a sort of broad topic that was already floating around in my head a bit. Part of it is because we just installed another digital console and have a new set of volunteers that need to get up to speed on it. Part of it relates to what I’m going to present at Dirt Conference in November–more on that later. And then it sort of even ties in a bit with a recent post Tim Corder had on organic mixing.

I guess, for me, the heart of mixing really consists of some fundamental things. At the basic level it’s EQ and level balancing and the ongoing manipulation of those levels to deliver a song or a sketch or a speech or whatever. Consoles are consoles and mics are mics and EQs are EQs and on and on and on. There’s a variety to pick from in an assortment of different qualities, colors, and flavors. But fundamentally one mic does the same thing as another mic. One parametric EQ does the same thing as another parametric EQ. For some of my fellow audio snobs out there, this might be a gross simplification, but I’ve worked on junkie little mixers along with the stuff the big chair guys use and when I apply EQ, I apply EQ for the same reasons no matter how high- or low-end the gear. It’s the same fundamental concept every time. Sure the results are going to be different based on the quality, color, and flavor of a particular EQ, but I’m really trying to do the same thing with it. I mean, in almost 20 years now of some sort of involvement with sound from an amateur level to full-time professional, I can’t remember coming across a console where a fader did something different than what a fader does on every other console I’ve seen, and the same can be said for just about all the other knobs on all the other general types of gear you come across in audio-world. At the end of the day, the fundamentals rule.

So something that I’m excited about is this November I’m going to get to present at Dirt Conference at New Life Church. I haven’t generally done these types of things because it’s hard to find the time outside of my family and my team at North Point. But the heart of the Dirt conference gets me very excited, and I’m very happy to say that we worked it all out so I can be a part of it.

Something that concerns me is sometimes when folks visit my church, they ooooh and ahhhhh at the flashy lights and shiny gear and then go home discouraged because they feel like they need all the big ticket gear to make an impact in their community on Sunday. Dirt is gonna be all about making things great with what you’ve got which speaks to my heart because for years and years I didn’t have the fancy FOH consoles and the big ticket wireless mics. Workaround was my actual job description because that’s what we did, and that doesn’t ever go away even when you have the big-fancy-expensive-drool-inducing gear. It took me a long time to really understand how not having all the cool stuff actually helped me and probably continues to help me to this day as we struggle with some of our existing systems in place. As I said, the workarounds never go away.

I’m hoping that at Dirt we can strip away the surface-y flash of gear and get back to being excited about the fundamentals of mixing because then we can get back to being excited about why most of us probably got into this audio stuff in the first place: To make a great sound. And these days I’m feeling pretty fired up about making a great sound. I don’t know about anybody else, but it was never the gear that lured me into this line of work. It was always the end result. The gear lust distractions came later.

I’m sure I’ll have more to say on these things at some point in the future maybe even as November approaches, but I’ll leave it at that tonight.

TweetShare
If you enjoyed reading this post, please share it!
Revisiting Fundamentals In The Shed and Getting Dirt-y