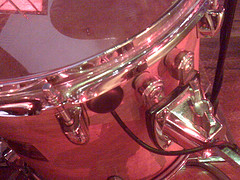 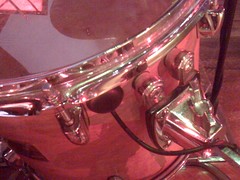 Last week I tried something new that I’ve been wanting to try for a couple years. I have sort of a love/hate relationship with gates on toms. Without the gates there’s just way too much cymbal bleed at times. But with the gates I find it quite challenging to get a true tom sound as in what you hear when you bang it behind the kit. It’s hard to get the tom attack right and it’s hard to get dynamic playing right, and it seems like every time I get one side right the other side suffers. Without frequency sensitive gates, you can get the attack to cut, but the threshold ends up generally high to keep the snare from triggering the gate. Countering that generally means using something frequency sensitive, but then you have to key off the body of the drum instead of the attack which makes it hard to get the gates open in time. It’s a sea of compromises, and I’ve been looking for something to try that I could set up quickly that would help with the response of the gates.

The inspiration for this new experiment came from Big Mick Hughes (Metallica, Led Zeppelin reunion) and Robert Scovill (Petty, Rush, Matchbox 20). Basically, the idea is to use drum triggers on the toms to act as a key for the gates. The theory is that the trigger will only react to contact with the drum so that the gates will only react to the actual drum being played. This way all the noise floating around the kit from cymbals and other drums won’t create false gate triggers creating the potential to drop the threshold on the gates so that they respond to much more dynamic playing. That’s the theory anyway. I wasn’t able to try this before because we were channel limited, but now that we’ve expanded our FOH consoles a bit there’s some room to play around.

Now, I honestly have to say I was a little disappointed in the results of my experiment. It’s probably from me expecting more from this technique than I was realistically going to get. What I realized is what I’m after is probably better achieved through drum and mic selection, and my current combination might always leave me wanting. However, I do plan to continue using this when able because there were definitely some benefits. At the end of the day, though, this is more of a luxury technique that might be a great benefit in some situations for some engineers, but wasn’t the Holy Grail for toms I was hoping for in my present situation.

In the photo, you can see the triggers we picked up and where they were placed on the drums. These are basic Pintech drum triggers. The wire from the trigger ends in a 1/4″ jack we connected with one of the included instrument cables to an old passive DI we had on hand that we ran into a channel on the console to bump up the level. On the Venue side I just set the sidechain of the tom gates to the channels for the triggers. At monitor world we’ll use a direct out on each channel to feed directly into the sidechain input of the gate, but we were short on adapters to make it happen last week.

In practice with these particular triggers, one thing I found is that they didn’t isolate as much as I had hoped they would. Maybe it’s a matter of the way our toms are mounted or placement on the drum, but listening to the triggers and examining the waveforms both revealed that there was definitely bleed in the triggers from the rest of the kit, although it was definitely way down from what a microphone picks up. I expected the toms to resonate a bit from the noise around them, but these were definitive “hits” that were audible from listening. I have a feeling that mounting the triggers directly to the heads might have decreased their sensitivity a bit to outside sounds, but I went for shell mounts because I wanted minimal impact on the tone of the drum.

Of course, the proof is in the pudding for this sort of thing so here are some audio samples I used to demo this for our FOH volunteers at a training session we did last week. I’d recommend using something other than your laptop speakers to listen to these, though.

These first two samples are a clean mix of the drum kit: close mics and overheads. I just muted everything but the kit. Sample 1 uses our gates configured traditionally using the channel as the key; this is where we probably would have landed sans triggers. Sample 2 is the same section of the song using the triggers to key the gates on the toms.

So the biggest thing I notice in these samples is that the attack on the toms when triggered is sharper. Of course these are naked drums so here are the same samples within the context of the full board mix.

So in full mix, in my opinion, the triggered gates read a little better against the band thanks to the increased attack gained from using the triggers. However, the first sample would have been satisfactory. This is one of those places where we do it because we can.

The next samples are a little different and display the other side of the trigger benefits: dynamics. This is a section of a build-up in one of our songs from last week.

Notice in the traditional gate sample it sounds like the snare is on its own for the first few beats, however the triggered sample reveals that the floor tom was played for the entire build. The samples below put it in context.

Listening in context, is there really that much gained, though? Hard to say, in my opinion. I guess if that floor tom is in the sub it might be felt much more through the whole build if the gates are open for every beat. But that’s probably not everybody’s cup of tea.

I will say again that I do plan to continue using the triggers for a while. Song choices and drummers’ playing styles haven’t been given a lot of consideration at this point so we’ll see where they land. However, at this point I wouldn’t recommend that everyone jump on the bandwagon of this this technique. If you’ve got a drummer with some extra triggers laying around it might be worth playing with because your mileage may vary. I will try and update on this in a few months after I’ve tried it on some different guys and some different songs.

8 Responses to “Open the Gate”