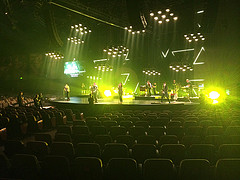 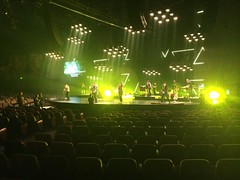 So here’s a way to think about the size of things in a mix: think visually.

Let’s start with cartoons. Have you ever seen a cartoon where someone got hit with a shrink ray? When he became small, what did he sound like when he talked? Thin and higher pitched, right?

Now think about a giant. What was his voice like? It was probably pretty full and deep and lower in pitch. When he walked what did his footsteps sound like? Were they little clicks or were they deep, low thuds?

Big things in a mix generally occupy large portions of the frequency spectrum with prominent low frequency information. Think about it. When you think of a big snare drum, is it all crack or does it have some meat in the lower register? Are big guitars brittle sounding or are they thick and rich and hit you in the chest?

Where people seem to get confused on size is when dealing with a lot of instruments. In these cases, the individual instruments can’t typically be as big as we sometimes want them to be. This is because in a crowded mix, each instrument needs to own its own particular portion of the frequency spectrum which reduces the size of that thing. If a picture has a frame or border, the frequency limits of our hearing perception are our equivalent. You can still have a “big” sounding mix with a lot of things in it, but the perception of all those individual things might not be so big.

Think of it this way: If you take a photo of 3 people, you can make those three people fairly large in the frame. However, if you want to take a photo of 10 or 15 or more people you have to move the camera backwards to fit everybody in, and as you move the camera back the size of each individual person within the frame gets smaller. If we have a larger friend we then want to add into the picture, either someone has to leave the frame, everyone else needs to squish together more, or we’ll have to pull the camera back even more making all the other people smaller still.

The same is true of the mix. If we want big things in the mix, other things need to be smaller. For example, it is quite difficult to have big drums and big guitars in a mix. Big guitars or big keyboards is another trade-off.

So some quick takeaways.

– Adding a lot of things into a mix means everything needs to get smaller to fit it all in.

– Adding something big to a crowded mix means other things need to get smaller or even eliminated in order to fit the big thing in.

One Response to “QuickTip: Visualizing Size”