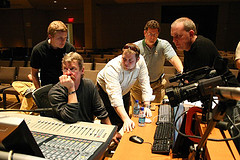 Mr. Jones and us 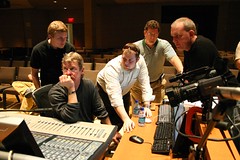 I had the unique privilege of spending most of today at a mix seminar with Buford Jones. If you’re not familiar with him, that’s OK because I honestly wasn’t until I heard about the mix seminar. However, he’s a good guy to know about because he’s basically mixed everybody–seriously–and he sort of played a big part in pioneering some stuff in sound reinforcement such as mixing in stereo. You can click on the link to check out his bio and get a look at some of the artists he has worked with.

He was a very nice guy with some pretty cool stories and experiences to share. While the majority of the time was spent with him presenting a lot of his own history and background, I did manage to take some notes on some things. Some of it was reiteration of things I’ve heard from other engineers and some of it was new. Here are some of the notes I took, my comments are in “[]”:

– There are two types of mixing, musical and technical. Technical mixing is where you’re focusing more on the technical side of things i.e., there’s two much 200 Hz in the room or that snare drum needs a little more 5k. Musical mixing is more along the lines of learning the song and becoming an extra member of the band. It’s anticipating solos and understanding what’s happening underneath the solos. Musical mixing is really about making the whole thing gel. When showtime(or the start of the service in our case) hits, you should be focusing on musical mixing and not technical mixing.

[It has been my philosophy in regards to this that the front end of rehearsal is for technical mixing, but hopefully during the back half of rehearsal and definitely during the service, the engineer should be in musical mode. If you’ve had rehearsals and haven’t gotten the vocal EQ right, the time is up and you need to run with what you’ve got unless it’s just a terrible terrible mess. There comes a time when you have to stop endlessly tweaking and live with what you’ve got. – Dave]

– The mix should be the result of collective input. This could include the artist, the artist’s staff, and the audience. Buford likes to poll the audience because they’re the ones he’s mixing for. He takes a lot of satisfaction in positive feedback from audience members as they’re leaving the show. He also looks for responses from the audience during the show he’s mixing.

[I watch the audience a lot when I’m mixing. You can tell when they’re engaging or not, and over time you get a feel for whether that’s because of the mix or not. I am a big proponent of keeping your eyes on the band (I actually get into a flow sometimes checking the band, IMAG, and the console) while mixing and luckily for me the audience has been conveniently placed directly in my line of sight of the band. I’m going to talk more about all this in a future post.- Dave]

– Buford prefers sound systems tuned linearly, and I say AMEN to that!!. When tuning, phase alignment and coverage should be the first priority. Tune sparingly when using EQ, and it should be parametric EQ and not graphic EQ. You should make board tapes and use the recordings to improve your mix.

[I always thought that this was a good idea, and Clark ProMedia showed me that it really works; we tried to do it with an RTA at my last church before we swapped out the PA, but you really need an FFT analyzer. I don’t know that linear tuning is the “right” way, but it’s my preferred way to have my systems tuned. Basically what you’re doing with the PA is tuning it so that what comes out of the console gets reproduced by the system with a minimum of coloration from the system. One big advantage to doing this is you can make your board tapes and replay them on other “flat” systems to hear what you’re doing. I record every rehearsal at North Point and play them in my car. When I was in Chicago I used to record rehearsals and play them back through the PA to hear what was happening when I wasn’t in the throws of mixing. These tapes were invaluable for me.- Dave]

– The volume should surround and engulf the audience, but they shouldn’t be worn out. Again, watch them for this. You want power and not pain in your mix. You need to figure out a comfortable range for your material, don’t worry about specific dB. Get outside opinions on whether it’s too loud.

[Chris Briley has said he can peel your hair back at 90 dBA or he can give you a great comfortable mix at 100 dBA. Too many church guys get hung up on sound levels, and this is probably the #1 question I get asked by visiting churches. I keep an eye on it, and use it for my own reference points, but ultimately it’s all about how it feels in the room for a given song and given band. I have found that if I can get everything balanced well, I can turn things up a lot. Case in point: my parents were down visiting over the weekend and they have traditionally not been fans of the loud live music, however my mother didn’t think it was too loud even though I was in the upper 90’s on an A scale. My point isn’t that you can go pretty loud and make people in their late 50’s/early 60’s happy. My point is to stop relying solely on dB meters and to use your ears and the ears of your congregation to find a happy place. And besides, the BAND is going to play a huge part in the mix quality; a great band mixed well sounds great at loud volumes, but a mediocre band mixed well sounds mediocre at any volume- Dave]

– Document everything. Having documentation around is going to be invaluable if anyone ever needs to fill your shoes because you are sick or moved or took another gig, etc. Buford keeps detailed notes on songs such as when the solos are, who’s singing what, etc. He also keeps a diary of shows [I’m going to start], where he talks about what worked and what didn’t and ideas for fixing things.

– The show is a time for intense concentration on the mix so be quiet at FOH.

[In my time working in church world, I have always found this to be difficult because there tend to be a lot of people around the board. The only way to get it quiet is to take the initiative and ask people to stop talking to you and keep it down.- Dave]

One last thing that wasn’t in my notes, but I’m going to mention is Buford talked both in his talk and offline about walking over to an artist and listening to them. Listen to your singers without the PA. Listen to the drums, listen to the guitar amps. I walk up on stage a lot during rehearsal to listen to drums and double check mic placement; our drummers all use their own snares and let’s just say that every once in a while someone brings in a snare that I need to check out in person….