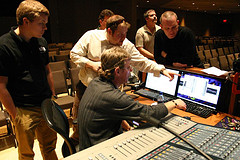 Tips from the big boys… 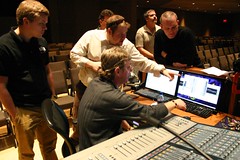 I’m sitting here in Atlanta a little bummed because I’m not going to be able to get to the Unleash conference at Newspring tomorrow.  It’s only a two hour drive, and I was going to drive over and back again, but we got slammed this week with a last minute set build plus a funeral tomorrow sooooo if you make it to the conference, please tell me how it went.  While I remain here, I thought I’d share a couple of recent tips I’m trying this week that I learned from a couple of engineers much more renowned then myself:

The first tip is an update to the notes I had from our session with Buford Jones.  One thing that Buford recommended was to put a sandbag or weight in the kick drum.  I don’t remember exactly why he said to do this; something about coupling it to the drum riser.  So Briley put a sandbag in his kick at Browns Bridge a couple weeks ago and left a very excited voice mail that was adamant about me putting a sandbag in our kick drum.  I sent our associate audio director on a wild goose chase this week to try and make a sandbag the way Briley described, but he was unable to locate the supplies.  So yesterday I grabbed a couple old mic stand bases from broken stands we had laying around and gave them a new chance at life.

First I took the front head off the drum.  Then I opened the pillow case for the pillow in the kick, and going on Briley’s advice I stuck the weights on top of the pillow.  After I put the weights in I sat behind the drums and the kick felt a bit punchier than I remembered.  At rehearsal tonight, it felt pretty good to me.  In fact, it was the closest to that hit-you-in-the-chest feel I’ve been able to get with our flown subs.  7|22’s drummer, Elliott, is the music director at Browns Bride, and he said I should put even more weight in.  Right now we have about 10 pounds in, but I might try and get it closer to 20 to see what happens.  So in the words of my buddy Chris Briley:  PUT A SAND BAG IN THE KICK!

The second tip(s) come out of a recent conversation I had with Robert Scovill.  Last summer when I saw Tom Petty, there was just an amazing clarity to the mix and I was trying to get some insight into what made that happen besides the obvious:  great band + great FOH engineer.  Robert said part of it was the Venue, but this tip isn’t “go buy a Venue”.  He also mentioned that he just does a lot of little things that all add up to where all of a sudden you’ve made a big impact and the mix comes even more alive.  The idea he talked about that caught my interest the most was he time aligns instruments on stage.  If you think about it, this makes sense to do for a large touring situation like Petty where the stages are huge and there is a lot of noise coming from the backline and wedges on stage.  The idea is that all that stuff(guitar amps, drums, etc.) is bleeding into your vocal mics, BUT the sound from the backline is hitting your vocal mics later in time than it hits the mics on the backline.

I can think of two things happening that this is going to help/fix.  The first is phase cancellation; if the idea of phase is new, I’d suggest you do some googling and learn all about it because phase is HUGE when it comes to audio.  Basically, the bleed in a vocal mic from an acoustic instrument on stage will most likely always be behind in time from the direct signal/close mic’ing of that instrument.  When the bleed isn’t far enough behind in time, you can have phase cancellation happening with the instrument.  When the bleed is far enough behind in time to prevent phase issues, the second thing happening is sort of the equivalent to adding any time-delay effect to a sound such as reverb or delay.  Think about this, if you have a singer singing acapella in the house, how clear does the voice sound in most venues compared to how it sounds solo’ed in headphones?  How clear is that vocal before and after you add FX to it?

The bleed can seem like a very small issue, and I honestly wondered how much it really matters because I’ve lived with it for a long time.  But I was curious so I did a quick experiment to try and play with time alignment a bit.  In my particular situation, the only acoustic instrument I have on stage is the drum kit; all our amps are off stage in isolation cabinets and our musicians are all on in-ears so wedges aren’t a problem.  I pulled up a service from a couple weeks ago in Pro Tools and did a rough time measurement on the snare bleed in the lead vocal mic vs. the snare mic.  It was about 1.9ms so I put a 1.9ms delay on all the instruments.  The difference was subtle, but the snare got a little fatter as a result.  It was enough of a difference that the next time I’m mixing I’m going to explore this much deeper.  I’m going to need to think about it a bit more in depth because while I don’t have a lot of open mics on stage, there are enough that I’m going to have to make some decisions as to what to time align everything to and come up with a system because there will be compromises.  If you’re on a Venue, I’d love for you to explore this and let me know (FYI for non-Venue engineers, the Venue has a delay for each channel that will come in very handy for this sort of thing…)

If you’re not on a Venue, you can still experiment with this on a smaller, yet larger scale.  Last summer at the Willow Creek Arts Conference, Robert recommended delaying the PA so that it is in time with the band on stage(I’ll be trying this, too).  This will be a little easier to do with either a delay unit on your main outputs or in a loudspeaker management box if you don’t have individual channel delays on hand.  But let me add a disclaimer to this tip:  if this audio thing isn’t your trade–and even if it is–be very careful about playing with delays in loudspeaker management stuff especially if you already had some guys come in and tune your room to the point that most people are happy with the system.  If you’re not an expert with system tuning and you just have to try this, just grab a delay unit and put it between your console outs and the processing; playing with loudspeaker delays can potentially royally mess up your system if you don’t know what you’re doing so make sure you can change it back.  As I experiment with this more, I’ll try and update the blog with my findings.

5 Responses to “Tips from the big boys…”