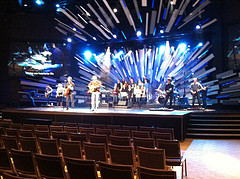 Happiness is a Warm Choir: Part 1 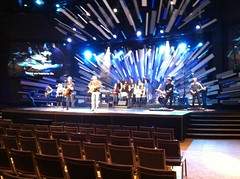 I think I’ve turned a corner in my career. Earlier this year our music department approached me about trying a choir at one of our PM services. Historically I haven’t been a fan of choirs, but I was actually into the idea of us trying it out. I believe the term “mini-choir” was actually used in pitching this, but since then we’ve actually had a few choirs in varying sizes on stage this year.

So why would someone like me with mostly disdain for the church choir actually be interested in having one?

Well, for one thing I knew it would be something different and a new challenge. In my entire time on staff at North Point, I’ve only dealt with a choir maybe twice and I don’t think those counted. In some ways, the choir is one of the true audio challenges in a modern church setting. It is true combat audio: un-amplified voices against the roar of a rock band.

Secondly, I knew it wouldn’t be the stereotypical church choir. If there’s one thing I’ve learned over the years about our music department, it’s that I can trust them to put the best people available on stage. I figured it was a safe assumption that these folks would actually sing out unlike some “choirs”….

But my real reason for getting behind this is I had a different vision for what a choir could be for us within the context of the mix and the room and the overall experience.

One of the bigger challenges for me is the feel of our East Auditorium. We have a lot of absorptive acoustic treatment up throughout the room. On the one hand it’s a blessing because as a mixer I don’t find myself fighting against the room much, and I have a lot of control of things. On the other hand, it can be a challenge because the dry-ness of the room can feel unnatural to me at times; the room doesn’t naturally help with feel like some venues. When we do events where everyone shows up ready to sing such as conferences and nights of worship, the room generally feels pretty good. But Sundays can be interesting because we always have a lot of first time guests and folks just checking things out.

In a large church, I think it can be challenge to get people connected, but it’s not really a church if that’s not happening. That’s why we are so big on moving people out of rows and into circles.

I guess I kind of think about some of the great concerts I’ve been to over the years. In particular, the first time I ever saw Dave Matthews Band comes to mind. It was about 15 years ago, and at the time I would have called myself a casual fan. That show was the first time I ever understood what Dave Matthews actually sings because I think I was the only one in the shed who didn’t know every word to every song. The band and the crowd just engulfed us. The funny thing was that I never felt out of place. I didn’t feel like an outsider. I just felt like I was a part of this thing that was happening in that the awful shed in the suburbs of Chicago on a hot and sticky night in July.

So when I’m mixing I’m often asking myself if I can help create that thing, that feeling.

Of course, there’s a fine line to this because at the same time I wouldn’t want someone in our room to feel like they’re the only one in the room that’s not part of a club. I know it’s always awkward to me to visit a church where I can hear people in my immediate vicinity singing when I don’t know the words or the songs and can’t quite participate. I think we all want an environment where people can check things out without any pressure to participate.

I guess what I’m trying to get at is I want it to sound like there’s something happening that everyone gets to be a part of, but it should be more vague and diffuse and not feel like someone right next to you singing in your ear. That was the thing about that Dave Matthew’s show; you just heard and felt it around you and not directly from the guy standing right behind you. That’s always awkward.

From a practical mix standpoint, that means chasing sound that envelopes the room and yet still comes from the stage. So I approached mixing our choir almost like working on a live album where the choir is a hyper-engaged audience that moves dynamically through the songs. Sometimes they might be slightly audible and other times they might almost take over and overwhelm everything. Sometimes it might be obvious it’s a group of people on stage and other times not so much. This gave me some leeway because I didn’t necessarily need the same kind of clarity I go for with other elements in the mix.

Next time I’ll look at the technical specifics of what I’ve been trying in this arena.