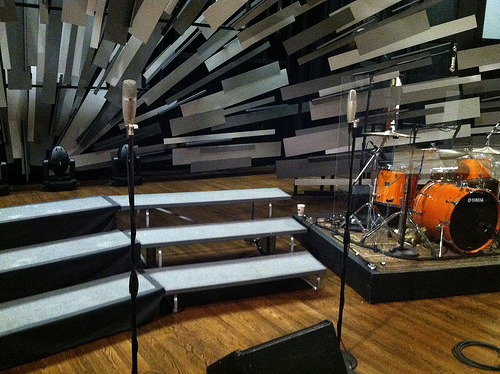 Happiness is a Warm Choir: Part 2

In my last post, I talked a bit about my philosophical approach to mixing choirs lately. Today I’ll get into the technicalities of it all.

Capturing the choir was the first challenge. For the first experiment with this our music department recorded some choir tracks that were fed to FOH as a stereo pair. I augmented these with a couple of KSM44’s on the live choir. I knew the mics would be a challenge regardless of how loud the choir sang because from a logistics standpoint the choir risers needed to go center-stage smack between our keys and drum risers, and the choir was a mini-choir of only about 20 or so people. But this is where my approach helped out.

I didn’t want to rely solely on tracks because that seemed like a copout so I took a slightly different mic’ing approach. Instead of aiming the mic closest to the drums at the choir, I positioned it to put the center of the kit 90 degrees off-axis from the mic. Ideally I would have liked to get the drums even more in the null of the mic, but that was about as far as I felt comfortable with in order to still aim at the choir. Fortunately, this actually helped out in putting some actual voices in the mic instead of simply drum bleed. 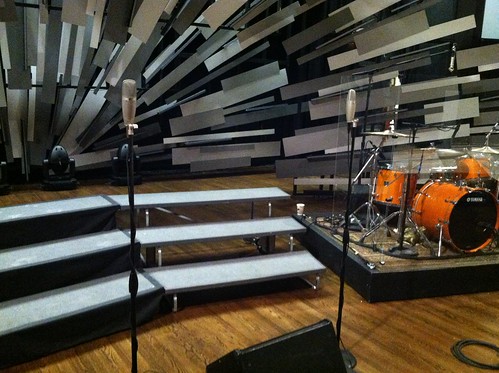 Another thing that helped in mic’ing the choir was my overall vision for the choir mics in the mix. Since I was thinking of quasi-audience mics, bleed into the mics wasn’t entirely bad. I even started thinking of the mics as drum-room mics at times as well, although, I knew that would limit how much of the mics I could use because I wanted to keep the drums relatively punchy. The compromise was a good bit of EQ on the mics to accentuate the mid-range voices and demphasize the drums in the mics as much as possible.

Next up was treating the vocal tracks. The first thing I did was throw these into a verb. Part of this was to help them sit a little better with the mics on stage, but it was also to give it more of a room vibe than pure choir. I started out trying to use more wet vocals than dry, but in the end settled on more dry vocal to maintain clarity. The final blend of choir tracks to choir mics was about a 50:50 split leaning a hair more towards the choir tracks.

The tracks and choir mics were then assigned to a single VCA so I could ride them as needed. Since the first couple times out was kind of a moving target and I didn’t know exactly what I’d get from the mics, I would set the VCA so that unity was a couple dB below feedback. That gave me an easy reference for when I was approaching the limit for the mics.

I added a couple of the Audix Microbooms after that night to our inventory specifically for choirs, and they’ve been my go-to mics since that night.

Choirs can be a big challenge, and I’ve been asked about them a lot over the years from engineers struggling to make them work. In all my choir experiences this year and in the past, I’ve learned the primary key to a successful choir mixing experience is the people in the choir. If they don’t sing as loud as they can, it’s going to be uphill. And by singing, I’m talking full-on-empty-their-lungs singing. Once you’ve got that to start, the more people you can get the better.

Really, this just comes down to fairly simple physics.

Let’s say we have a drum kit that’s 102dB at 3 feet from the kit. According to the inverse square law, we lose 6 dB every time we double our distance. That means at 18 feet from the kit, the drums will be around 85 dB. So to capture a choir 18 feet from the drums, how loud do you think that choir will need to sing to overcome the drums? In my book, they’ll ideally be at least 6 dB louder than the drums. And since you can’t really close-mic a choir, the choir actually needs to project their volume to be that loud at the microphone(s).

So let me wrap this up with some tips from my choir experiences over the years:

6 Responses to “Happiness is a Warm Choir: Part 2”