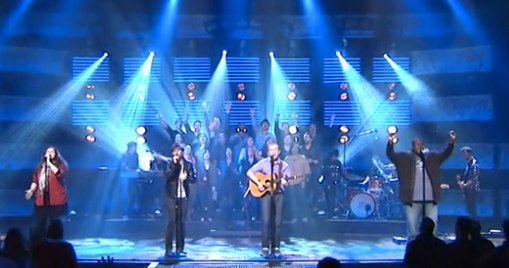 I’m not sure how exactly to lay some of this stuff out, so here are some final thoughts I had on being a part of Drive this year.

So, About That Choir…

I need to mention this up top because we were a little concerned about this. If you attended or watched online, you undoubtedly saw that we had a choir on stage for the second music set in the first session. The choir was positioned in the center of the stage right between our keys and drum riser.

What some of you might have also noticed was that we weren’t using a drum shield of any kind for the entire conference. So for those of you who didn’t figure it out, the choir you heard wasn’t live. Well….that’s not entirely true. When the drums weren’t playing, I slid the real choir mics in. But when the drums were playing, the choir mics were completely useless due to their proximity to the drums.

That said, the choir that was on stage WAS the actual choir you heard. We recorded them the week before on stage using the same mics. Recording them as they would actually be on stage also helped in allowing me to relatively seamlessly transition from the tracks to the mics whenever possible.

So if you watched or attended and you’re ever asked why we could get away with a choir right next to the drums and you can’t, it’s because we couldn’t get away with it either. The choir was canned. 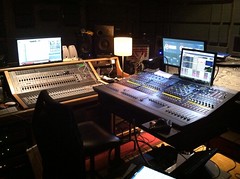 Working in the Real Studio

As soon as our 11am service ended on the Sunday before Drive, we started shifting consoles around and turning over the studio. We pulled the FOH rack from our West Auditorium Monitor World and the Profile from FOH. We then relocated our D-Show at Monitor World to FOH for the breakouts in that room. The move actually went fairly smoothly.

The hardest part was just figuring out where to put everything in the studio. Originally, we had planned on pushing the existing NP Online console back against the wall, but as I started disconnecting things it just seemed like it was going to be too hard to realistically accomplish in a short amount of time. The studio has been badly in need of an overhaul, but the timeline for the conference and resetting for Sunday after the conference didn’t seem like a wise opportunity to do this.

So I set the Profile up perpendicular to our normal setup in the studio. I borrowed a couple of speaker stands from our music department for my nearfields, and everything kind of fell into place.

I had three sets of speakers available for the conference. I spent most of my time mixing on a pair of our new Equator D5’s, but I also checked things on the Adams and Dynaudios already in the studio. Monitors were fed off two of the console’s PQ’s: one for the Equators and one for the existing studio monitors. I also setup my little computer speakers and fed them off the headphone jack on the console and left these running at a very low level the entire time so I couldn’t hear them when any of the nearfields were firing.

I felt like one of the biggest mixing challenges this time out was getting the vocals to sit right in the mix. I don’t know exactly what it is about that room, but this has been an ongoing thing for me in our studio regardless of what nearfields I use. The strange thing was I didn’t have any trouble working on some of the same nearfields the week before when I was camped out at FOH for rehearsals. I was actually pretty happy with the way things were translating that week when I checked things in my car and at home.

But once I was in the studio I always felt like my vocal levels weren’t translating properly. If they were right in the nearfields, they would be too loud everywhere else. So this is where my computer speakers came in very handy. I set up up a foot pedal that I could use to mute my nearfields and effectively switch to my computer speakers. At the low level, it became much easier to ballpark the vocals, although I still felt like I was mixing in the dark a bit because when I’d switch back to the nearfields the vocals would be uncomfortably low.

The feedback I was getting on mixes didn’t make this seem like it was a problem, so this was probably more of a head thing for me. My real takeaway from all this was I should have figured out a way to spend more time working on mixes in the studio prior to the conference simply to build more confidence. If this had been a post-mixing situation, it wouldn’t have been a big deal because there would have been a lot more time to check things and make adjustments. But when everything is live, it can be a little nerve-wracking if you’re unsure of what you’re sending out.

One of the crazier things I did this time out involved snapshots. As I mentioned last time, I used snapshots for managing some of the input changes occurring between sessions. My original intent was to simply change names and some settings like EQ’s and mic pre levels with a snapshot for each session. These snapshots would then get recalled on the day of the session before rehearsal began so I could still tweak from there. Then I decided to get a little more ambitious.

I like to keep my vocal mics within the 8 faders to the right of the master section, but I also have a couple other inputs that live in that handful of 8 faders. This leaves me 6 faders for vocals. In most sessions that would be fine, but our first session featured 9 vocalists. So I ran out of faders.

Fortunately, I never really had more than 4 or 5 vocalists singing in any particular segment so at some point I decided to snapshot my six available faders for vocals so that they would be the ONLY faders I ever used for vocals. In other words, I re-patched, re-named, and changed all the settings on those six faders and even did this within the first session. So for the opener I had the four vocalists up. Then during the welcome segment that followed, I fired a snapshot that changed those faders over for the first worship set. Plugins shuffled. Mic pre’s reset. Aux send levels changed.

It worked, but it got a little more complicated than I was comfortable with. I ended up manually changing recall safe settings on the fly using presets to keep from changing some other settings later in the session. At the end of the day, it felt like I went a step farther than VENUE’s snapshot automation is really geared for at this time.

I’ll probably say that I wouldn’t do it again, but I know I would. I’ve always been a proponent of landing things in the same place on the console, and doing this made things very intuitive when I actually got into the sessions. On the other hand, it took a lot of thinking time up front along with checking and re-checking to make sure all the right things changed within each snapshot so that I could jump back and forth as needed during rehearsals. I’ve got some ideas on how to streamline some of this in the future to keep it a little simpler, though. If you’re ever contemplating something like this, make sure to give yourself a lot of time to do the programming. This isn’t for the weak of heart.

Overall the conference was a great learning experience for me, and I realized there are a couple of things I need to figure out sooner rather than later to help with online in general.

As I mentioned in my last post, it is very easy to feel completely disconnected while mixing online. After talking with JJ who typically mixes North Point Online, one of my projects this year will be to figure out how to get some kind of camera system set up between FOH, the NP Online studio, and Monitor World. I’m thinking of something along the lines of Apple’s Facetime that’s always connected. There’s no substitute for being able to see a face that you’re talking to, and I’m hoping even just having the ability to see the rest of our crew could go a long way in bringing our existing community even closer.

Another thing I figured out is I need to feed my Playback buss from FOH to Monitor World and the studio. A recurring thing that burned me revolved around when to fade things out that FOH was manually fading out. For example, there was music under our hosts during one of the welcome segments that FOH was firing and bringing out. The problem was I had no way of knowing when it was fading out. If I took it out too early, the music would still be audible in the room mics. If I was too late, I risked having a track stop abruptly.

I already have the buss on our FOH console that is dedicated to playback elements like videos, pre-recorded music, sound FX, etc. Now I just need to patch it to a couple of outputs on the console and return them to a couple of inputs. That way, it will be much easier for NP Online to stay in sync with what’s happening in the house when they need to.

It feels good to be down with Drive, and Easter feels like a breeze after coming off of it. If you were at Drive or watched online or even are just curious about something, please feel free to leave me any questions in the comments.