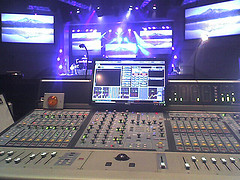 Guerilla Mixing on the Wrong Side of the Road 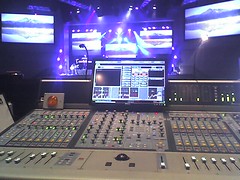 So I had the chance to mix 7|22 a couple weeks ago down at Buckhead Church. If you’re unfamiliar with 7|22, it’s basically a worship service for post-college singles. Before coming down to Atlanta, I used to watch 7|22 on the web so it was cool that things worked out for me to spend the night mixing it.

7|22 is quite a bit different to mix than our Sunday services. For starters, they like it a bit louder so I got to push concert levels which is always fun. They also run it pretty loose so there isn’t really a music rehearsal. It’s more of a pseudo-soundcheck/rehearsal; I think I maybe got two or three songs all the way through. I could–and maybe should–have used the previous week’s mix as a starting point, but that’s much more sensible than I ever am. Instead I opted to start from scratch, and mix it guerilla style. So it was a little rough and heavy-handed at times, but it was good for me at the same time because it really threw me out of my comfort zone. The coolest part of the whole experience was how organic the music was compared to our Sundays, especially during the last set after the message. That was so much fun to mix. Although, it took me to the last set to really find my pocket, but that happens sometimes.

Part of why I jumped at the chance to mix 7|22 that week was because it gave me a chance to try out a couple things I’ve been toying with. First up was trying to mix with the sidecar on the right side of the main unit on the Venue; Dustin flipped it at Buckhead the week before. I don’t know if I’m just too used to having it on my left, but I was not digging it on the right; I actually felt like I could reach less channels and ended up with a completely different set of VCAs to compensate. It felt like driving on the wrong side of the road all night; muscle memory is an incredible thing, and having things in different places really had me thinking a lot more than usual to find some things for transitions. The nature of the night didn’t lend itself to snapshots, either, so I did it old school without automation…well almost no automation; I did get song tempos from the band ahead of time and programmed those, but that was about it. The plus side was I really liked my new VCA setup, and I’m going to keep trying those for a while.

The other experiment was with the overhead mics. I’ve really been digging my whole drum time alignment thing with XY overheads(especially our new Rode NT4), but the guerilla nature of the evening didn’t really lend itself to that. So tonight I got to try something Dustin’s been experimenting with: under-mic’ing the cymbals. Big Mick has been doing this for a long time with Metallica, and John Cooper has been doing it with Max Weinberg’s cymbals on the last several Springsteen tours. I actually kind of liked it. It’s not my preference, but if I was forced into it I could live, although I would like my own set of KSM137’s to do it with. I’ve been playing around the last couple weeks in one of our rooms with some ADX51’s under the cymbals, and I’m going to flip it back to overheads this week so mic choice–among other things–probably definitely played a part in my being OK with it for 7|22.

So 7|22 webcasts everything, and you can check out the night online if you really want to. The message that week was called Why God Waits, and I’m sure it’s still up in the 722.org archives. Like I said in a previous post, I don’t think the mix quite translated from the room so it is what it is. The last acoustic-ish set happens about 3/4 through right after the message.

TweetShare
If you enjoyed reading this post, please share it!
Guerilla Mixing on the Wrong Side of the Road