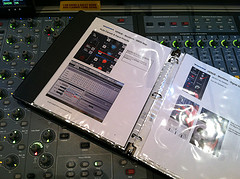 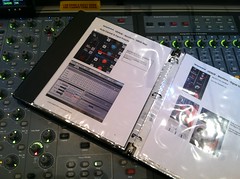 I mentioned in my first post on Going Digital that the personnel side would be the most challenging aspect of the transition. Fortunately, I had a lot of time to think about how this transition should work since we’ve been eyeing it for several years. I actually started training our team a couple weeks ago immediately after everything was approved since our existing FOH control surfaces are being relocated to monitor world.

We’re changing out equipment, but we’re not changing the fundamentals of mixing monitors. So, for me, it’s very important to initially teach, demonstrate, and explain the new equipment within the context of what our crew is already familiar with. I’ve often described this process as a geography lesson. I’m just teaching the new geography of the console relative to the familiar geography of the consoles being retired.

The new consoles definitely add a lot of new features and potential abilities for our crew, but we’re not going to go there, yet. I’ve been working with VENUE now for almost 7 years now and have introduced a lot of guys coming from analog gear to the console. If there’s one place I’ve seen consistent hangups, it’s when engineers dig into the extra bells and whistles too soon. Bells and whistles are great, but without a disciplined approach they can be a distraction to the music, and remember we’re all about music this year.

So we’re going to start with the basics and ease into the extras over time. Our crew is ambitious to learn the new desk, but it’s important to me to be very realistic about the process. Right now we have about 8 monitor engineers capable of walking in and dialing mixes up from scratch. Our two auditoriums on Sunday morning and the additional 6pm service puts each engineer on 1-2 times a month depending on availability. That means once both consoles are installed, our crew members will average using the console somewhere between 12-24 services & rehearsals in the first year with roughly 2-3 weeks between each time they mix. That’s not a lot of time to develop a new muscle memory that is also competing with an ingrained one. I’ve found familiarity with gear is all about reps, and every week away from the console is potentially a step back especially when our crew has become so adept with our existing gear. So I have two immediate tasks I’ve been working through for the last couple weeks.

Task one is one-on-one and small group training to introduce the console in person to the team. I’ve been devoting at least one night a week along with time after rehearsals to do this. The end goal here is simply to get our team up and running so we can get through rehearsals and Sundays delivering the same results we’re already getting.

These sessions typically start by walking through the console showing where the controls our team’s familiar with on the existing consoles can be found on the new consoles. Next we move toward talking through some workflows that will need to be tweaked to accommodate some slightly new ways of working. Since the crew is coming from analog where every control was at their fingertips, they need to rethink some things a bit while also learning a couple new tricks like how “Flip-to-Faders” works. All this happens using virtual soundcheck with recorded tracks from an actual Sunday because everyone learns MUCH faster when they can connect what they’re doing with an audible result. A VENUE without virtual soundcheck is like a car missing a wheel.

Once I get someone behind the console somewhat comfortable navigating and working on it, something I like to do is give them my stress test. This is basically a sabotaged setup. I turn things on and off. I pan things to extremes. Inputs get patched wrong. Gains get jacked up. Basically, I create a perfect storm of worst-case-scenarios that our team might inadvertently run into over the course of mixing. This is a powerful tool because it forces them to identify problems first by hearing them the same way a musician on the other end of the mix would. Then they go on a scavenger hunt across the console to find the controls to fix it. It’s trial-by-fire without the hazards that come with a live band on stage. It’s awesome to watch our guys get faster and faster as they work through this stuff.

My second task is creating helpful resources for our team. First up is a console map of sorts. This is basically a document that shows the controls on the old console and where they are on the new console. The idea is that this can be a reference that lives with the consoles so if someone gets stuck in the coming weeks and months, they can pull out the guide and find what they’re looking for.

Other documentation revolves around any changed workflows we’re going to deal with from day one. For example, during line checks, our crew checks all of our IEMs to make sure the left and right outputs correlate and signal levels to each side are consistent. This is fairly simple to do on our analog consoles because they can easily pop the onboard oscillator in on the left output, the right output, and then both outputs of a mix. It’s a little different on VENUE so I have a step-by-step guide outlining how to do this. Right now I have about 32 pages of notes I’ve jotted down in Penultimate–part of my 2012 paperless journey–right now that I’m also formulating into resources and training strategies for the team.

I think our team is on-track to being prepared to launch one of the consoles in one of our rooms. However, I also realize that it’s one thing to work with a simulator, and something else to be in the heat of a soundcheck with musicians calling for changes. Fortunately, I have some strategies ready-to-go for then as well that I’m sure I’ll be talking about when we start lighting up the new consoles in the next week or so.