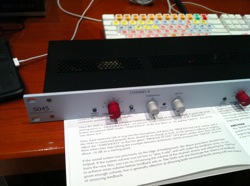 I probably spend more time writing about the music side of what we do because it tends to be the more challenging and demanding aspect of our position. However, for most of us, the fact remains that a large portion if not the largest portion of our services are focused on spoken word. Today I have something that could be and probably is changing our world for it.

The fine folks at Yamaha recently loaned me a new piece of gear to try out: the Neve Portico 5045 Primary Source Enhancer. I was first turned on to this by John Mills late last year which inspired me to seek out a demo. Then when Tim Corder and I crashed Passion in early January, the first thing I noticed at FOH was the 5045 sitting right on top of one of the FOH consoles. When I heard how much gain our friend, Jeff Sandstrom, was able to get on Countryman E6’s in the Georgia Dome, I started to get really excited about trying the 5045 in my room.

The 5045 has been generating some buzz lately, but what exactly is the Neve 5045 Primary Sound Enhancer? Well, it’s hard to explain because it’s kind of a unique device. The basic premise, though, is it helps you achieve more gain before feedback on a microphone without affecting the tone of your source.

What it’s actually doing is a bit of a mystery, and there is a lot of voodoo building around this box as a result. From the experimentation I’ve done over the last 3 weeks, I would say this is ultimately a dynamics processor of sorts. The 5045 is like a souped-up expander, but it doesn’t operate in the traditional sense. 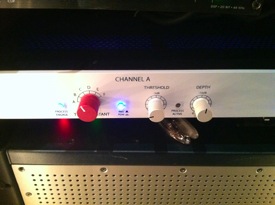 There are three main controls on the front of the unit: Threshold, Depth, and Time Constant. The manual basically instructs you to set the threshold so that the “Process Active” light is green when someone is talking or singing or playing or doing whatever it is that makes the sound you’re trying to capture. The Time Constant adjusts how long it takes to attenuate the signal when the sound stops, and the Depth control adjusts how much attenuation happens. Based on the controls and description, I would peg the 5045 as an oversimplified expander, but that’s definitely not the case.

Now before I go any further, here’s a little background. Several years ago I added a Shure DFR-11 EQ to our rack and I’ve been running my Spoken Word group through it ever since. I got the idea from John Cooper who was using the DFR on Bruce Springsteen. Cooper used it because the DFR-11 also happens to be a feedback eliminator, and sometimes the Boss likes to hop out in front of the PA faster than Cooper can kill any ensuing feedback. I started using the DFR-11 with our old PA because due to the coverage of the boxes, there were frequencies that would sometimes ring a bit that were audible and distracting on stage but inaudible at FOH. Since the reality is that more people hear our messages outside of our walls than in them, it’s important to get as clean a capture as possible. So I sucked in my pride and installed a feedback eliminator in the rack to use as a safety net.

When I received the 5045 in early January, I strapped it across my Spoken Word group replacing the DFR-11. I ran all Sunday morning using it, and there was definitely an increase in gain before feedback. However, it seemed to go beyond that and actually cleaned up the mics going through the group. This wasn’t completely obvious at first, but when we played around with Virtual Soundcheck and took the process in and out it was pretty obvious how it was removing ambient noise not only when there was no signal, but also while someone was talking.

One of my biggest gain before feedback challenges is baptism. Our baptismal is off-stage and elevated placing it out in the house. On top of that, one of our MSL-4 sidefills points right at it. The MSL-4 is aimed slightly off to get the baptismal out of the loudspeaker’s coverage sweet spot, but there’s still enough spill to make things interesting. Then, of course, the content of the service element creates a challenge. Since it’s baptism, it tends to be a more intimate moment, and the baptisers aren’t always experienced public speakers who understand how to project when speaking. Consequently gain-before-feedback is almost always an issue. However, with the 5045 engaged I don’t feel like I have any of the usual issues getting the baptism mics loud enough. I feel like I have much more gain before feedback, but in some ways even more importantly I feel much more confident in pushing the fader up. That confidence alone is a priceless benefit.

Contrary to what some might think about this device, you still need to properly position and equalize your mics to minimize feedback as much as you can. I’ve been referring to it in-house as The Magic Box, but it’s not a magic bullet for feedback issues. The 5045 gives you additional gain before feedback, but it’s NO substitute for proper mic’ing and EQ techniques. Your mics can still ring while using it, but when everything is properly implemented, the 5045 can go a long way towards giving you an extra bit of gain you might need.

While I’ve mainly been using a single channel of the 5045 on a group, I think it performs a little bit better when inserted on individual inputs. I’ve experimented on headworn mics and I’ve also experimented on lead vocalists, and the results have been great. Moving forward I plan to continue using one channel on our spoken word group with the second channel in reserve for any problematic vocals. Next up I’m going to try it on some BGV’s since our BGV’s tend to have the worst mic bleed, and I’m interested to see how the 5045 might help.

If I have any negatives about the 5045, I’m not real crazy about the power supply. The unit uses an external supply that converts to DC. The downside to this is while you can rackmount the unit, you’ll still have this dangling power supply in the back of the rack you’ll have to figure out a way to dress. But this is a minor beef on a piece of gear that is otherwise quite nice.

Overall, if you have any interest and some budget available, I would say you can skip demoing the 5045 and just go ahead and purchase it. Every audio engineer I’ve demonstrated it for thus far is ready to add it to their rack the minute I turn the process on. If you have any skepticism, just buy one from your favorite dealer who will let you return it if you don’t like it, but you won’t return it. This is an expensive processor, but I think it’s definitely worth the investment. You get cleaner mics, more gain-before-feedback, and more confidence in mixing. It wouldn’t surprise me if this turns into a very common piece of gear in the church over the next few years. I hate to call something a game changer or indispensable, but this is a unit that is going to seem that way for a lot of us. I’ll end on this note: I purchased the demo unit last week.

I’m embedding John Mills original video that turned me on to this thing below. Check out the video and then go check out the 5045.