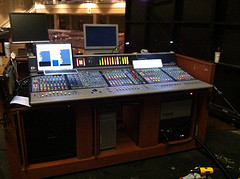 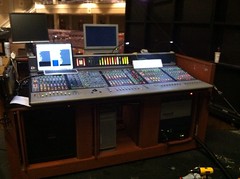 This week we completed installing the first of our new digital monitor consoles. It was a long week that actually began last week when the consoles arrived.

After getting all the equipment for our consoles sorted last week, I started by installing the stage racks in our equipment room. Once they were in I installed the additional input and output cards we purchased for the console along with the options we added to our FOH rack. I also pulled and cut all the snake lines for the VENUE snake which came out to 9 100′ cables; eight for the VENUE and one as a spare. 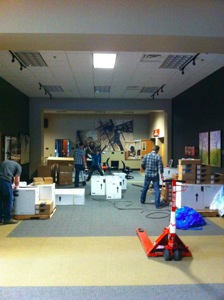 In addition, I did a little bit of work under the stage. Our existing feed to monitor world off our main splitter also features a split beneath the stage. This was done many years before I was on staff so we could have flexibility to put monitor world in either of the stage wings. This split has come in handy for us in the past to add a 2nd monitor console for large events. So for the new configuration, I pulled the spare multipin connector under the stage and back to the equipment room so we could just disconnect our existing fanout from the old console and reconnect it in the amp room to the new stage racks. This way we still retain the option to bring in a second monitor console and connect it at monitor world should programming dictate it in the future.

On Monday of this week, we started by stripping down our furniture to bare racks. We vacuumed, dusted, and blew it all out, and then started installing the new FOH rack for the console along with drawers for supplies and a Mac Pro; the Mac will be used for Pro Tools and monitoring wireless mics. We also went back under the stage to pull the new VENUE snake lines from monitor world ot the equipment room. The east console was at about 90% by the end of the day on Monday.

On Tuesday I worked on finishing up the east console in monitor world while the rest of our install crew worked on doing some pre-install work in the equipment room for the west monitor console. We’re actually about a month out from the West Auditorium swap since there’s some infrastructure pieces that are changing out in the process. However, I wanted to take the opportunity this week and over the coming month to get as much done as possible ahead of the switchover. The closer we can get to simply turning off the old console and turning on the new one, the better off we’ll be.

Something I’ve been really happy with in the east in this process is we made our monitor console more mobile than it was in the past. Since our backstage real estate is limited, we’ve always had to place monitor world in a compromised location with zero sightlines to the stage. This week we loomed all our snake, network, and power lines to the new console in Techflex so we can easily manage all the cabling and move our console into position where there are sightlines for soundchecks and rehearsals.

The first rehearsal on the new console went quite well, and our band seemed happy with the results. The training we did over the month of January definitely seemed to pay off as one of our volunteers handled the mix with only a little help from me here and there. I’ll try and talk a little more about a couple other ways we set ourselves up here for success in another post. 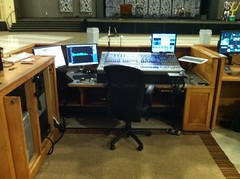 Of course, monitor world wasn’t the only thing affected by this transition. Since monitor world is getting our D-Shows, the control surfaces at FOH were replaced by Profiles in the process. With the help of some of our volunteers, we installed the East Auditorium Profile after our last monitor training night last week. The West Auditorium Profile was installed this week once the East monitor console was in good shape. Adrian Varner, our newest production staff member, also did a great job in reorganizing FOH in the west and shrinking our footprint a bit so we can add some seats in the room.

There’s still a bit of cleanup to be done on all of the installs since a big part of this week was to just get everything up and running, but now I’m looking forward to things slowing down a bit from the last month with the first digital console up and running.