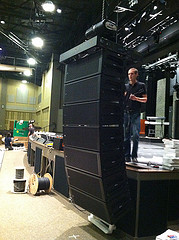 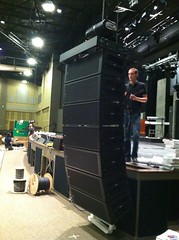 So, back to the new PA. Here are some system specifics for everyone who has been wondering.

As I mentioned we basically installed the same rig in our West Auditorium that we put in the East Auditorium 3 years ago. The rooms are nearly identical in footprint; the West auditorium doesn’t have a balcony, and the trim height is a few feet lower, but they are otherwise identical and literally right next door to each other. I’ve always wanted the rooms to be as identical as possible from an equipment standpoint, and this was our opportunity.

The system is comprised entirely of Meyer Sound loudspeakers. The main arrays are MICA’s(7 per side) straddled by DF-4’s for downfills. Subwoofers live under the stage in a horizontal array of 10 M3D-Subs.

The M3D-Sub was an important choice for us because of its cardioid pattern. Since our auditoriums literally back up against each other, we’ve opted for cardioid subs to minimize low frequency transmission between rooms as much as possible; it’s there, but it’s greatly reduced compared to what we’d get using a traditional sub. Space limitations in the rooms limit our abilities to do a cardioid configuration with traditional subs, and the construction of the building limits how much weight we want to devote in the air to the sound system. So the best option is a cardioid sub. They work well for our purposes and stay out of sight under the stage leaving room for set pieces on stage and seats in the house.

So a question I sometimes get is why don’t we go with traditional, unpowered boxes in the air to save weight? Just for some comparison, one of the closest traditional boxes I looked at for a while is the d&b J-series, and those weigh 18 pounds less than a MICA. So we would have saved about 250 lbs. at the end of the day which isn’t enough to move the subs under the stage up in the air.

The subs are joined by 10 M1D front/knee fills under the stage to help bring the image down a bit for the front rows. The far side sections feature 2 JM-1P’s outfills in a vertical array with a DF-4 under. Finally a single backfill JM-1P covers a few seats on the outsides of the room in the Bermuda triangle of seats between the main arrays and outfills.

The biggest change to the system from the East auditorium are the outfills. The East features a couple of MSL-4’s that pre-dated that system’s install by a couple years, and those side sections are the one area in the room I’ve heard the most comments about from my fellow audio-snob friends. MSL-4’s are still a favorite box for me, and what we have works in the East, however, there are a couple things about the area I thought we could do better.

For one thing, the JM-1P integrates much better as a fill when used with Meyer’s M-series arrays because the horn design is very similar. The JM-1P uses Meyer’s REM(Ribbon Emulation Manifold) just like the MICA’s we’re installing. This helps from both an alignment and an experiential perspective. Secondly, the JM-1P’s low driver is a 15″ driver compared to the 12″ in the MSL-4.

I knew from modeling and from experience in our other room that our sub arrays just aren’t going to cover those outside seats as much which is one of the many trade-offs we make in the system design. Some folks don’t mind the destructive interference that happens when you side-stack subs, but we’re not fans of it. Consequently, we trade-off some of the bottom end in our side sections. The two JM-1P’s plus the DF-4 on the outside give us 3 15″ drivers in the air for those side sections which help keep them warmer.

System processing for the system is handled by three Galileo 616’s. We looked at using the new Galileo Callisto 616 processors, but we decided the original Galileo would be a better fit.

The Callisto has some nice features like the U-Shaping filters which are sort of like the Lake’s Mesa filters. Callisto also has a feature called Delay Integration for their M-series arrays which can help with phase alignment to other boxes in Meyer’s product line. However, the new features come at a tradeoff with some of the features in the original Galileo. In Callisto you lose things like a 5-band parametric on the input EQ, Trushaping output EQ’s, and All-Pass filters. While I would have liked having the Delay Integration feature, I didn’t necessarily want to lose the old features.

1.) Using Galileo’s 1 & 2 to mirror each side of the room makes system optimization and control much easier.

2.) Galileo’s 1 & 2 are basically the main system processors. If I lose one of them, I can always swap it out with our third Galileo and go without front fills for a day or two until I can get a replacement in.

If we had gone with Callisto’s for the West Auditorium PA, the configuration would have been 2 Callisto’s for the left and right of the house with a Galileo 408 to handle the subs. The problem with this configuration is it leaves no easy emergency solution if I lose a Callisto. Plus, with the Callisto being a newer processor, getting a quick replacement in could be more challenging. Sticking with Galileo 616’s for the West gives us a similar configuration to the East’s system processing and offers us more emergency options.

That’s the basic gist of the new gear. If you have any specific questions related to the system, the comments are now open.