I’ve been getting requests for this so let’s talk about our little bass DI shootout from this week.

One of the things I want to do this year is get some better DI’s specifically for bass guitars. A lot of our players bring their own, but for the guys who don’t I want to try something else. Some of our campuses are using the UA LA-610 which they swear by, but I’m just not a fan of sticking a full channel strip on stage. If someone brought it in, I’d be happy to let them use it, but it’s just not what I’m looking for.

If there’s really one thing I’m looking for, it’s the bass DI Bruce Swedien has. I don’t want the same model, though. I want his actual DI that he used on Thriller. It’s just a metal box with a UTC transformer in it, but according to Mr. Swedien he’s never been able to duplicate it.

When I put Thriller on my turntable, the bass is glorious in my home theatre. It’s rich and deep and….and…I want to go to there.

Yes, I obviously realize there’s a whole lot more to the tone on that record than just this little box–I mean, a lot of that record is SYNTH bass to begin with–BUT, I love it’s simplicity and knowing it was still a part of the package is enough for me to want it.

Since Bruce probably isn’t going to graciously give or sell me his DI, I want to find a simple DI that I can trust. I want a box with a transformer and no frills that sounds like the instrument plugged into it or at least a great version of that instrument. I don’t want tone knobs and gain knobs and all kinds of silly switches and buttons; I have crayons on the desk for coloring. Plus, EVERYTHING instrument related on our stage moves in every service so adding more stuff that can get bumped and messed up to an already large amount of stuff that can get bumped and messed up doesn’t get me excited.

The main DI we’ve resorted to for bass has been an Avalon U5 for the last 9+ years. It’s a great DI, and I know some guys love it. However, I’ve just never been blown away by it. My favorite weeks have typically been when guys have brought in a REDDI and the occasional Evil Twin. However, I can’t say any of these experiences have been revelatory. In fact, I don’t think I’ve ever had a revelatory DI experience. I’ve had revelatory PA experiences and revelatory compressor experiences, but not DI’s. They just don’t get me fired up like I know some guys get. DI’s aren’t a mountain I’m going to die on.

I was planning on picking up a REDDI this year because, as I mentioned, I’ve had good experiences from the guys who use them regularly. However, some of our guys have remarked they don’t like tubes with their basses so I wanted to get something solid state to use as well.

When the new Neve RNDI was announced shortly before NAMM, I immediately contacted one of my vendors to get a price. When I found out it was selling for under $300 I jumped on it because I figured even if I don’t love it on bass it’ll probably be great on something. It arrived last week, and this week we finally got to give it a try.

While we could have just hooked up the RNDI and used it, I wanted to do a little comparison to see how much of a difference there really is in the DI’s we have on hand. You see, sometimes we audio engineers and musicians have a manufacturer bias that clouds our judgement. So, I wanted to make sure we don’t all ooh and ahhh over it just because it says Neve. 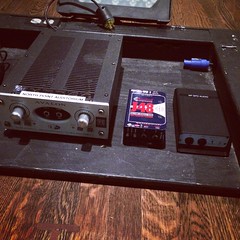 The DI’s used for the testing were our trusty Avalon U5, a Radial J48 which we have a lot of, and, of course, the new Neve RNDI. The bass used for the test was a Music Man Stingray 5. We left everything flat and plugged straight into the DI’s. Here are some clips from the test. These are embedded .WAV files so it might take a little longer to load than usual.


Of the three, everyone listening preferred the RNDI with the J48 very close behind. Listening through our PA, the Avalon sounded muddy with less definition in comparison to the other two, but the RNDI just had the more clarity. Rick Meeder who played bass for the test also preferred the RNDI in his in-ears. One of the things I struggle with the most in mixing is getting bass guitars to cut, and using the RNDI the bass had much more of an edge to it than the other two DI’s. One should note, though, that the U5 has different tone settings we bypassed for the test and playing with those a bit might have given us a result closer to what we liked about the other two DI’s.

So what should you takeaway from this?

First off, this doesn’t mean the RNDI is the best DI. It’s just the one we liked this ONE time so don’t all go running out to buy one just because we liked it. Some of you may prefer the U5, and some of you may like the J48. You’re not wrong just because you disagreed with myself and the other musicians who were listening when we tested this thing. Preferring something else just means you’re a actual person.

I think the real takeaway here is a DI can play just as much of a role as a microphone can when it comes to the sound you’re capturing. DI’s and microphones affect the tone so, like microphones, it probably doesn’t hurt to have a couple options on hand to try on different things. We liked the RNDI this week, but next week with a different model bass and player maybe the J48 will win. Maybe the U5 would come out way on top. We’ll only know for sure if we try them all out. That said, I have a feeling I’m going to parting ways with our U5’s pretty soon. Soooooo, if you’re interested in getting a U5, maybe you should go hit the Contact button above….