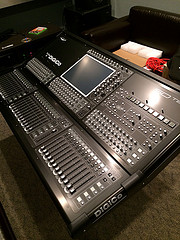 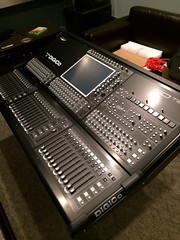 Audio at North Point has naturally come a long way in the last 8 years since I joined the team, and this month we are destroying the final audio bottleneck for us: our broadcast input limitations. For the last two years, we’ve had the capacity for 96 inputs at FOH and Monitors, but we’ve been locked into only using 56 analog inputs for Sundays in our East auditorium due to the input limitations of our broadcast studio capabilities. That’s all going to change in a few weeks when we install a new DiGiCo SD10 for broadcast use.

The console arrived this week, and after posting a picture of it I’ve been getting some questions about why we went with DiGiCo.

The basic answer is after examining what is currently on the market for our current and projected needs, the DiGiCo was the best fit for us.

There are a lot of consoles on the market today that could have fit most of our wants for the studio such as:

2 Responses to “The “Last” Bottleneck”