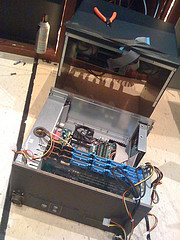 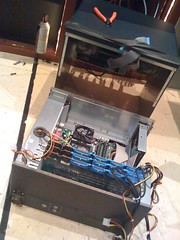 If you’re a digital console user or think you’ll ever use one, this affects you.

A couple weeks ago, after updating one of our consoles to the latest software, I had a strange error message pop-up. Avid tech support responded that it might be a virus. I figured they were nuts, but I still went ahead and installed a virus scanner in my Windows virtual machine that I run on my Mac laptop.

Then it hit me that my drives have been used in some other places that might have been exposed.

This year I’ve started doing more freelance work which has exposed me to other people’s consoles, and I suppose I could have easily picked it up through one of those. Or maybe I got it off a client’s computer while I was doing some PA work with their system DSP; so much for backing up the work I did for them.

But maybe it didn’t get in from one of my drives. Maybe one of the engineers we’ve contracted had an infected drive. Or maybe a contractor at another campus infected that campus’ consoles, and a staff member came up for an event and inadvertently infected one of our consoles. Then I spread it around the 4 consoles I maintain.

The unfortunate reality is that there’s just no telling exactly when or how a virus got into our consoles. It’s just a mess that needed cleaning up.

This could just as easily happen to you. If you use digital consoles and USB drives with them, I think you should assume at this point that you are at risk. In fact, if you use a USB drive that gets used in multiple machines, you are probably at risk. So here’s what I recommend:

One Response to “Infected Consoles, Oh My!”