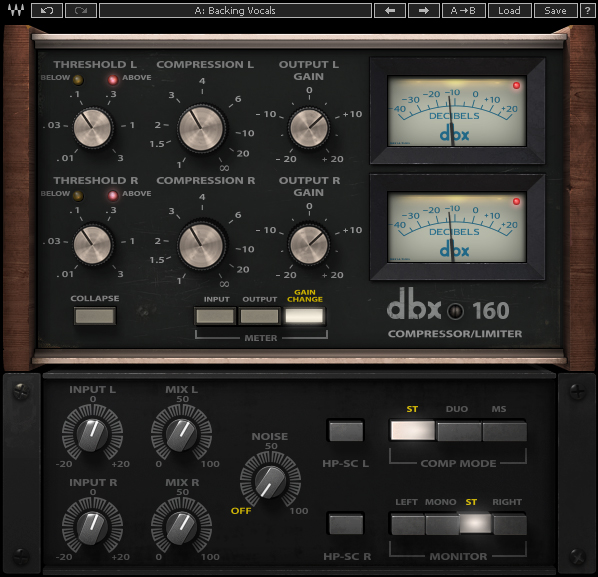 When I’m working with engineers both new and old, one of the hardest things about mixing for people to get their heads around is compression. Today I have the first of a couple learning and exploration techniques you can play with if you’re trying to wrap your head around the mystery of compression.

Full disclosure: I didn’t come up with these techniques, but unfortunately I don’t remember exactly where I found them so my apologies to the inventors.

Both of these learning/exploration techniques are probably best accomplished with a DAW, but you could probably also use a console. I use Pro Tools in my studio so that’s what I used to create the examples here. Just make sure your DAW/console of choice can do some form of delay compensation because without it the second technique won’t work.

. It’s a great book on mixing, and I highly recommend it as a resource. You can find his multitracks here. For the examples I’ve created, I used audio courtesy of Counting Crows, Telefunken, and Sweetwater Sound.

First up is the sine wave technique. You’ll need some audio of a sine wave or pure pitch, some audio of your favorite instrument(s) for testing, and a compressor with a sidechain option to try this out.

Import all your audio files into your DAW session. If you import multiple instruments, you’ll want to mute all of them except for the instrument you’d like to test first; personally, I think drums are a good place to start when trying to figure out compression. Next assign the output of your sine wave to your speakers/headphones/etc. and the output of your instruments to an internal buss. Insert your compressor on the sine wave’s channel and set the compressor’s sidechain input to the buss you routed your instruments to.

So what’s this going to do?

When you start playing all your audio, you should only hear your constant sine wave if you’ve set everything up properly. Now start adjusting the controls on your compressor. As you play with the compressor, you will hear the compressor acting on the sine wave the same way that compressor would act if you inserted it on the instrument you’re testing. The great thing about this technique is since the sine wave is a steady tone, it’s easier to hear the activity of the compressor as it acts on that tone.

When you try this make sure to play with all the controls. Listen to what different attack and release times do. Listen to how the ratio affects things. Try using lots of compression and just little bits. Make sure to try out different instruments as well. As I mentioned, I believe drums are a good place to start because of their short transient bursts, but make sure to play with guitars, vocals, pianos, marimba’s, kazoo’s, etc.

Let’s check out a real example of this technique. I used a 200Hz sine wave and a snare drum recording for this. I picked 200Hz because it’s almost bearable to listen to for extended periods. For a compressor, I chose the Waves dbx® 160 Compressor/Limiter because it’s one of my favorite compressor plug-ins right now, and it has our needed sidechain input.

First, let’s listen to the original snare and the snare after compression. I had the compressor doing about 5 dB of gain reduction along with another 5 dB of makeup gain, and I believe the ratio was set to 4:1.

Now, let’s use the sine wave technique to hear what the compressor is doing:

The second thing I hear is part of what excites engineers like me about compression. Did you notice that little pop just as the tone’s level dips? That’s actually distortion, and it’s one of the artifacts we sometimes get using compression. Sometimes distortion is undesirable, but in this case it’s actually a good thing because it’s adding snap to the drum.

This is the reason why many mix engineers like myself don’t always use the same compressor on everything. Different compressors do different things on different instruments. In this case, we get that added snap from the 160, but not all compressors add that. The 160 doesn’t have adjustable attack and release controls, and if it did we could probably change that characteristic a bit.

This is part of why the sine wave technique can be so interesting. It’s a way to hear how the different controls on a compressor affect things, and how different compressors act on different instruments.

How about another example. Let’s try using a bass guitar this time with the same compressor. Here’s the original bass guitar:

I like this clip as an example because the first thing I notice when I listen is the volume of the playing can be a little inconsistent at times. This is very typical with bass guitars, and one of the reasons compressors can be their friend. If you’re having a hard time hearing this, listen around 5-6 seconds in where the playing gets a little softer. You can also try turning down your speakers because sometimes listening at a lower level can make that inconsistency a little easier to notice; if you put the loud notes on the edge of your hearing perception, the quiet parts will dip out of your perception. This isn’t something we can usually get away with doing in an actual live mixing scenario, but it’s a trick a lot of studio mix engineers employ when they’re trying to level out an instrument.

Now let’s hear what happens when I use about 10 dB of gain reduction along with 10 dB of makeup gain. First, let’s listen to the tone under compression:

The things I notice here are some occasional big dips in level along with some smaller, subtle level fluctuation here and there. I also hear some soft popping especially on some of the bigger dips in level along the same lines as the popping we had with the snare.

Now let’s listen to the bass with these same compressor settings applied:

The first thing I notice now is the level of the instrument is more consistent. The transients on some of the notes are also accented from the character of the compressor which might help give them some punch to help cut in the mix.

These are just a couple of examples of compression in action. The point of all this is to take this technique and apply it to things with the gear you have so you can better understand how your tools work. And this technique isn’t just for beginners. You can use this to explore which compressors work best for different instruments. What do they add? What do they take away? Do they sound better when they are applying large amounts of gain reduction all the time or just a few dB here and there?

And don’t worry if all you have is one compressor to try. That’s always a good place to start. I’ve been working with audio for 25 years now, and I didn’t learn about all the different flavors of compression in one sitting. I started with the basics using one compressor, and I believe you’re always better off starting with one compressor, mastering it, and then trying another. Plus, while I personally like a variety of different compressors, one of my favorite mix engineers, Andy Wallace, is known for relying primarily on a single type of compressor for everything he does.

I’ll be back soon with another technique you can use to help understand compressors.