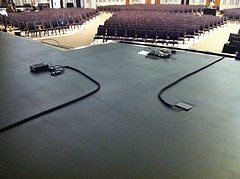 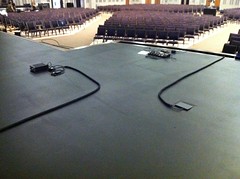 The stage in our west auditorium has historically been the most challenging for me to deal with. This is probably because it gets more use outside of Sunday morning than our other room. It can be tough because the floor boxes for mic lines and outlets for power are often in different locations, and the stage quickly becomes a mess of power and signal lines. We’re working on straightening a lot of the infrastructure end of this out, but in the meantime the stage can easily become a mess. So in an effort to simplify things a bit for myself and everyone else who uses the room, I put together some very basic snakes this week.

The idea really came from our guitar sleds we’ve been using in our east auditorium for the last year. Each guitar/bass player has a sled in their position that they can set their pedals on. The sleds are then connected to our risers via a snake that contains signal lines and power. These sleds are on casters and allow us a quick and relatively painless way to clear our entire stage when we’re done with music so that our communicators don’t have a big ol’ drumset right behind them.

The place the sleds really shine for me, though, is when it comes time to setup for rehearsal or an event. Typically all I need to do is roll the sled in place and change out a cable or two depending on if a musician will be opting for an amplifier or a large piece of plastic. We don’t need sleds in the west since we don’t need to clear the stage, but I wanted the simplicity of having a snake with power and signal lines that myself or anyone else could easily place on stage where needed.

So this week I basically set about recreating the snake side of our sleds in the west. For power I picked up some electrical boxes, outlets, and a reel of electrical cord (I believe it was SJOOW) to make some quad boxes for power. I sprayed the boxes black and wired ’em up. In the past we’ve used extension cords and powerstrips, but I’ve never been a big fan. Powerstrips never want to lie flat and extension cords always have weird kinks that never seem to go away. The new quad boxes blend nicely into our new black stage, and the cables lie flat and coil neatly. 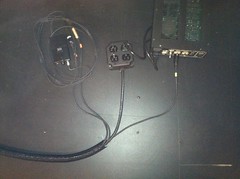 Then I took my new power cable and a mic cable from our inventory and loomed them with Techflex to complete the snake. I used the F6 type of Techflex which is self-wrapping so I can easily remove or add additional cables to the snakes. The photo here shows the snake for a bass player containing power, a signal line, and two additional lines for a hardwired IEM pack.

Some folks were asking on Twitter if running power with the signal lines would be a problem. In all honesty, we’ve had cables setup like this on our east stage for a year without any issues. Plus, when we run single lines on the stage, they’re usually running closely together so this isn’t really any different; the cables are just covered by the Techflex now. But if there are any issues, I’ll make sure and update the post.

Having these snakes will make setup much simpler on the stage. Plus they also make the stage look a lot cleaner because there is a single run to each position instead of a visible bundle of cables. If you’re running cables all over your stage, I highly recommend you look at investing in some Techflex to manage some your cables.

7 Responses to “Cleaning Up”