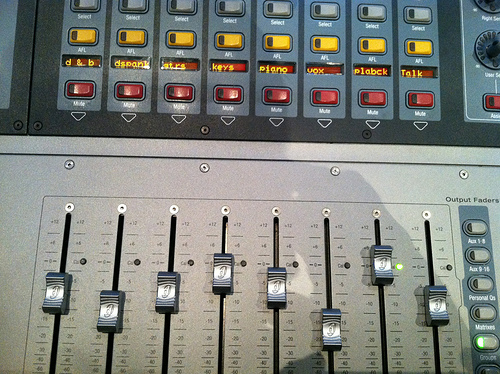 As a musician, the way I look at my role is that the console is my instrument and I play the band. It’s not a static thing for me at all. I don’t do anything by the numbers. Everything is done by feel and by ear.
– David Morgan

Thanks again to everyone who came to our breakouts at Gurus East in Louisville this month. It’s always hard to cover a lot of ground in the limited time of a breakout, but at any rate I hope there was helpful content for those who attended. Unfortunately, I wasn’t able to record the breakouts, but don’t worry because I think there will be opportunities in the future to sit in on something similar.

Today I want to kind of piggyback off of something we talked about in our first breakout at Guru’s using a practical example of a recent Sunday service I mixed. For those who couldn’t make it to Guru’s East, one of the things we talked about was configuring the console so that you can approach the mix from a musical standpoint and not have to worry about technical things like bussing or finding things. Something I talked about is how I want to ultimately gain total control of the mix from as few faders as possible. In order to do this I like to make use of some grouping concepts revolving around the use of subgroups and VCA’s that I’m going to get into today.

Subgroups or Groups are typically output busses that can be used for processing and managing a collection of different inputs. Groups are actual signal paths that inputs may be routed to and through. You can think of a group as a pipe with a funnel at the top funneling any selected inputs into the pipe. Within that pipe the inputs can all be processed together and the flow or output level of the combined signal can be controlled.

VCA’s, sometimes called DCA’s on some consoles, are basically remote faders. Multiple inputs and/or output faders can be assigned to a VCA so that the VCA will control their relative fader levels. For example, let’s say I have ten mics on a drum kit. I can assign all those drum faders to a VCA. Then once I have a blend of the kit, I can control the entire kit with ONE fader via the VCA. 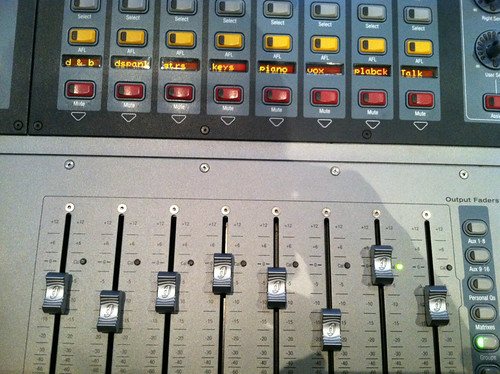 I like to use my Groups to combine similar instruments together. As you can see here I have a couple groups for my rhythm section (drums and bass), guitars, and keyboards–you can click any of these pictures for larger versions. Each of these Groups is basically a submix of those specific instruments.

In addition you’ll notice I also have a few more groups in use. The “Vox” group is something I use for parallel compression of all of my vocals. The Talk group is for spoken word microphones and the Playback group is for things like videos and pre-service music. You’ll notice there was also a Piano group this week that I’ll explain in my next post.

I primarily group instruments together so I can easily blend and process similar instruments together. The Groups then provide a quick way to balance different instrument types against each other. When I approach a large input mix, one of my goals is to simplify and condense things as much as possible whenever I can while still maintaining the control I ultimately want over the mix. So in terms of my mix process, I start with the input faders and get balances on those. As I refine the mix, my Groups are the next step where I can adjust my grouped balances against each other if necessary.

The ability to process a Group is another advantage I enjoy. For example, lately I’ve been using the Waves Kramer Master Tape plugin on my guitar group. This gives the guitars a bit of tape mojo, but it also works as a bit of EQ to give the guitars a little bump in the midrange and to roll off some of the higher frequencies that I know I won’t want on the guitars. Sometimes I might also slap a separate EQ across this group so that if all my guitars are fighting the vocals, in the heat of the moment I can just fix my group of guitars instead of getting bogged down in fixing multiple inputs. Processing Groups instead of individual inputs can also help make gear and/or DSP go a lot further in limited situations we all come across.

While my Groups are for groups of instruments, I primarily use VCA’s for controlling individual instruments/players. For example, our keyboard riser typically has two keyboards plus a B3 amounting to 7 channels of inputs. I’ll assign all those inputs to one VCA so no matter which keyboard our keyboardist is playing, I can still control his level in the mix. Similarly, each guitarist probably has a couple of mics on his amp or multiple inputs off an amp simulator. Assigning those inputs to a single VCA lets me control everything without having to try and manipulate multiple inputs at once. This is especially nice in a multi-mic situation because if I’m blending those mics, a VCA will maintain the relative level between the mics so I can turn the entire blend up or down.

So going back to my mix process, I start with input faders, then tweak the Group levels, and finally drive the actual event/show/service from VCA’s. In the middle of mixing the actual event, I seldom touch an input fader and rarely ever adjust a Group fader. Most everything happens in VCA world with the exception of my vocals. 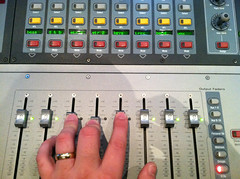 Pictured here is my standard VCA assignment I use 99% of the time: bass, d & b (drums and bass), gtr 1 (house left guitarist), gtr 2 (house right guitarist), keys, trax, band, and vocals. As pictured, my left hand sits on the two guitars and keys for the majority of the music sets we do week to week. An advantage of using a consistent setup here is I am pretty good about instinctively knowing what each fader is so I rarely need to look to see what my fingers are on.

For most things I’m pushing guitars and keys for the dynamics of the songs and to highlight things. My drum/bass VCA is there in case they get amped up when people get in the room and also to highlight some specific fills. I keep the separate Bass VCA in case his level gets out of line with the drums.

Now, I don’t do a kick/bass VCA like some guys do because to me the kick is a part of the entire drum kit. I like to balance the whole kit first and then get the bass working with the kit. Lots of engineers often describe kick and bass as one instrument, and I’ve probably done this as well. However, those same engineers will then turn around and tell you to think of the entire drum kit as a single instrument. So logically to me that means that the entire drum kit and bass guitar are really one instrument. So I balance the instrument via input faders. Then my groups give me the ability to do some parallel compression. Finally, the drum & bass VCA gives me control of the instrument while I’m mixing for people in the room.

My Band and Vox VCA’s are there to give me a quick way to adjust the balance of the entire band against all the vocals, but truthfully, I don’t use these much in the context of a song. I know some guys like to use these to alter dynamics of things, but, personally, I don’t typically like pulling back the entire band within a song. I much prefer to pull back specific instrumentation like the guitars or the keys to open things up and enhance dynamics because I believe within the context of the style of music I’m usually mixing these days, the rhythm section needs to stay pretty consistent. These two VCA’s shine the most for me when transitioning between elements. 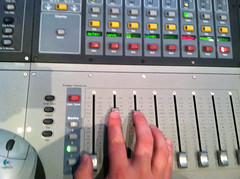 So when I get into mixing a music set, my left hand sits on the VCA’s controlling the band(as pictured above) and my right hand sits on the vocal inputs as pictured here. This gives me probably 95% of the control I want when I’m mixing. Everything is also close at hand and no matter what the band configuration inputs might be. Using my consistent setup also makes it easy for me to intuitively mix which in turn helps with consistency week in and week out.

Next up I’ll look at a situation where I needed to change things up that actually happened within the same service I took these pictures from.