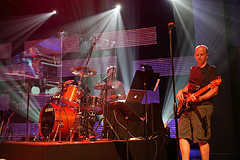 About That Bass & Kick…. 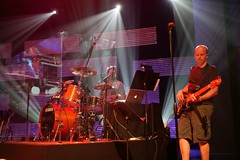 The bass and kick relationship is one of those topics that always seems to get audio dorks rambling on and on.

So I’ll admit I think some of the ideas that get tossed around sort of help at times; I often still do a sidechain compressor thing on the bass to give the kick drum more punch, but my guess is that’s not working the way you think it is. More on that in a bit.

You see, no matter how many techniques people throw out on treating the bass and kick, they all seem to overlook what is in my opinion the single most important factor: How the kick and bass are actually playing together.

Now, I’m not talking engineer-speak in how they play together within the mix. I’m talking about actually playing as in what and when are the two instruments playing. Basically, do the drummer and the bass player play notes(yes, the kick drum is a note) at the same time, or are they in their own little worlds just randomly plodding away? Is the drummer playing some ever-changing seemingly random kick pattern or does he have a solid groove that another person can actually follow along with? Is the bass player doing crazy runs or does he have a solid bassline that another person can follow along with?

Seriously, this is it. This is the Holy grail of a tight kick and bass relationship. They have to play together. The bass plays a note and the kick drum accents it which then gives that note more punch. You want an example? Go listen to the first :30 or so of Woman in Chains by Tears for Fears.

Notice how the kick drum accents the bass notes. It’s like an exclamation mark on those two notes. Here’s another one, Morph the Cat by Donald Fagen:

Again, the kicks are primarily accents on the bass part. Notice how much deeper and lower the bass guitar goes compared to the kick drum. It could be easy to mistake the kick drum for being much lower than it actually is here.

Here’s one more. Soul to Squeeze by the Red Hot Chili Peppers:

So we’ve got Flea on bass and Chad Smith on drums. The Chili Peppers are a good band to look at for this sort of thing because Flea is a melodic bass player so his parts are typically busier, but notice how just about all of Chad Smith’s kick hit right on with Flea’s playing especially at the end of the phrase Flea is playing.

OK, one last one because Bernard Edwards was a monster bass player:

Again, notice how the kicks land on bass notes.

So my point is, the first step in getting a tight kick and bass relationship is there actually needs to be a relationship. The musicians need to play together.

I know. I know. This is a shocking concept. But the fact is, if the two players on stage can’t lock together and play in time, all bets are off. And when I say lock together, I mean lock together. In time. Together. Playing at the same time. A little bit of drift in the parts timing means they will not be tight and not be together. If you want a tight bass/kick relationship, this is the first thing you need to get in order. And, believe it or not, not all drummers and bass players understand this. It’s not commonsense knowledge that the two instruments are supposed to play together, and I feel very secure in saying that because I’ve mixed a fair share of guys over the years who don’t get this. So, you might need to have a helpful, polite, constructive conversation because it’s surprising how often I have seen this overlooked even by professional musicians.

Once there’s a good working relationship, you can start looking at all the engineering techniques EQ’ing and side-chaining and compressing and EQ’ing and you get the point. And speaking of side-chaining things, part of why I often side-chain the bass is to help give the impression that the relationship is tighter. By ducking the bass a bit when the kick hits, I get the punch/accent of the kick which then releases the bass guitar to help glue the two together. So, in some ways, this is actually there to help when the two players aren’t quite as together as I’d like, although, it also comes in handy at times when the players are together.

So, let me leave you with a couple more things to think about in regards to this whole kick/bass thing. Part of the problem I see with kick and bass from an engineering standpoint is there is a predominant attitude/approach to work on instruments as if they are separate entities when in actuality they need to be musically together.

Well, let’s take the kick drum. There is a fetish among live engineers to have this huge, big-bottomed kick drummageddon cannon that can help security keep the throngs of fans back from knocking over the barricade at the front of the stage. You’re probably familiar with this kick drum. It’s the kick drum you can hear two towns over from some shows. I get it, though. It’s cool, and just about everyone wants to be cool. But it’s not necessarily always musical.

When I listen to the examples I posted here, the kick drums all have a certain amount of low frequency content that gives it fullness, but what sticks out to me and is often missed is the upper frequency content of the drum. In some of these examples, the bass guitar is actually providing the lowest frequency content of the mix, but it’s the upper-mids of the kick drum that gives the combined kick/bass note an edge that pops it out for our ears. The kick actually gives some of these bass parts more clarity and definition because of the transient.

And speaking of transients, did you notice how brief they are? The accents pop in and are gone just like that.

Here’s the thing about low frequencies. They have long wavelengths so think distance here. When it comes to sound distance is time. So, in order to perceive low frequencies, our ears need them to hang out longer than say higher frequencies with shorter wavelengths. And in a lot of live situations, low frequencies that overstay their welcome tend to muddy up the mix.

Soooooooo, where does this leave us?

Hopefully, it’s obvious you don’t want a thin and overly-clicky sounding kick drum, but it also needs to play together with the bass guitar. So when you’re working on the engineering side of the kick/bass equation, try not to fall into the stereotypical FOH engineer trap of chasing the enormageddon kick drum that doesn’t serve the rest of the band in any musical fashion. You might need to contour the low end of the kick drum to better support the bass guitar through EQ and dynamic manipulation.

Remember, whatever we do as engineers needs to be in support of existing musical relationships. Like all instruments, great sounding kick and bass begin with the musicians.