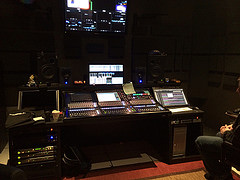 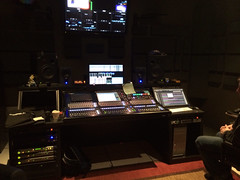 Last week on Church Tech Weekly we talked about different ways of handling broadcast mixes and getting mixes from FOH working outside the room. There was a lot of good discussion that primarily centered on broadcasting a FOH mix. I was a little disappointed about afterwards because I never ended up circling back to talk about why we have and prefer using a separate broadcast mix for North Point Online. I think a FOH mix can be made to work, and this was hopefully evident from our discussion on the show. Today I want to talk a little about why I think having a dedicated broadcast mix can ultimately be a better solution.

First, I should mention there are at least a couple prerequisites to making this work. For starters, you need to have the right personnel. Mixing for live broadcast is not the same as mixing in a live room, and it’s also not the same as mixing in the studio. Mixing for live broadcast is a mix of both disciplines so you need the attention to detail of a studio engineer backed by the speed and responsiveness of a FOH engineer. I’m not saying live engineers lack attention to detail, I just know I’ve seen a lot of live sound engineers get discouraged trying to mix for broadcast because they become overwhelmed with the detail a studio offers up that a performance venue can cover over. I’ve also seen studio guys get discouraged because they simply can’t work fast enough to keep up with everything that’s happening.

Aside from personnel, there is also an equipment requirement. In my opinion, broadcast audio world needs all the processing of a typical FOH setup and sometimes a little bit more. Personally, I use more effects when mixing in our broadcast studio because I don’t have the same natural effects of the room; room mics definitely help, but it’s not the same. There can also be additional console requirements in broadcast mixing such as the need to create a mix minus(es), although in our current application we haven’t had a big need for this, yet. I guess my point is, setting up a dedicated broadcast mix requires an investment at least on par with a FOH setup but probably with additional potential costs such as good control room monitors and room treatment for the studio. The other side of this, though, is a broadcast mixing studio can get some use during the week for things like audio post-production for podcasts, videos, etc.

Out of these two prerequisites, I think the biggest obstacle is typically on the personnel side. Personally, I would invest in a great FOH engineer first because finding someone to mix broadcast can be more challenging.

Now that that’s out of the way, why do I think that a dedicated broadcast mix is the best solution? Personally, I believe a dedicated mix is always potentially better. FOH, Monitors, and Broadcast are three completely different contexts to mix for. When you have different contexts to mix for, a one-size-fits-all approach is rarely the best solution in my opinion. Something is always compromised in a one-size-fits-all approach.

There are some potential downsides with using a FOH mix for broadcast. For starters, a FOH mix is typically a little exaggerated. Vocals tend to be a little louder and mix moves such as pushing instrument solos and effects are often exaggerated. Broadcast mixes, on the other hand, generally require much more subtle moves, in my opinion.

So why does this happen?

Theatre actors are trained to exaggerate their moves and expressions on stage to communicate to the back row of the room, however, sometimes when they try and transition their careers to film or TV they run into problems because when you put a camera up close on something already exaggerated it becomes over-exaggerated. The same is somewhat true of mixing. I think FOH engineers naturally exaggerate things for the space they’re in; I know I do. It works in that environment because the mix should reflect the size and scale of the room. However, when that mix moves into a smaller, more controlled listening environment, those moves can become much more obvious.

FOH mixes can also be problematic because they are sometimes missing things. One reason for this is because a live room is much more forgiving than a controlled environment. Performance venue acoustics and higher listening levels can smear things quite a bit so details are lost. This can result in less finessing of the mix.

FOH mixes might also be missing things because engineers are protecting their talent on stage and/or the listeners in the room. When you have a bunch of people spread across a stage, it’s a lot easier to hide someone having a bad day in the mix because a listener’s attention in a live room is more easily drawn towards what they are actually hearing. So if there’s a background singer struggling with pitch or a singer who probably shouldn’t have a guitar in their hand, it’s easier to hide those things in the mix because attention can be directed elsewhere.

When you move to a mix for picture, the picture automatically dictates where a viewer’s attention is directed. In some instances, the picture actually helps make some things easier to hear, however, when there isn’t enough of a correlation between what is seen and heard it can be a disconnect for the viewer.

A dedicated broadcast engineer can drive the mix to match the picture much more closely. At a minimum he can have a conversation with the video director about massaging the picture cut to match the music a little closer. For example, “Can you please avoid taking closeups of the acoustic guitar? He can’t really play it well, and it doesn’t sound good.” A FOH engineer probably won’t even be paying attention to this sort of thing.

Now, I realize this doesn’t paint the best picture for using a FOH mix for broadcast, but hopefully you understand that a FOH mix isn’t the end of the world when used for broadcast. It can definitely be made to work; just check out Church on the Move’s services if you want an example.

What I’m talking about here is ultimately what I consider to be the ideal situation. In my opinion, a dedicated mix engineer for something is always the ideal situation. Big tours all have a monitor engineer and many utilize more than one. Major motion pictures are typically mixed by multiple re-recording engineers where each engineer often handles a different element such as music, dialogue, and/or effects. TV Award shows typically employ multiple engineers for the broadcast sometimes using multiple engineers just to handle the different music acts along with another engineer to manage the stems of the different elements coming together. I remember reading a few years back that the Grammy Awards had a dedicated truck just for mixing all the audience mix. Seriously. One entire truck for ONLY the audience mics.

The production world is often a series of compromises, and the challenge for production leadership is in deciding where those compromises are best made. Can you mix monitors from FOH? Absolutely. Can you use a FOH mix for an outside broadcast? Definitely. Are these the best ways of doing things? That’s debatable, and I would argue they are not. So you just have to decide, given your current goals, what you think the best approach is in your world.

Let me leave you with one last thing we skipped over in the podcast, though. This is something to consider in regards to broadcasting if you haven’t taken the plunge and started broadcasting your services.

Taking a mix out of a live room–whether a FOH mix or a dedicated broadcast mix–puts it and everything in it under a microscope. If you listen to your FOH board mixes on a regular basis, you’re probably already aware of this. The people who might not realize this, though, are the folks on stage.

Broadcasting adds an additional pressure to the talent on stage to be on top of their game. Just look at the performances on those big award shows where the biggest names in talent sometimes struggle with a basic performance skill called pitch.

The talent side, in my opinion, is the area where most people are least prepared to broadcast. You can spend all the money and resources in the world on production gear and personnel, but if the talent on stage isn’t up to snuff, that investment can easily seem like it was worthless and if you’re not careful, end up taking the blame.

The challenge with broadcasting online or on television is you are putting your program literally one click away from professionally produced material using onscreen professionals and created by professionals behind the scenes. What you are doing will be compared, and if you are trying to reach new people with your message who might be reluctant to tune-in in the first place, I think this is an important issue to consider. Although, in some cases, this might not be a big deal. You just have to decide how important the quality of your presentation is and make the best decisions for your chosen approach.

3 Responses to “Some Broadcast Mix Thoughts”