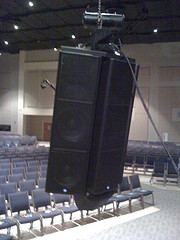 Year of the System: The Week – Tuesday 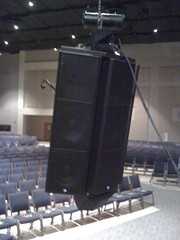 Tuesday got off to a good start. We were feeling pretty good since everything was ready to go back in the air. We took some time to clean up the disaster zone we had created of old components and shipping materials, and waited for the riggers to return to get the boxes back in the air. I also took some time in the morning to roll out and setup my tuning rig running long enough cables to get my measurement microphones into the far reaches of the system’s coverage.

The riggers showed up just before noon and had things going back up relatively quickly. Once the boxes were back in the air, Luke started rewiring them while I started rolling out all of my tuning gear so that I could immediately start testing the boxes once he finished a cluster. However, after he finished the first cluster a new challenge came into focus.

First a little backstory. Roughly a year and a half ago there was an issue with the Venue’s FOH rack that cropped up. It related to a power issue on the motherboard, and the solution was to use a series of chemicals to clean the contacts on the power connectors. The fix was recommended for all consoles at the time, but unfortunately it wasn’t a permanent fix and would be something that would need to be repeated as part of ongoing preventative maintenance on probably an annual basis.

About a week prior to the speaker refurb, I started getting the error messages again. The nature of the problem is that over time more and more error messages happen which can get you closer and closer to an actual failure. After a quick email with Digi’s amazing customer service I decided I really needed to apply the fix sooner than later especially in a week when the console was going to get used more than during a typical week.

On a side-note, I really have to give shoutouts to the great customer service we received during the week from the folks at Clark ProMedia, Renkus Heinz, and Digidesign. No matter how confused or frustrated things got, these companies never stopped being an enormous help whenever and wherever they could. Customer service is HUGE for me and something that factors more and more heavily for me when it comes to investing in equipment. Now back to the story.

When I opened up the FOH rack to service it, things suddenly seemed a bit more urgent. Upon examination I discovered that the connector on the power supply appeared to have cooked around one of the pins. On another side note, I’m very thankful that I switched to an iPhone because it was so easy for me to take a quick picture and email it to Digi’s customer service to get their take. It looked bad to me, but I honestly wasn’t sure if it was a genuine problem or simply a natural side effect of the servicing from the year before. Digi’s immediate response confirmed my suspicions, and they got the ball rolling on a solution: replace the CPU assembly. It would be another day before I could truly fix the Venue so I put it back together and got it up and running because I still had work to do even though I only had about 90 minutes left for the day.

With the console running again, I set out to finish testing the boxes in the air which revealed that one of the boxes had the lows wired out of polarity. A quick trip to the amp room to flip the wiring on the back of the amp resolved that.

At this point I was really starting to run out of time, and I still needed to get the mains ballparked before I left; did I mention that I needed things running for an event at 9:30 Wednesday morning? My investment earlier in the year on building a new measurement rig for system optimization came in very handy along with my switch over to EASRA SysTune from Smaart for large scale optimization projects. I like SysTune because it allows the use of multiple mics that can be flipped simultaneously within the software and even averaged together live. Some guys actually have mic switchers set up so they can do this in Smaart, but it’s still easier for me to do within SysTune plus the live averaging of multiple mics is a cool and handy feature. For what it’s worth, I still use Smaart a lot, too–maybe another post on that someday….

So I threw all my mics out, got the delay times set in SysTune, roughed in the system EQ, walked the room a bit to where I was satisfied for the next morning, and still somehow finished in time to pickup my kids.

On Wednesday, the adventure continued….

Here’s a good book to read before facing weeks like this:

One Response to “Year of the System: The Week – Tuesday”

TweetShare
If you enjoyed reading this post, please share it!
Year of the System: The Week – Tuesday