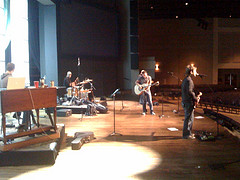 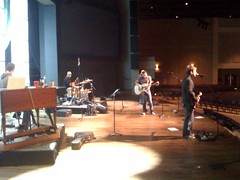 I had an interesting realization last week. I was sitting in my car at Sonic eating lunch and listening to my board mix from rehearsal the day before. I was listening to the band thinking about how blessed I am to get to work with the guys I get to work with, but I wasn’t thinking in terms of music. You see, I don’t work with singers, drummers, keyboardists and guitarists on stage. I work with folks named Todd and Danny and Reid and Scott and Pat and Matt and Ryan and Chrystina and Seth and Chris and Richard and Karyn and on and on and on and on. They’re not players. They’re people.

Now I’ve been a Springsteen fan for just about as long as I’ve been tinkering with this thing called audio. In high school I was a bit over the top on this and ended up reading a lot of interviews and articles on the Boss. As a result, Springsteen had a pretty big influence on what I do and how I approach things. Something I read a long time ago that I still hold on to is how he approaches his shows. He used to say in interviews that every night there was at least one kid in the house who had saved and saved and saved for this one show, and this one show would be the only concert that kid would see that year. So Bruce makes sure that he and his band give that kid the show of his life. This isn’t so far off from what I do every week.

Every Sunday there is probably someone in the room who is there for the first time. Maybe they followed the crazy traffic. Maybe a friend of theirs has been inviting them for a long time. Whatever it is that motivated them to be in the room, my reality is this could be the only time what I do might have an impact on that person. So I try and do everything I can to make sure the audio experience will be impactful. Of course, keeping this up every week isn’t always easy.

As I was listening to the board mix and thinking about things I wanted to pull out in the mix when the lights go down, for some reason I started thinking about “why” I wanted the night we were rehearsing for to rock. It had nothing to do with the people coming. I started thinking about it, and it hit me that I wanted it to sound great for a very simple reason: because I want these people that I care about to sound great when they are on stage. It struck me that if you care about the people who are on stage, you will do whatever you can so they come across in the best way possible to whoever is listening. It doesn’t matter if the room is full or there’s one other person there, you make them sound great because you care about them. Sitting there eating lunch it hit me that maybe this might be a more powerful motivating factor than the Bruce Springsteen Work Ethic and combining the two could be quite potent.

So maybe this weekend or next weekend or whenever you sit behind a console again, don’t mix just because you’re trying to do a good job. Mix because you care. And if you don’t care right now, maybe think about how much easier it would be to do what you do if you did know those folks on the platform and did care. Maybe think about just saying “hello” or “how’s it going?” or “that little thing you’re doing in the chorus is cool” and see where things go. Maybe follow the example of my associate audio director and carry a box of bottled water out on stage and pass it out to everybody. It’s one thing to push faders for strangers. It’s something else when you’re GIVING it all for someone you care about.

2 Responses to “When Relationships Meet the Bruce Springsteen Work Ethic”

TweetShare
If you enjoyed reading this post, please share it!
When Relationships Meet the Bruce Springsteen Work Ethic