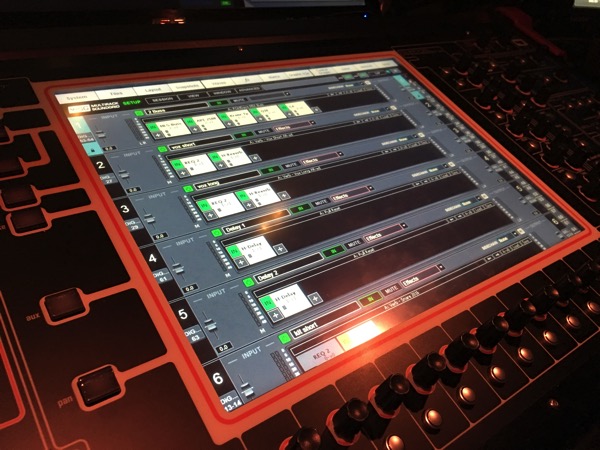 Time for the next installment looking at the places where my signal processing gets a little more complicated than usual. Today’s instrument is the snare drum.

The snare drum isn’t really an instrument in the usual sense since it’s part of an instrument: the drums. The snare is important to me in different ways, though. I believe the backbeat is a critical ingredient in modern music. I’ve heard other engineers argue for the importance of other drums over the snare drum, but until the majority of the world is listening on full frequency playback systems, I believe the backbeat will reign and the backbeat is typically held down by the snare.

The snare can be a little trickier to me than you’d think because the snare drum of modern recordings is usually not exactly the sound of an actual snare drum. They often come from the judicious use of processing and layering/replacing with samples. The thing about this, though, is while the snare may not be real, it’s still generally supposed to feel real in the mix to the casual listener.

In addition to the sound of the snare, I’m also trying to make it do something in the mix. For me it needs to drive the music in a certain way so I can get pretty particular about what it’s doing in terms of things like tone, length, and impact. This isn’t a cookie cutter kind of thing for me, either. Just about every drummer I work with has a different snare than the last so how much of this processing chain I use is constantly in flux. Sometimes it can be pretty simple, but usually there are more than a few ingredients doing a little bit to it.

1. EQ
This is my primary EQ for the snare. While my first priority is usually to clean up some mids or low-mids, I also boost a bit of the good stuff here. What’s the good stuff? Generally it’s some top for the crack and a little bottom for the meat and body of the drum. For the most part this EQ is compensating for the fact that a microphone is only a couple inches away from an instrument that was never intended to be listened to that close.

1. Saturation
When I was an intern, I still remember the reaction I got afer informing my boss that the clip light was showing on the snare track on the 2″ machine: The redder, the better.

There is something about a little bit of light distortion aka saturation on a snare drum that I usually like, and it’s also something we are very familiar with hearing because it has been a part of a large portion of recordings of the last 40-50+ years whether the engineer intended it or not. What it actually does depends on who you ask. Some might describe it as warmth. Others might call it weight. Sometimes it’s length. To me it’s usually just better.

These days I’m usually using Waves NLS on the Mike console to achieve this. The thing I noticed over the years is I prefer odd harmonics with a strong 3rd for this, which not so coincidentally is typically what tape saturation provides. The Mike console on NLS also does this. Before NLS I used to use the Cranesong Phoenix quite a bit on the Radiant setting.

As much as I appreciate saturation, I should mention an important point about getting happy with it and the rest of my chain. As I add different layers of processing, there can be a push-pull between the snare’s transient and the rest of its goodness. In this case, saturation/distortion can soften the transient. So it’s all about finding the right balance between the goodness the processing adds while maintaining the right impact.

I should also mention I go back and forth on where I add saturation in the chain. Most of the time it’s the first thing I do after the console EQ, but in some cases it’s the last thing in the chain. If you’re wondering where YOU should put saturation, the thing to think about is where/when in your chain do you want to add harmonic content.

2. Compression
This isn’t a rule for me, but I can’t remember the last time I didn’t use a little compression at this stage. My current favorite for this and for the last few years has been the Waves BSS DPR-402. I’ve also used the Waves dbx-160 and the CLA-76 quite a bit. The compressor in the SSL channel plug-ins is also quite good for drums, and the channel compressor on the S6L sometimes gets a similar result for me.

I don’t work this compressor very hard, though. I’m probably hitting maybe one or two lights of gain reduction on the BSS. It’s just a little something something because I know I’m also going to do a bunch of parallel compression along with some buss compression, and those all contribute to the final sound I’m getting. This particular compressor adds a little bit more impact and excitement for me.

At this point my signal chain gets a little fluid, but next up is typically another EQ of a modeled vintage variety. Most of the time I use the Scheps 73 plug-in, but I have also used the V-EQ4 and occasionally a Pultec emulation as well.

I use this mainly to make the snare a little brighter and sometimes weightier within the context of the mix so I’m usually not touching this when I’m initially dialing in the snare. If I get the mix up and going and the snare isn’t quite bright enough or needs a little more of the fundamental, I’ll hit rely on this EQ to boost a little at 12k and sometimes at 220.

Another thing I do with the Scheps 73 on occasion is hit the LINK I/O button, and then I’ll jam the input all the way up to add more saturation. If the LINK I/O is turned on, it will automatically turn the output down to compensate.

I don’t do this much and sometimes it happens before that last EQ, but it’s not a rule. Again, this goes back to the push/pull thing I have with compression and saturation trying to make the snare hit just right. My current go-to for this is Smack Attack, but I have used Trans X in the past as well. The SPL Transient Designer was also something I used to do this.

If I’m being completely honest, I usually only use this when I’m working with a lousy or mediocre drummer. It’s not about fixing their playing, though, because the fix for bad playing is to find someone who can play. However, sometimes this can help me get through the day.

This one is Robert Scovill’s doing as he got me hooked on this. There isn’t one specific processor I use, but they are all used to just try and get a little more meat out of the drum. You might hear what I’m doing with this and call it fatter or weightier. I call it meat.

I started doing this with the Aphex Big Bottom. Then I went to the MoogerFooger Low Pass. These days I usually use Waves R-Bass. I usually have the frequency set around 90-100, the original bass “In”, and the Intensity all the way down to start. Then I just feather the Intensity up until I like what I hear.

I think some engineers are starting to use the Waves Torque plug-in for the same kind of purpose, but it’s not quite the same as what I’m doing because Torque is a pitch shifting plug-in. Re-tuning the drum can get you a similar thing, but what I’m doing is trying to bring out what’s already there because most of the drummers I work with have set their snare drum set up very intentionally.

So what have you been liking on your snare drum these days?