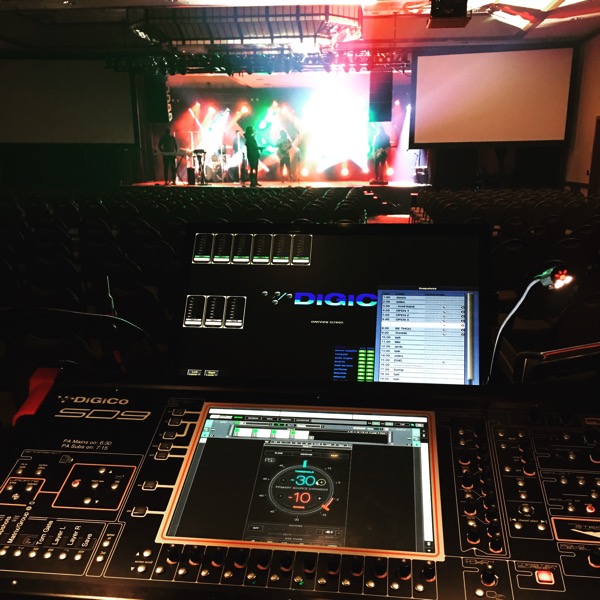 It’s no secret I’m a big fan of using plug-ins for live sound. When the VENUE made this possible, it was natural for me since I had been using plug-ins in the studio environment for several years at that point. These days a lot of what I do with plug-ins has moved over to Waves Multirack as I’ve been encountering more Digico’s.

While I do like my plug-ins, I don’t actually use as many as you may think. In a lot of cases when I’m at a new gig, the first thing I end up doing is turning a lot of stuff off that the last guy was using. The vast majority of processing I do on things is pretty simple consisting of EQ and compression, and most of that happens right on the channel strip. If there’s an exception to that it’s most often compression where I’ll opt for a different flavor than what’s on the console. So you’d probably find a lot of racks if you looked at one of my Multirack setups, but each rack wouldn’t have much in it besides a compressor and maybe some kind of harmonic/saturation thing.

Of course, there are places where things can get more complicated, and today I want to start looking at when, where, and–most importantly–why my processing may get more complicated. My hope is maybe this will inspire you to try things and to also think a little more about exactly why you do things the way you do.

Vocals are a challenge because they’re typically the focus of a song, and they tend to be very dynamic in several aspects. So let’s look at the typical signal chains I’m using on vocals these days.

1. EQ & HPF
I use these for basic clean-up and mic correction. I roll off the lows with a high-pass filter to keep the vocal out of the subs and to eliminate rumble and handling noise. Then I get rid of any garbage which usually amounts to pulling out a bit of lows and a bunch of low-mids. Sometimes I’ll also take something out of the upper-mids, but this is pretty rare for me if the rig is in good shape.

1. Pitch Correction (as needed)
I think I have a higher tolerance for less-than-perfect pitch than many people, but if a vocalist is having a really bad day I’ll give them some help. Now, I get that there’s a bit of a philosophical argument here, and in my staff days I was very much more opposed to this. However, as a hired gun right now, my job is to make the performers on stage sound the best that they possibly can, and I’ve come around to a point where I’m not afraid to tune them if I need to.

I mostly do this with Waves Tune Real-Time, and one thing I’ll mention is sometimes I prefer Chromatic mode to setting a specific key especially if I’m working with a mostly strong singer. That said, I can’t remember the last time I used this.

2. Limiting (as needed)
This is rare for me to do, but some vocalists can get kind of shouty in spots with sudden peaks. If my compressor isn’t stopping these to my liking, I’ll employ some kind of limiter. Sometimes I use a compressor like a CLA-76 with a fast attack and release. This is another one of those things, though, that I can’t remember the last time I did it.

3. Compression & “Gating”
I think a lot of church engineers would be astonished to see how much compression was probably used on the vocals on their favorite records. So to my ears, modern vocals simply sound wrong without compression. I find it hard to get away with modern recording amounts of vocal compression, but to my ears they always need some control. Waves MaxxVolume is still my go-to for this with R-Vox being a close second. Aside from their sound, part of my love for these stem from the simple controls along with the built-in gate.

When I “gate” a vocal, I don’t hard gate it. However, a little bit of attenuation from an expander/gate can be helpful for a couple of reasons. First, it can help clean up bleed into the microphone when the vocalist isn’t singing. Second, it helps with problematic makeup gain as a result of compression.

For example, if I have a vocal that’s always getting 3-6 dB of gain reduction, that means I’m probably going to do some makeup gain. Feedback may not be an issue while the vocal is compressing, but the minute it releases I’ll get all of that makeup gain added to the original signal. It’s the equivalent of bypassing the compressor and pushing the fader up. Using the gate is like saying, “Hey, when he’s not singing or talking, how about you automatically pull the vocal back for me so I don’t have to think about it.” This is especially helpful when working with worship vocalists who like to talk when you least expect it.

4. De-Essing
I find sibilance is almost always an issue these days on modern PA’s. I also have yet to find an on-board console deesser that didn’t let me down so I nearly always rely on an outboard deesser. My favorite for this remains the Massey De:Esser, but it’s only available for first generation VENUE.

5. Dynamic EQ
One of the last puzzles for me to get control of are the tonal dynamics of the vocal, and my go-to for this is the Waves F6. Some of these dynamics come from the moving target of mic technique, and then some of it just comes down to variations that naturally happen with some voices as they sing higher or lower in their scale.

Some engineers like to do this earlier in the chain, however, I prefer it near the end. Since I’m just using this for final cleanup, I want the vocal more leveled out when it hits this because if the vocal isn’t hitting hard enough to do what I need it to, I may end up lowering thresholds too much so when the vocal starts hitting hard I end up with my dynamic EQ hitting too hard. Basically, I just feel that placing this at the end of the chain allows me to use this with a lighter touch.

6. Saturation
I don’t use this all the time, but I’m a fan of using a little bit of saturation on things. I’ve written about this in the past in more detail, but basically I believe it sometimes helps things sit and cut better in the mix. Waves NLS is a common plug-in I’ll use for this. Lately I’ve been using this at the end of the chain on vocals so that I’m only creating new harmonics based on information I want in the mix. In other words, I don’t want to add new harmonic content based on all the low-mid mud I’m going to pull out.

7. Additional Gating (as needed)
This is pretty rare for me right now, but in some situations on really loud stages with a lot of vocals I may want more gating than I can get out of my earlier dynamics processing. In these cases I’ll use either a Neve 5045 or the Waves PSE plugin.

My background vocal chain is a little bit simpler so I’ll just note some of the differences.

1. Pitch Correction (as needed)
I’m not as cautious if I implement this on backgrounds. I still don’t want to hear artifacts, but I don’t find they bother me as much here since these vocals are in the background.

2. Compression & Gating
I sometimes “gate” backgrounds a little harder because I’m not usually as worried about missing something.

3. De-Essing
I sometimes deess backgrounds a lot harder than lead vocals because one of the tell-tale signs of vocalists that are out time with each other are “esses” that all start and end at different times. So I let the leads have the “esses” and don’t worry about removing too much from the backgrounds unless it sounds really unnatural to me.

5. Additional Gating (as needed)
Backgrounds are more likely to get this than leads because, again, I’m not as worried about losing stuff. I’m not completely anti-bleed in mics, but if I feel like the bleed is negatively impacting the mix and I need to reduce it, I’m usually going to scrub the backgrounds a lot harder than the leads.

One thing I should probably say about all this is I don’t use these entire chains every time I mix. I like to start with everything off, and I just turn things on as I need them because I always want to make sure I’m making things better at every step. One of the BIG dangers in having more complex signal chains is you can end up slowly degrading your source a little bit at a time to the point where it’s very hard to dig yourself out later on. So it’s important for me to know exactly what each piece of the puzzle is doing, and I ensure that by starting with it all off.

So what’s your vocal chain looking like these days? What are you struggling with in regards to your vocals?