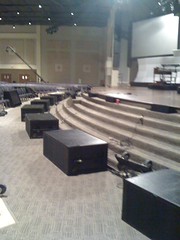 The biggest challenge I run into with this in live sound usually stems from the acoustics of the room. The reality is a large number of performance venues–and especially larger venues–have extended reverb times at low frequencies. In these rooms the acoustics of the room often have tilted reverb times where the room reverb in higher frequencies is shorter relative to lower frequencies. When our room adds reverb to our low end, it has a tendency to smear the low end which is the enemy of tight low end. This doesn’t mean we’re completely out of luck, but it does put a limit on how tight the low end can really be.

The next factor in controlling sustain is our subs. I learned from the great folks over at d&b a few years ago that they use extremely strong magnets in their subs because it helps them stop faster, and this allows for better transient response. d&b isn’t the only manufacturer making great subs, and I’m not suggesting you start putting in budget requests to swap out your subs, either. However, you need to keep in mind that this is another factor that will limit how tight you can get your low end in the room.

A third factor that trumps everything is, of course, your instruments and the players on stage. If our drummers and bass players aren’t locking together, the low end isn’t going to be tight. The instruments also need to be setup and tuned properly. A kick drum that resonates too long will not sound tight and punchy. This is part of why a lot of drummers put pillows or some other form of muffling in their kick drum. It’s also another reason why some bass players use some sort of a mute on their strings in the studio. For example, classic bass players like James Jamerson and Carol Kaye both used foam or felt mutes under their strings to control sustain. Our tight low end will only be as tight as the instruments allow.

So what can we do as engineers to control sustain?

We have a couple of ways of manipulating it through the use of our dynamics processors. First up would be a compressor. Compressors often increase sustain especially on something like a bass, but we can also use them to decrease the sustain a bit. This can be done by adjusting the attack of the compressor to emphasize the front-end transient of a sound. For example, if we slow the Attack on a kick drum to let the initial hit come through, the compressor will attenuate the sustain of the sound if we adjust and slow the Release to hold that attenuation down.

Another method that is often more effective is to use a Gate/Expander. By adjusting our Gate’s Release longer or shorter, we can effectively increase or decrease the sustain of the instrument. It’s not unusual for me to use a fairly short release on a kick drum in a highly reverberant space. You just need to be careful when you’re playing with sustain in the room because what works for the room might not work for say, a drummer’s in-ears.

One other method would be to use a Transient processor. I’m thinking of things along the lines of the SPL Transient Designer or Waves Smack Attack plug-in. These types of processors usually have a “Sustain” control which may be adjusted to increase or decrease the amount of sustain without the adverse effects compression and gating may sometimes introduce.

Aside from dynamics processing, something else we can do to help tighten up our low end is to make sure we clean up non-musical junk in the extreme lows. This could be from things like mic handling noise, vibrations through mic stands and the floor, and sometimes even the instruments themselves. I handle this with variable high-pass filters on inputs, and I’m not afraid to use them on things like bass guitars or kick drums, either. The key to adjusting these is you have to listen. I’ll slide the filter up until I start hearing good stuff disappear, and then I’ll lower the frequency a bit to get back to a natural sound. A 4 string bass has a low E fundamental around 40 Hz so the stuff below that isn’t typically going to be music. The same can be said for a kick drum with a fundamental around 50 Hz. Sometimes there is nice stuff below that, though, so be careful but don’t be afraid to try it.

Now, maybe a bigger question is how do you hear what’s really going on with your low end so you can really dial it in when you’re in a highly reverberant space? This is especially important if you’re doing streaming because the last thing you want is to set dynamics processing so it adversely affects those environments outside your room. My first suggestion would be to get some kind of virtual soundcheck setup going because it will be much easier to experiment when you’re not waiting on a band and a band isn’t waiting on your. Then you have a couple of options.

A final thing you should do is learn what your room and PA is capable of doing. A good way to go about this is to get some reference tracks with tight low end and start playing them in your PA. Listen to them over and over and over again to get familiar with what the room will do. Just keep in mind that a lot of rooms tighten up when they fill up with people, but if you get familiar with what it should be when it’s empty you can get things right in the pocket for when people fill it up.

What are your favorite techniques for getting tight low end? I’d love to hear about them in the comments.