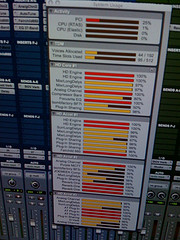 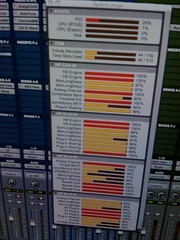 This post comes largely in response to Bill’s comments in the last photoblog on Mixing in the Box.

I spent a fair amount of time last week working on a mix for potential release on the upcoming series DVD for our series that concluded last weekend. We often try to close a series with a song that kind of wraps things up, and this week we had a brand new song written by Steve Fee and Eddie Kirkland. Occasionally those closing songs will also make it to DVD depending on all kinds of things such as the quality of the performance, ability to get a license for the song, and how well it fits with the series. I don’t really have anything to do with determining whether a song is going to DVD, but when I have time in my schedule I sometimes get to mix these.

I got started on Monday and then mixing throughout the week whenever I had an hour or two in between meetings and other weekly to-do’s. Most of Monday was spent organizing the session for mixing in Pro Tools 8. This was isolating the tracks for the song from each service and removing the stuff I wouldn’t need. We decided that the performance from our third service would serve as the master take for audio and video. I created a couple of alternate playlists for each track and sync’ed the other services to the master take on those playlists. The song was performed to a click with sequenced tracks so this essentially gave me three takes in case anything in the master needed help. Once everything was in I started playing through the song making sure all the tracks were OK, listening for anything that might need fixing, and dropping markers for each section of the song–verse, chorus, bridge, etc.

On Tuesday afternoon I got to start building the mix a bit, and I built it much in the same fashion I approach any mix. I start getting the drum sounds then move on to bass. After the bass is in I generally try and start pulling in the lead vocal because I like to get it in there as soon as I can. Once that’s all in I start pulling in the rest of the instrumentation generally starting with keyboards moving to guitars and then to whatever else. Once it’s all up I tend to bounce around a bunch working on different things and generally end up touching everything a bit. With everything’s in I really try not to make a lot of changes with instruments solo’ed so that everything that gets touched is in context of the mix. When I pull things up for the first time, I typically solo them and get them ballparked, but once they go into the mix I try and do everything in context.

My goal at this point is to really just get a baseline balance. I probably spend the most time in this phase working on choruses since everything is generally in the mix going full bore in those sections. Plus in any mainstream music released in the last 40-50 years, the chorus tends to be pretty important to the song so getting it right is pretty important in my book. I figure if I can get the chorus to work, the rest of the song will come together. However, if I save the chorus for last it can be a whole lot harder for me to dig things out. When I’m working on the baseline, I also try to mix in mono as much as possible. Our final product for DVD is stereo, but there are still enough mono TV’s out there and stereo TV’s that are set up improperly that I want things to work in mono. Mixing in stereo can also be too easy at times because you can pan everything around to make space and get things to fit. If it’s working in mono, things tend to just get better when I move to stereo. At this point I also generally try and bounce a reference mix to check in the car, but this week I didn’t probably because my time on the mix was spread out more than usual.

When the baseline is up I move on to automating the mix pulling things up and down for the song. Here I’ll find myself jumping around from section to section. Sometimes I work on one section, and sometimes I run them into each other. And then at times I’ll go through the whole thing start to finish. Sometimes I pick one instrument and work my way through the whole song. Sometimes I’ll touch multiple things at one time. I really try and approach it much the same way I would approach a live mix doing everything by hand with the automation there to simply do more than I could ever do if I was mixing live. The challenge here is to try and keep the entire mix in perspective while still focusing on individual things and tweaking them. It’s probably pretty obnoxious to be anywhere in proximity that you might hear what I’m doing because it’s a lot of bouncing around.

I try not to spend too much time on the automating/actual mixing side if I’m going to get a reference video at some point for the final DVD. I want the song to stand on its own, but the reality is that adding picture changes the game a bit. Sometimes there might be an instrument in the mix that plays better sitting farther back, however when you see it on the screen it feels like it needs to pop out a bit more so as soon as I get picture I’ll start doing all my rides to the picture. I received the first reference video Wednesday afternoon and immediately found that the cymbal crashes were getting lost along with the acoustic guitar. Another interesting challenge to this particular song was a featured string section. The strings play one of the hooks in the breaks, and serve as texture through the rest of the song. However, the video director from Sunday played them like they were a key element in the entire song so a challenge was balancing the visual acoustics of the mix against what would serve the song, and I wouldn’t be surprised if I get some requests to bump the strings a bit more before the final mix is delivered. We’ll see what everyone else sees..

Once I’m through automating, I get into the great back and forth. I’ll bounce a mix down and check it in my car and possibly my office. I’ll usually have a few notes from this that I’ll take back into the studio to make some quick changes. Then it’s time for another bounce. With every set of little tweaks, another several could be revealed so this could go through several iterations. I think I did 3 passes on this mix before I was ready to hand it off to the video guys so they could lay it back to picture. I could probably speed this process up if we had an FM modulator so I could sit in my car in the parking lot listening to the studio while VNC’ing in. I’m generally happy with the way stuff I mix in our studio translates, but the reality is I’ve listened to more music in my car over the last seven years than anywhere else so I REALLY know what things should sound like in there so anything I’m doing for product always gets a check in my car. And there’s nothing fancy in there, it’s a stock stereo just like most peoples’ cars.

By the way, I tend to keep things pretty basic on the audio side once I’m outside of work. The audio system in my little screening room at home is also pretty basic and just a Sony 5.1 in a box system I got for Christmas about 8 years ago. Some people are often surprised that my car and home setups aren’t these tricked out audiophile setups so here’s my thing. I get to listen to things on pretty good speakers all day at work so why should I spend my money on stuff that someone has already given me to use? Plus I think it’s very important for me to keep some real world setups in place to listen like most everyone else does. I actually listen to a lot of stuff right through my laptop speakers, and my iPod earphones are still stock. Truthfully, though, I would like to update my home system in my screening room at some point….but I digress…

On Thursday I delivered my final mix to our media guys to marry it with the video cut of the song. They put it all together and sent a demo out for evaluation. I’m finished, but I go into this knowing that there could and probably will be some tweaks to the mix that decision makers above me will request. By final I simply mean that I’m at a point where I’m not embarrassed to play it for anybody. I expect I’ll have a few minor tweaks to do this week if they decide to put the song on the DVD. And if it does get released, I’m sure you’ll hear about it here as well.

Found some old ADATs while digging in my attic. I

New addition to the studio.


Error: API requests are being delayed for this account. New posts will not be retrieved.

TweetShare
If you enjoyed reading this post, please share it!
This Won’t Explain the 3 Second Reverb Tail
We use cookies to ensure that we give you the best experience on our website. If you continue to use this site we will assume that you are happy with it.Ok