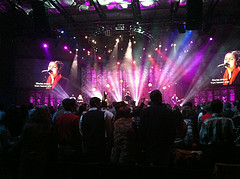 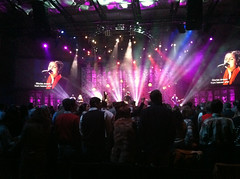 Our opener this year was kind of a two-part deal with a six minute video that transitioned right into a live song performed by the band. The song portion relied heavily on some really cool tracks put together by Jared Hamilton in our music department. Jared brought the tracks by the week before to hear how they sounded in the room. There was a lot going on that I knew would need to be mixed down to stems to fit on the video so I suggested he bring the finished tracks back the next week to mix down through the PA.

One of the challenges whenever we use tracks is that they are often mixed at studio volumes. If you’ve read any of my past posts on equal-loudness related challenges, you can probably guess that this doesn’t always translate quite right in the room. One of my hopes in mixing the tracks through the PA was I could get them closer to show volume and EQ them appropriately to avoid any of the potential harshness that can sometimes happen when studio tracks get played at show volume. I thought it might also help because I could start to get a better idea of what was going on with the different parts to see how they might best be organized into stems to give myself and our other mixers at the other campuses best gain control of them.

Our current setup allows us to have 8 audio channels. For the video these were essentially broken down into stereo perc/loops, stereo instrumentation (strings, keys, pads, etc.), stereo vocals, timecode, and click/counts. The timecode was available for our lighting folks and anyone else who might want to utilize it. Jared and I worked on the pre-mixes on the Monday before the services so that we would have things ready for rehearsals starting on Tuesday evening. After our other campuses’ Wednesday rehearsals, I implemented a few changes and handed the final stems over to our media department to layback onto the video. JJ Brummett, our studio engineer, did a final pass on all the audio tracks we were using to get all the levels in the same ballpark. I felt like the end result was a success. I wouldn’t mind doing more of this in the future. 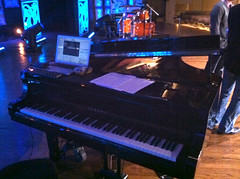 I have a love/hate relationship with acoustic pianos. A great piano, to me, sounds great when the lid is wide open and you are standing a couple feet away. Unfortunately, that’s not generally a good place to put a mic on a stage with a live drum kit and a raging PA. We’ve tried a lot of things over the years that have all typically led to a better and better sounding piano in the mix, but in the end the results were never quite as good as we hoped. Part of that is it’s simply challenging to mic an acoustic piano on a rock and roll stage, and the other part is our piano was just never the best sounding piano to begin with; remember, you need to start at the source. Plus keeping a piano in tune can be expensive and all the moving around we do with our instruments on stage was never kind to this.

Our music department talked over the years about trying some different things such as something along the lines of a Slam Grand, but this year they decided to install a midi-strip sensor in the piano. They went with the QRS PNOScan MIDI record strip which is an optical sensor that is installed beneath the piano keys. Our music department liked it because they could retain the weight and feel of a real piano keyboard, but maintain the flexibility of using any sounds they wanted. Additionally, they also installed a mute rail which mutes the piano strings within the piano. This helps in case the acoustic piano is not quite in tune so that our musicians don’t hear weirdness between their in-tune sounds and the out-of-tune acoustic source on stage.

I know there are piano purists out there who recoil in horror at this idea, and I empathize with them; as a guitarist I’m not a fan of guitar amp simulators. However, I think the benefits of going this way have so far outweighed the negatives of losing the authenticity of an acoustic piano on stage. It gives us a ton of flexibility in terms of staging, and the sounds are already better than we could achieve with our piano in its acoustic state. 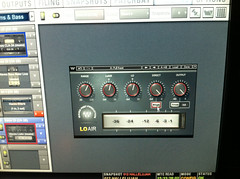 I added a new plugin to my collection this week: Waves LoAir. LoAir is a subharmonic synthesizer. Basically, you feed it a signal and LoAir synthesizes a signal exactly one octave below the original signal. The plugin was primarily designed for post-production applications, but it can also come in handy for music production as well.

I had tried this a bit earlier in the year for one of our Nights of Worship, but since I didn’t have a lot of use for it on a weekly basis at the time I opted to wait to add it to the collection. However, after hearing the demoes for some of the music for the Christmas service, I immediately saw a couple places it might come in handy. The bottom-end of the frequency spectrum can give a mix weight, and there were a couple of places I knew I would want to do that.

The plugin can be inserted on pretty much any input or output, but I set the plugin up as if it were an effect. I used one of my Auxes to feed it and returned it to a mono input. I did this for two reasons: so that I could send multiple inputs to it and so I could control its level whenever I wanted. The plugin was then setup to only generate content based on signals 80-100 Hz and which put the synthesized signals below 50 Hz.

I ended up using this in the two special music numbers we did for the service. For one of the songs I simply rode the fader in at the appropriate time, and for the other song I feathered it in to where it felt right in the song.

So, did you try anything new for your Christmas services?

One Response to “New Stuff on Christmas”