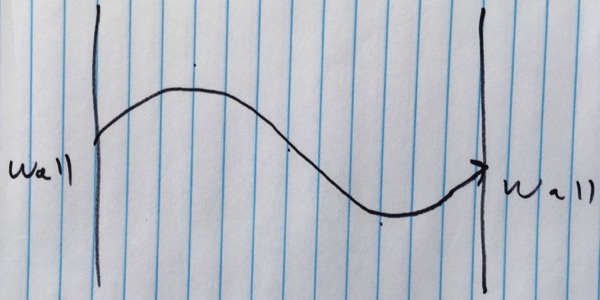 Acoustics are for Everybody

I’ve been getting a lot deeper into acoustic stuff lately especially in regards to small room acoustics, and by small I’m talking about something office or bedroom sized. You know, the kind of space you might put a studio or listening room which I, not coincidentally at all, have been working on lately. It’s been interesting for me because I’m while I’m not necessarily learning a lot of new stuff, I am gaining a new understanding of things. This has got me excited because at this point in my career it has been increasingly difficult to achieve those “light bulb” moments. So settle in because this is going to be a long one.

The laws of physics and what I’ve always known about acoustics haven’t changed over the span of my career, but my understanding of how they affect things is. I’ve spent so much time in larger venues doing live sound and sound reinforcement over the last 12 years that room acoustics have had a different kind of impact on my work.

In my experience, in a large room/venue the predominant effect of room acoustics are on reverb times and slaps. These are both the result of sound reflecting off the surfaces in the room. “Slaps” are the easiest to understand because slaps are just discrete reflections we perceive as an echo or echoes. These tend to come predominantly from flat surfaces loudspeakers are firing directly into. An untreated back wall is a typical culprit as are untreated balcony faces. Windows at the back of a room may also be an issue. These types of discrete reflections are typically most audible when the distance between the source(loudspeaker) and reflection(wall, window, etc.) are greater. I’ll talk a bit later about what happens when the distances are shorter.

Extended room reverb times come from multiple reflections of a sound. The sound basically reflects off multiple surfaces bouncing around the room until it runs out of energy and dissipates. These are indiscrete reflections because we can’t pick them out from everything else due to the sheer number of them. In larger spaces these extended reverb times tend to get longer as frequency decreases because the air absorbs high frequency energy more easily than low frequency energy. This tends to be the larger acoustic issue I hear in most venues as it tends to muddy up and smear the sound we hear which decreases intelligibility and clarity.

Both discrete and indiscrete reflections are the primary reason many of us preach you need to treat the acoustics of your room. Properly placing and aiming loudspeakers so you don’t overly excite the room by hitting surfaces instead of listeners also goes a long way in decreasing these issues, but absorption is key to diminishing any excess reverberations so our audience gets to hear clear sound coming from the loudspeakers we spend so much money on. Those speakers will only be as good as our room acoustics allow them to be.

When we move into a smaller room, like a studio or listening room, there are some different issues at play: flutter echoes and room modes. These are still the result of reflections, but their impact on the sound we’re creating is quite different.

Flutter echoes are sort of the small room version of our large venue slaps. In a small room we tend to get more echoes because our walls are closer together and the sound reflects between them. These echoes are spaced close together in time so they aren’t necessarily heard discretely. If you clap in a rectangular room without any furniture or wall treatments, you can typically hear flutter echoes quite clearly; they usually sound like a metallic ringing. In practical terms, flutter echoes add an additional pitched tonalities to what we’re listening to. They skew the frequency response of what we hear while also smearing it a bit. This becomes a problem because that skewed frequency response will lead to misguided EQ decisions. Broadband absorption and/or diffusion is the principal way to deal with flutter echo.

Before I added my new acoustic panels to my studio, I had enough carpet, curtains, posters, photos, and other miscellaneous stuff spread across the walls and throughout the room that flutter echoes weren’t an issue. Fully furnished rooms in your own home might not have major flutter issues, either, because the furniture provides a mix of absorption and diffusion for these reflections.

The traditional and often textbook recommended way of dealing with flutter echoes in recording studios is to build non-parallel walls. However, one of the things I’ve been learning lately is that may not always be the best solution because of room modes. Room modes exist in every room, but they are especially problematic in smaller rooms.

So what’s a room mode?

A room mode is basically an audible resonance. These occur based on the dimensions of the room because sound frequencies have a physical wavelength. When our dimensions match a particular wavelength, that frequency and its harmonics end up with audible peaks and nulls throughout the room because as sound reflects off the walls the phase relationship between reflections creates varying degrees of cancellation. Maybe a quick sketch will help explain this phenomenon better.

Let’s say we have a frequency whose wavelength exactly matches the distance between two walls in our room. You can see this wave in action pictured above. Now, let’s see what happens within the room’s geometry when that sound reflects off the opposite wall.

Now think back to high school physics. What do you think will happen when we combine these two waves? Let me add a couple notes to my sketch to help you out:

If you’re thinking we’ll get cancellation of that frequency in some places and varying degrees of cancellation throughout the rest of the room, you are correct. The problem will also exist for the various multiples of that frequency otherwise known as harmonics along with the frequency whose wavelength is twice the dimension between walls. In reality we won’t get complete cancellation because the strength of each reflected wave will diminish over time as its energy is absorbed by the air, surfaces, and other stuff in the space. However, we can still get some alarmingly deep nulls in the room.

For example, let’s say the walls in the above sketches are 14′ apart. 14′ is the approximate wavelength for 80 Hz which means 40 Hz and 160 Hz will also give us problems. In addition, 120 Hz will have problems because it’s the third harmonic of 40 Hz. We can physically see where our nulls will approximately be within our room in the diagram below.

These are called axial room modes. They occur between 2 parallel surfaces so you can easily calculate them if you know the dimensions of your room. Just make sure not to measure the distance between your floor and ceiling. In addition there are also tangential and oblique modes, but axial modes are considered to be the strongest. I’ll let you dig deeper on your own if you want to know more about this stuff.

Pay attention now if you’re setting up some kind of a control room for mixing whether it’s for broadcast, music production, or audio post-production.

If we know where the nulls are in our room, we can make informed decisions on where the ideal place(s) will be to listen in the room in order to hear everything. In other words, we don’t want to sit in the center of the nulls if we’re making critical mixing decisions.

For example, look at the room mode calculation above and exchange the word “width” for “length”. I’m not going to want my listening position at 42″ or 63″ from my front wall because I’ll be in two rather large nulls. In practical terms, I would probably try and sit between 63″ and 84″ in this case, and I would also try and make sure nobody is evaluating my work over my shoulder in one of those nulls.

So is there anything we can do about room modes?

Sort of, but I’ll save that for when I get into the specifics of what I’ve done in my studio. I will say this, though: you CAN’T fix a room mode with EQ. It is fundamentally a phase issue created by the physical space, and EQ doesn’t fix phase….well, actually I’ll say “usually” doesn’t fix it because I can think of cases where I’ve seen it do exactly that. In this case, though, I am confident in saying EQ will NOT fix a room mode today.

Do room modes matter in my performance space?

Possibly. Room modes are happening in every room because the laws of physics don’t change. However, the dimensions of a performance space often shift room modes out of a range that matters in practical terms.

For example, if one of your space’s dimensions is 50′, its modal frequencies are at 11, 23, 34, and 45 Hz. The 45 Hz nodes could create some seats with issues, but I would guess the interaction between your subwoofers will have a more dramatic effect on where peaks and nulls show up in the room.

Based on my calculations the most likely place you’d experience issues in a performance space is vertically between your floor and ceiling. Again, these issues will likely be in the range of your subwoofers where coverage is already difficult to get right, but you could notice issues when people move between sitting and standing.

There are a few more performance space scenarios to consider, though.

What kind of space is your FOH located in? Are you in a section carved out of stadium seating or some kind of structural booth? If you have side walls in your FOH area at head height, these could cause issues in addition to corner build-up issues where those walls join each other and meet the floor. If your FOH position is still in a separate room you have the potential for all of our small room acoustic issues in addition to listening in a completely different space from the audience. Mixing under a balcony can present issues as well. Again, the floor to ceiling dimensions will likely cause issues.

While in some ways all of this explanation might be a simplified interpretation of acoustics and how they work, but my hope is you can at least understand that acoustics matter to all of us as audio engineers. I’ll be back soon with some specifics on how I’ve been approaching the acoustics in my studio. In the meantime, if you have any questions, thoughts, or ideas about acoustics, I’d love to hear them in the comments.