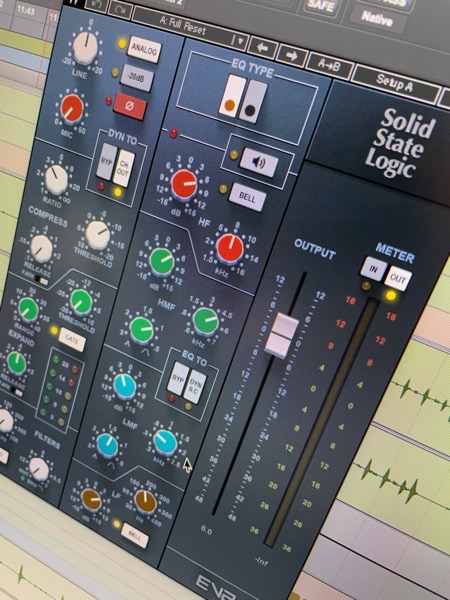 A big reason why myself and a lot of engineers choose the equipment we use that often goes unmentioned is something very simple: familiarity.

Like most engineers, I get hired for the results I get. People don’t care what compressor, mic, DAW, console, etc. I use so long as their stuff sounds great in the end. While I care about what I’m using and that it sounds great, at a certain point those qualitative choices don’t make as much of a difference to me.

For example, let’s say I’m choosing a vocal mic. In one hand I have a cheap, off-brand music store vocal microphone and in the other I have a touring grade vocal microphone. Listening to those mics side by side will likely reveal a difference in sound quality. Choosing the touring grade one will be a no-brainer, in theory, because it will sound much better.

Now, if I have a touring grade mic in one hand and a different touring grade mic in the other, those differences probably aren’t so much about quality any longer. One may work better than the other with some voices in some contexts. In most cases, the reality is likely that both of them sound great, and both are capable of getting great results. That makes the choice between the two more about taste and, in many cases, familiarity.

Here’s another example. I like and prefer using Shure SM57’s or Beta 57’s on snare drums. Contrary to what some engineers might have you believe, they are great microphones. Are there other microphones that work great on a snare drum? Of course! These days I get sent tracks recorded with a variety of different microphones.

I’m extremely familiar with them. I’ve been mic’ing snare drums with 57’s for over 20 years, and I know exactly what I’m going to get with them and how to make them work. I can’t tell you how many times I’ve gone into a church, swapped out some fancy esoteric mic with a 57, tweaked the position for 10 seconds, tweaked a few settings on the console for another 15-20 seconds, and had the snare sounding the best they’ve ever heard it. That’s not a knock on that fancy mic, though. I’m just far more familiar with a 57.

I think familiarity can be as important if not MORE important than the gear itself. I think we often put too much stock in the cool or fancy gear. We get seduced by the price tag or brand, but then we don’t put in the time to get familiar with it. And getting familiar with something always takes time.

Too many engineers believe they can just buy a black box and have it fix everything. New gear might be a right step, but it’s just one part of the equation. You also need the chops to use it and enough familiarity with it to get the most from it.

Now, none of this means you shouldn’t experiment. I still love to experiment. I may prefer a 57 for the snare, but I still try new things on it from time to time because I don’t want to do something a certain way just because I’ve always done it that way. Plus, I think experimentation is part of the road to familiarity. I just usually have a separate time and place for doing it.

For example, I use a lot of old sessions in my studio to try out different techniques and plug-ins all the time. I will occasionally try something new and different on an actual gig and never would have discovered how much I loved certain mics on things if I hadn’t experimented this way at some point. Trying something on a gig is always a calculated thing for me, and I don’t spend a lot of time experimenting with something on a gig. The results have to be obvious and immediate, and I always have something familiar ready to go in case the new thing doesn’t work.

So how do you get familiar with something?

As I mentioned, it takes time so I think you have to make time to get familiar. I almost always demo equipment before purchasing it especially if I already have something available that does the same thing. If I’m going to be working on a new console for the first time, I always find a separate time to spend on it before the gig. I find this especially important in church scenarios where there is often a lot of proprietary setup stuff happening that I need to understand.

Then it comes down to just using the thing a lot. When I have something new I’ve invested in, I force myself to use it. That might mean using it on my own time to figure everything out as well as trying it on every project that comes through my studio. I might not always use it on a final version of something, but I force myself to try it for a bit on almost everything.

Now, you might be thinking, “Isn’t it easy to use something new a lot?”

I think there is almost always a motivation to use something new, but it’s not always easy to use it. For example, I recently added a new flanger to my plug-in collection, and I’ve been looking for creative ways to use it but it’s not something I can use everywhere I want. Larger apps and bundles can also be challenging because there might be a lot of features that don’t need to get used all the time. I spend a lot of time using Izotope’s RX for de-noising and restoration work, but there are still things I’m figuring out in it because it’s so dense.

So what is something you wish you were more familiar with when it comes to audio production? Please leave a comment and let me know.