Today’s non-negotiable for great audio is something I’ve been finding to be a mixed bag as I’ve begun working in a wider variety of environments.

It’s been quite surprising to me to see the state of soundchecks in churches these days, and it’s clear to me this is still a very misunderstood concept.

First, let’s talk about the difference between a “Line Check” and a “Soundcheck”. A “Line Check” is where you check to make sure everything works. This ensures that things are patched correctly and that the lines and connections are clean. “Soundcheck” is where you check the actual sounds things are making and, hopefully, the context they’re going to make those sounds within. This is also the crucial point where monitor mixes are created.

One of the bigger challenges I’ve faced lately has been getting used to taking charge of soundchecks, again. For many years I’ve had either music directors, worship leaders, or monitor engineers run the show, and I’ve gotten very complacent and let it just happen. But lately I’ve been in a lot of environments where monitors come from FOH, and I haven’t been doing the best job at running soundchecks. If there’s one thing I’m going to be working on over the next year, it’s getting my chops back on running soundchecks.

There’ve been a lot of things written by a lot of people about soundchecks so I’m not going to get too specific here on procedures, but I do have some tips/observations to add.

First up, soundchecks should be systematic. They should follow some kind of order. Personally, I prefer a “build” style soundcheck where one instrument starts playing and additional instruments are added to the current instrument playing until you get the whole band going. Over the course of my live sound career, these have also been the most successful method of soundchecking I’ve seen.

An extremely important component to any form of mixing is managing relative levels between sources. One of the problems I often see is each instrument gets played in isolation during soundcheck, and then everyone assumes they’re ready to go only to need numerous changes after taking a stab at a song together. Then changes get made, once again in isolation, and the process repeats until everything is either worked out or, more likely, time runs out.

Soundcheck doesn’t just need to be one procedure, though. It can be a series of events. For example, a solution to this might be to divide soundcheck into two components: initial soundcheck and monitor mixing. Start soundcheck by going through every instrument to check its level and sound. If you’re in a situation where solo’ing things in place isn’t going to work, this is also your opportunity to listen to everything on its own, move/change mics, and offer suggestions. This is also a great opportunity to make sure each player can hear themselves clearly. I like to make sure each person gives me their loudest level here, too. I also tend to do this as the band comes in and starts setting up. In other words, they often don’t know they’re soundchecking when it’s happening which, depending on the band’s feelings about soundchecks, could be a good thing.

Next move on to building monitor mixes. If the band isn’t capable of just “jamming”, I’d suggest starting with a faster/louder song. I recommend making sure everyone can hear vocals ahead of time so that a voice can lead soundcheck, but when building monitor mixes I prefer to start with the loudest acoustic instrument on stage. I do this because it’s a given level that’s not really going to change, and everything will need to rise to it if its level can’t be changed.

One thing to remember is monitor mixing, much like mixing for sound reinforcement, is about filling in the blanks for musicians so they can hear what they need to hear. There might be instruments and backline on stage that are already loud enough to hear, and the spill from the PA might already provide the band on stage a bit of reference. The monitors should provide the missing information for the players much like the PA provides the missing information for the audience.

So start with the loudest thing on stage and start adding instruments. As each instrument is added, check with each band member to see if they need more or less of the new instrument. Hand signals are a great way for musicians to communicate things so long as there is clear understanding of those signals. Don’t be afraid to clarify things with the band here. For example, does a thumbs up mean someone needs more or that the level is good?

One last tip I’ll add is to treat soundcheck like its the only time you’ll hear the band through the PA. I know a lot of churches soundcheck and then start rehearsing, but I think this can be a dangerous thing to rely on as a mixer. When I played and mixed in clubs, there was no rehearsal. I’ve also seen rehearsals cut short for a variety of reasons. So try and get a song at the end of soundcheck. Ideally, you should be ready for the doors to open after soundcheck.

Regardless of how it happens, there really needs to be a systematic soundcheck of some sort in place if there’s going to be great audio. When there’s no soundcheck or an abbreviated one, I find myself working up-hill in putting together a mix. Using a systematic approach makes sure you cover everything and usually ends up saving a lot of time in the process.

Soundcheck’s aren’t always fun, but who said they’re supposed to be. Think of it like getting ready in the morning. You’re not going to go outside before you get dressed and take a look in the mirror. In the same way, you don’t want to let the band go up on stage in front of a crowd without a good soundcheck. 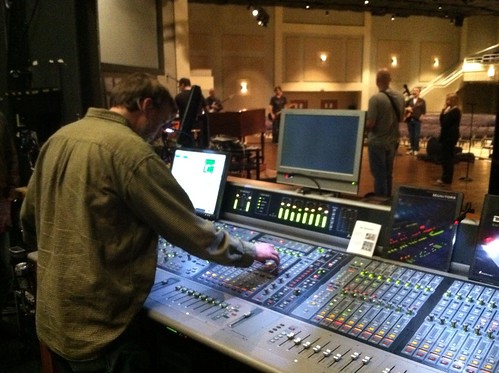