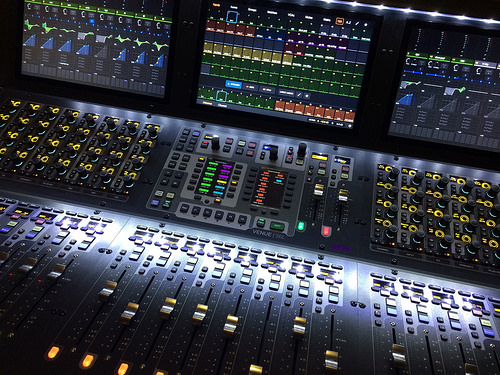 I’m continuing today with another of my non-negotiables for getting great audio:

So, this is kind of subjective, but the basic premise is when I’m mixing the console needs to be set up in a way that is intuitive to operate.

Mixing, in my opinion, is much more of a creative endeavor than technical so the console and even complete FOH configurations are particularly important to me because if I have to think about where to find something it pulls me out of the mix. Part of the intuitive side of things comes from the console design itself, so there’s not much we can do about that aside from mastering the desk in front of us. However, there’s still a lot that can be done in terms of setup that can help things out.

For starters, the setup of the desk should be deliberate. Things should be placed and arranged for a reason. If you’re the only person working on the console, then by all means go ahead and put things wherever you want so you can reach for things intuitively. Chris Lord-Alge, for example, lays out his studio console in a specific manner I probably wouldn’t try, but the reason for the approach is something I heavily advocate:

I try to always have the same instruments and effects coming up on the same tracks on the 3348 and the corresponding channels on the console. On the console, 1-4 are delay effect returns, 5-6 percussion, 9-16 keyboards and/or percussion, 17-24 vocals, 25-32 guitars, 33-48 drums, 49-52 stereo reverb channels. If everything is parked in the same place, all you have to worry about is the song. When you’re mixing you want to eliminate all the things that make you think outside of the song. It’s an ergonomic issue more than anything. When you know where your outboard is, you can begin with your favourite compressor. You have a good starting point, and then you can start to change things if you want.

Chris Lord-Alge: Sound on Sound May 2007

If you have multiple engineers working on your desk I’d suggest sticking with a more traditional festival style layout that most experienced engineers are used to. Typically this amounts to grouping the same type instruments together and placing them in this sort of order: drums, bass, guitars, keys, vocals. Keys and guitars are sometimes flipped, and these days there might also be lines for tracks somewhere in there. FOH Magazine ran an article several years ago that explained why this arrangement came about in more detail, but it basically comes down to the visual look of a traditional stage.

The original best practice for console layout was to arrange the instruments from upstage to downstage and house left to right. In the traditional rock and roll stage, drums were usually farthest upstage so they kicked things off on the inputs, followed by a bass player a little downstage of the drums. Then the keys would usually be next downstage a bit more followed by guitars and finally vocals. An important note here is inputs would also be laid out from the visual perspective of the FOH engineer. For example, the stage right/house left guitar player would be on a lower input than a stage left/house right guitar player.

This is still a great basic strategy, and if you have a lot of rotating engineers it’s a good way to set things up. I expect a console to be arranged following a similar strategy when I walk in for a one-off and most engineers I know feel the same. Kick drum goes on Input 1, and everything goes from there.

When I look at the stage and see someone playing an instrument or singing, I naturally expect to find them within their instrument group based on how they appear to me at FOH. If you haven’t been setting up your console this way, you would be amazed at how quickly you’ll get used to it if you start doing it. One exception I might make is to keep a lead singer separate if there’s only one of them, but these days most churches I work with feature different leads on each song so having the layout visually match what I’m seeing makes a huge difference when I’m in an unfamiliar environment.

Another key part of console setup is how things are labeled on the console. Inputs should be labeled in an easy to understand fashion, and you’d be surprised how easy it is to drift on this. For example, let’s talk about inputs coming from video world. In the past I’ve taken part in creating strange acronyms, and I’ve seen an even stranger array of acronyms used to label consoles through the years.

Those acronyms usually only mean something to the people who create them. “Video 1” or “Vid 1” and “Video 2” or “Vid 2” say way more than “HDV 1” or “SDI C” or whatever you want to call things. I’ve been places where each video machine has been given a name like “Bob” or “Susie”, and the console was labeled as such. Again, that means nothing to an average engineer.

I recommend labeling things as what they are whenever possible. Abbreviations are fine so long as they are intuitive or a standard. For example, “gtr” for “guitar” or “kick” for “kick drum” or “sn t” for “snare top” or “vid” for “video”. Another option is to name things as the programming element they fulfill. For example, “Pre-Show Music”, or “Intro Video”. Using less characters to label something is generally better especially with digital consoles, but clear explanation wins over that, in my opinion. A good way to approach this is to ask yourself, “Will someone need an explanation on what an input is when they see the label?” If your answer is “yes”, then you might have labeled it wrong.

I believe an engineer should be able to look at a run sheet and be able to put it all together on how to run the event/show/service with minimal questions. Many of the systems we encounter and create these days can get pretty complicated which makes complex “engineer acronyms” almost a necessity. I think that stuff is fine for patch and input lists where those details can be much more important, however, on the console side simplicity and intuitiveness wins.

So to sum this all up, the console should be set up in a way that makes it easy to operate if you’re going to achieve great audio. If myself or another engineer is struggling to operate equipment because of a complex setup, the mix is going to be a struggle to create.

If you’d like some help, strategies, or ideas on setting up your console and audio systems in general to make them more user-friendly for your staff and volunteers, that’s part of what I do now. Contact me and let’s set up a time to chat. 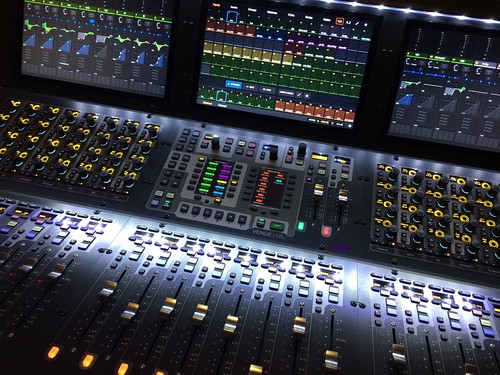 3 Responses to “The Non-Negotiables – Part 4”