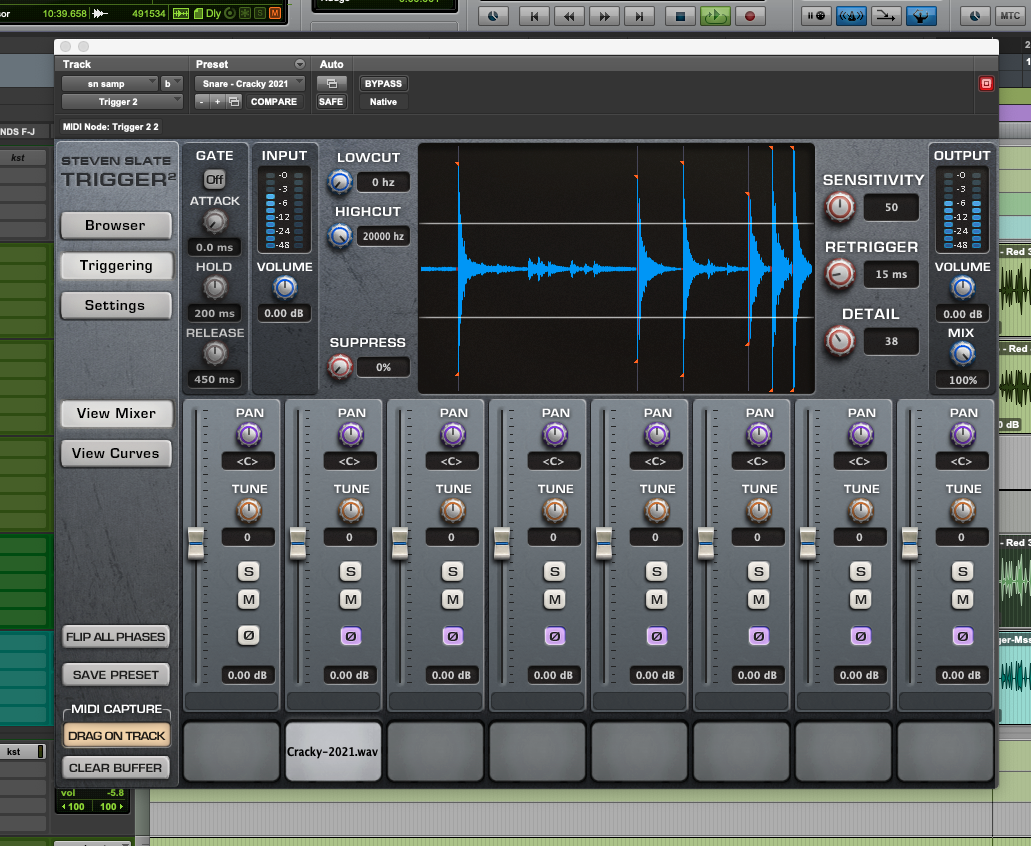 Drum samples have a mythical and mysterious quality these days. There’s nothing mythical about them, though, and I’ll let you in on a little secret:

There is nothing special about drum samples. They are simply recordings of drums that have sometimes been processed a bit. Seriously, some of them are absolutely no different than what we are able to capture ourselves with a drum and a microphone aside from the fact that maybe they were recorded in a real studio. Even when that’s the case, many of the top mixers who employ samples do their own processing to them for their mixes just as if they were working with a real drum because it is a REAL drum in most cases.

Speaking of top mixers, contrary to what you might have heard or thought, drum samples are not typically used in recording projects for complete drum replacement. I’m not saying it doesn’t happen or that I’ve never done it, but more often drum samples are used to augment and supplement an existing recording. This has become especially true as recording and mixing budgets have shrunk and engineers have looked for time saving ways to get results. Adding a sample with a characteristic that isn’t easily apparent in the recording is sometimes a better and/or faster way to get to a sound than trying to create it and dig it out.

Drum samples aren’t a new thing, though. When I had the chance to spend some time with Tom Lord-Alge a few years ago, I asked him how long he had been using drum samples in mixes. He said pretty much since the beginning of his career. That dates their use to at least the mid-1980’s which is just shy of 40 years ago for those of you who don’t feel like doing the math.

Most samples in use are referred to as “one-shots”. A one-shot is a single hit of a particular drum. It might be the greatest single drum hit ever, , but these aren’t magic bullets. If that one-shot is the only drum sound ever heard, it will likely become very artificial sounding. This is why electronic drums are often frowned upon.

When a drummer hits a real drum there is always a little bit of variation between each hit. Even the greatest drummers in the world land their sticks in a slightly different location on the head at a slightly different velocity with each successive hit. These tiny variations are what we are used to hearing with a drum, and when we remove those variations the drums sound fake and often exhibit the maching-gun effect.

The “machine-gun effect” is the result of every drum hit being the exact same hit noted for its similarity to the consistency of a machine-gun. Sometimes we can get away with it, but I feel like the effect becomes much more pronounced the faster the drummer is playing. For example, a 16th note fill might sound OK, but if the drummer throws in 32nd notes the artificiality of the drums suddenly stands out. By the way, this might be a good thing to understand if you are currently using electronic drums.

Some modern virtual instruments and sample replacement programs use “round-robin” samples where each drum is comprised of different hits. So instead of just a one-shot, the sampler triggers one of several slightly different one-shots with each hit to create a more natural sounding performance. Sadly, I haven’t found many electronic drum brains that will do this as of this publishing.

This is why many engineers only use drum samples to augment a performance. That way they get some of the natural sound from the real performance coupled with the consistency and characteristics of their chosen sample(s).

I’m bringing all this up because I know a lot of churches are obsessed with drum samples these days and are making great efforts to use them. Some even think there is no way to achieve a certain sound without them.

The truth is you don’t need drum samples to get a great drum sound or even the drum sound you’re after. I know this because I’ve been asked for many years by musicians and engineers what samples I’m using after a day of mixing FOH, and they are almost always astonished to find out I’m not using any.

Now, what if I could show you how to get the drum sounds you want with the drums and equipment you already have? Are you ready to improve your drum sounds this year?

Drums are often a big thing we work on when I’m training staff and volunteers at churches. Not only do do I help churches get the sound they’re after, I teach them how it’s done. I am also helping churches get great sounds remotely now through coaching as well as building custom signal chains and broadcast DAW templates.

Want to improve your sound this year? Let’s chat.