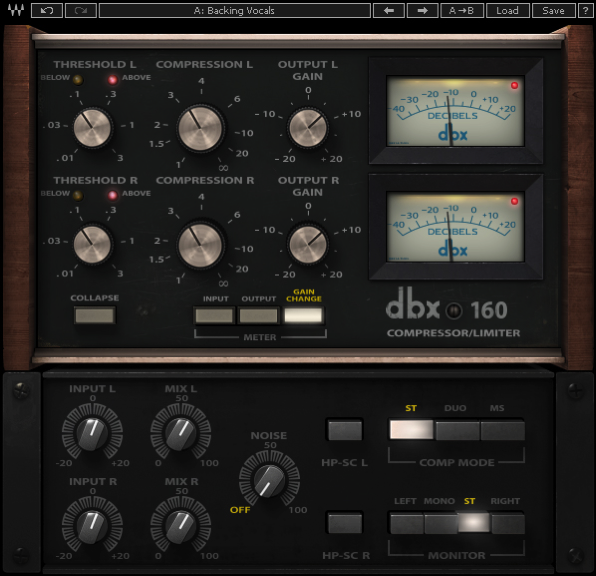 Ever since I published my Fitting and Sitting article, I’ve been wanting to get a little deeper into some thoughts on compression and dynamics because I find the subject fascinating. Getting dynamics properly controlled is often an integral part of having a great mix, but at the same time there can be a lot of voodoo and black magic to the topic.

I hoped to get this out a few weeks ago, but unfortunately it’s taking me longer than I want to narrow down some thoughts thanks to recent travel. I also didn’t want this to get lost in the Easter craziness I know some of you likely experienced last month. Hopefully I can finally get some of these ideas out there, though, beginning with today’s article.

For example, let’s say we have an input where the gain reduction is constantly swinging between 6 dB and 0 dB, but on another input the meter is sort of holding and dancing between 8 dB and 6 dB of gain reduction. Which of those two inputs do you think is actually being compressed more?

I know a lot of guys would immediately say the second one because the gain reduction meter hits 8 dB which is the larger number, but is that really the case?

On the one hand our first signal is changing up to 6 db at times. On the other hand, our second signal is deeper into attenuation at times, but since the needle is dancing between 6 and 8 dB, we’re really only getting 2 dB of level change on it. If the idea behind compressing something is reducing its dynamic range, which of those two inputs is actually getting more reduction? The one swinging 6 dB at times or the one that’s really only moving about 2 dB?

So, a lot of my thinking and application of compression over the last few years has been evolving, and this is something I don’t really see talked about much. In my opinion, gain reduction does not equal compression. Gain reduction is simply the amount of attenuation the compressor is doing. I know I’ve been guilty of referring to those gain reduction numbers as “compression” many times in the past, but at this point I just don’t see it that way and I’ve been trying to correct my language.

For example, think about what happens if we feed our compressor with a signal with zero dynamics such as a 1k sine wave. If we adjust the threshold of the compressor to get 3 dB of gain reduction and then apply 3 dB of makeup gain to our signal, bypassing the compressor will reveal there is no sonic change and no compression happening. We’re simply turning the signal down 3 dB with the compressor and then turning it back up with the makeup gain.

You see, in order for compression to happen we need to the compressor to actively work.

So let’s think about that gain reduction meter. What’s the point of having it?

So, I think this brings up a question: why do engineers often talk about only doing “x” dB of gain reduction on something?

A challenge in using compressors is you can do some significant damage with them because compressors may work so quickly on a sound that in addition to changing/managing the “loudness” of a sound they may also reshape the entire envelope of the sound. This can actually be a very cool thing to do, but newer engineers often have a hard time recognizing that they’re doing this and sometimes get it wrong. So we’ll often talk about gain reduction as if it’s actually compression and caution against doing more than, say, 3 dB of “compression” because 3 dB is a pretty safe amount but often enough to notice a bit of change.

Of course, being safe is boring. Plus, you need to learn how to hear what this stuff is doing, but I’ll save talking more about that for another article.

Now I know I’ve written in the past about how you should never put something into gain reduction at all times. Once again, that’s a safe way of operating but not always the most effective use of compression.

I know. I know. I know. This goes against a lot of stuff that gets said and has been written, and I’ve been guilty of contributing to those ideas. But the reality is, there are times when I put things into compression at all times.

In the meantime, I recommend you try and start thinking of the movement of the gain reduction meter as more of an indicator of the amount of compression or “control” you’re putting on something, and if you go back to my Compression, Yes You Can article you’ll remember that the compressor’s RATIO is how we adjust the amount of control we put on things.

Finally, let me leave you with one good caution about using compressors for live sound before you start experimenting putting loads of gain reduction on things at all times. Take a vocal, for example. Let’s say I have a compressor constantly working on that vocal doing as much as 6-8 dB of gain reduction. As a result of the attenuation from the compressor, I’ll probably put about 7-8 dB of makeup gain on that same vocal to get the level back where I started. The danger with this is at some point that vocalist is going to stop singing and the compressor is going to release which in effect will turn that input up 8 dB above where it started. So, before you start doing gain reduction on something, it’s not a bad idea to understand how much gain before feedback you have left in your system. For example, if your vocal mic starts feeding back at +5 above unity, adding 5 dB of makeup gain in your signal path could run you into trouble at some point.

I’ll have more thoughts on compression soon, but what have you been discovering about compression lately?

2 Responses to “The Dancing Needle”