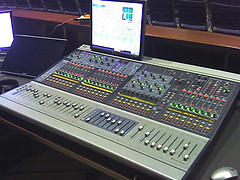 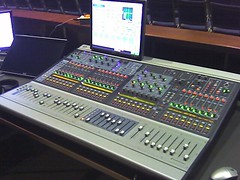 Digidesign and Clark ProMedia were very gracious to setup an on site demo this week of Digidesign’s newish control surface for the Venue, the D-Show Profile, and I was able to spend a fair amount of time over the last two days driving it.  Set up was a breeze since we’re already using the Venue.  I simply unplugged our existing D-Show and connected the Profile to our existing FOH rack.  I spent Wednesday morning building a mix from scratch using an old Sunday, and then I used the afternoon to run our entire night of worship from last week to see how it handles moving through actual cues.  In the evening I put a volunteer on it to mix rehearsal.

Here’s what I really liked about the console:

– Small Footprint
A couple of our volunteers commented that they didn’t think the console looked big enough for our auditorium, but I LOVED the size.  There are 24 channel faders plus 8 for the master section and they are ALL within reach.  On the full size D-Show the faders at the far ends of the console are a stretch.  The other benefit to this is in a 64 channel config, all the banks are usable.  On a D-Show, you typically end up with a half dozen faders left overflowing onto the C bank, however since there is currently no way to move them closer to the master section, these channels are typically worthless because they’re hard to reach.

– No Trackball
To some this might be a negative, and I intially thought this would be a struggle.  However, it actually worked out better, and I didn’t miss it at all.  It forced me to use the controls on the console which is something I’ve been stressing to our volunteers to do.  I firmly believe adjusting plug-ins with the encoders is more accurate than using a mouse and this forces that.  I hooked up a mouse to one of the USB ports for doing some of the more administrative tasks such as creating snapshots and filing, but beyond that the mouse/trackball is relatively unnecessary for my use.

The one thing I did think the lack of trackball would be hard on is for trying to tap a tempo on the fly into the Echo Farm plugin.  For my uses it’s not a big deal because I get song tempos from the music department and program them into the cues, but tapping on the fly would be a challenge I think.  Hopefully Digidesign will just finally add a way to tap a tempo since everybody has been crying for it for a couple years now…

– 2 line LED strips
The two line LED scribble strip is great.  The top line displays what the encoders are currently controlling and displays the value as you adjust it.  This felt more intuitive than the way it works on the D-Show.

– Insert Mode
One of my volunteers commented that he would use Insert Mode more on the D-Show if it worked the same as the Profile.  Insert Mode assigns encoders to plugin parameters for easy adjustment.  On the Profile, the encoders directly over the master section faders serve this duty.  The cool thing is thanks to the 2 line LED strip, the bottom line displays the parameter name and the top line shows the value.  This worked great for working EQ plugs with more than 5 bands where the controls don’t all map to the onboard EQ controls.

– Encoder LEDs
These seem a bit easier to read.  I think this is primarily due to the angle of the surface and size of the desk.

– 8 function switches
D-Show only has four, and I could use more than four since I like programming things to them with the events manager.

– Master Section
It’s closer to the center of the console where I think it should be.  I wish the master section and input faders on the D-Show main unit were flipped so that I could get this layout on a regular basis.  At some point this summer I’m going to try and flip the sidecar and main unit because having VCAs and groups closer to center rocks.

– EQ layout
On the Profile the EQ encoders lay the bands out left to right instead of top to bottom like the D-Show.  The EQ encoder layout isn’t as “analog” in appearance, but the encoders match 90% of the plugin layouts.  I think this would help some of our volunteers who have a tendency to get the bands out of order when they start EQ’ing; it is tough trying to help someone with a mix when you reach for the high EQ only to find out it’s down at 200 Hz.  This layout isn’t a solution, but I think it might prevent that type of thing.

Due to the smaller size of the Profile, there are some feature controls that you will only find on the full blown D-show.  None of these would be deal breakers for me, though, but I definitely got used to having these while working with the Profile:

– No Pan width control encoder
I couldn’t find it if it’s there.  This would be the ONE thing that drove me the craziest about missing.  You can control the width for groups, but not on individual stereo channels.  I have found this control invaluable since I started running the console in LCR.  Our center divergence is set to 50% and when you don’t reduce the width a bit on stereo channels, you end up with no sound in the center channel.  This should be an easy software fix that they really need to do.

– No Input Direct button
Again I couldn’t find it if it’s there.  This is a cool feature on the D-Show that let’s you bypass all your processing.  It’s a great training aide because you can tweak and then A/B against the original source.  It also helps me identify problems that someone might be trying to fix with processing when the solution is more of a mic placement or source thing.

– No independent banking of the sidecar
There is no sidecar so obviously you can’t do this.  However, being able to bank 8 of the faders independently on the D-Show is great for handling transitions in services.  I was able to work around this a bit with strategic console layout.  When I first started using the Venue you couldn’t bank independently at all, and I got by before.  Not a critical thing.

– No selected channel fader
This again is something that helps enormously with transitions where you have faders on multiple banks.  The Main fader on the Profile should be selectable for this.  I never touch the mains and would gladly give up that fader because I’m tired of non-audio people thinking that it’s the main volume control; since we have subs on an aux, turning the mains down leaves the subs up.

– Dedicated selected channel controls
I missed the dedicated HPF and pan encoders.  No big deal, but I kept reaching for them.  Another day and I’d be used to using the channel encoders.

– Gate controls for each fader
On songs that start quiet and build, I like to turn the tom gates off and pop them back in manually when the crash cymbals become ride cymbals.  On the D-Show I have individual buttons for each fader,and I can turn all my tom gates on and off at the same time.  On the Profile you would have to select each channel and do them one at a time; although I wonder if pushing the channel encoders with the gate threshold selected would work to do this–I didn’t get to try it.  This could also easily be worked around using snapshots.

– Selected channel controls layout
This felt a little clunky to me with controls scattered all over the console due to the smaller size.  This would be very easy to get past, though.  After about 7-10 hours on the console I was moving pretty fast on the Profile; I think I’m just too used to the full size D-Show.

Another downside to the Profile layout is that the layout in the software pretty much matches the layout on the D-Show.  This makes it easy to train volunteers for where things are on the D-Show because they can download the standalone software to their PC and play around to get their bearings.   But again this isn’t a big deal.

The Profile rocks.  I’ve been mixing on the D-Show for 18 months now so I’m VERY used to where everything is and what everything can do, and unfortunately that probably gives me a bias towards one surface over the other.  But if I was on a more limited budget, I would take this console without blinking.  The D-Show and the Profile use the exact same hardware on the audio side of things–same stage racks and FOH rack.  You can take this all the way up to 96 inputs and get the exact same amount of processing power for your virtual racks (plug-ins).  The shows and services I mixed on the D-Show load up exactly the same on the Profile.  So when I talk about limited functionality with the Profile, I’m speaking in terms of controlling functions and not the actual functions.  For example, the “Input Direct” button that I couldn’t find on the surface is still there in the software along with the “width” for stereo channels.

If I had never mixed with the D-Show before, I might actually lean towards the Profile instead due to its smaller footprint.  When you get in front of it and have everything you could ever need for mixing right in front of you, it’s pretty cool; the D-Show goes a long way towards this, but the Profile does it tighter.  If I was going out on tour, I would probably even look into purchasing my own Profile to rent to clients because you get all the power of the Venue in a smaller space.  For churches looking to raise the bar on the audio side, this is going to be a hard console to beat.  I definitely recommend checking it out if you’re looking to go digital.

One Response to “Test Driving the Profile”